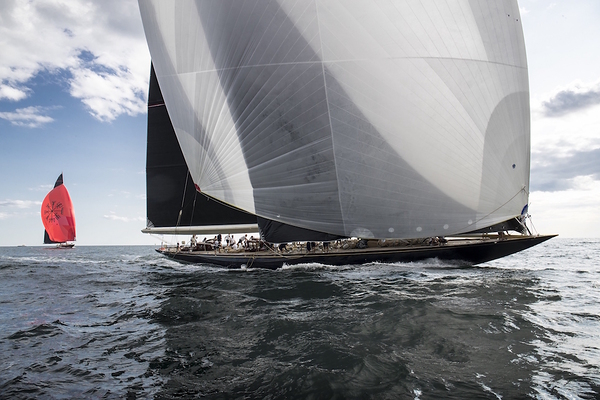 Rhode Island: The long, five and a half hour wait for the Newport sea breeze to arrive proved to be well worth it as the six J Class World Championship teams were rewarded with their closest race yet.

Ranger scored her first win of the regatta on a fast improving scoreline, but her delta over second placed Lionheart was down to only one second. And the margin between Svea in third and fourth placed Velsheda was also one tiny second.

With Lionheart crossing in second and Hanuman languishing in sixth, unable to come back from a poor start and being manacled to what proved to be the less favoured right by Topaz, it is the Dutch flagged Lionheart that goes into the final day of this inaugural world championship event with a lead of four points over the US team Hanuman skippered by Newport's Ken Read.

Lionheart is now in a strong position to become the first J Class World champion, adding to her wins in Bermuda at June's America's Cup Superyacht Regatta and the America's Cup J Class Regatta.

“Tomorrow it is all on.” Lionheart's mainsheet trimmer Mike Mottl affirms. “We will treat it like the beginning of the regatta.

“We have two races and the points are still such that any boat can win it. We have to believe there will be two races and just go out and do well. We know that we can do it. We just have to go out there and do it.”

Principal Race Officer Tom Duggan and his New York Yacht Club race committee made the call to hold the fleet ashore whilst there was still a seemingly decent northerly gradient breeze blowing. After going to sea a little after 1330hrs, hopes were waning until at the breeze filled for a 1630hrs start and the historic six boat fleet got away in 8-9kts of breeze from the south west.

“It was a long, long wait but it was rewarded by a very, very good race. It was a difficult day. Once you have made that call not to go out early then you own it and you just hope that it works out. It worked out today. We got lucky.”

Ranger, with multiple America's Cup winner Murray Jones on tactics and Erle Williams skipper-helm, read the first beat best, holding to the left after starting fast and clean as the leftmost boat, clear of the cluster at the signal boat end of the line where the perceived logic seemed to be that the 'usual' right would pay.

Hanuman was held late at the boat end and then had to live to leeward, in check by Topaz while the middle left yielded a solid shift in wind direction to the left. While Ranger neatly lee-bowed Lionheart to lead around the top mark, early challengers Svea were penalised for tacking too close to Ranger on the final approach to the turn.

With title rivals Hanuman being boxed out to the right Lionheart sailed a solid, smart, safe beat to round second at the first top turn. They separated slightly to the left of the run and made a small gain on the leaders, but the white hulled 2003 built Ranger prevailed across the finish line.

“We are sailing a lot better and building a bit of momentum. The smoother water is better for us. We blew out the light medium which was a very deep sail, so we have the new heavy number one (headsail) and it is just fast,” Ranger's Erle William commented.

“We are able to compete. Murray Jones has been doing a great job for us. We got off the line well and the others were bunched up, we got away nicely with Lionheart and we sailed a good race.

“It was nice to be able to lee bow Lionheart at the windward mark and get our nose in front. Then they got back on the run, we were able to lee bow them again at the top of the second beat and stay ahead. With it down to just one second it just shows how close this racing is. Tomorrow is another day, but give us 12kts and flat water, that would be nice!”

Ranger have now gone 3,2,1 from the last three races – equalled only by title favourites Lionheart – to stake a claim to third, meantime.

In contrast Hanuman's title challenge has been derailed by a fifth yesterday and now a sixth. With a four points deficit, the hugely talented Hanuman team may face a tough test to win overall but it is well within their reach, particularly if two races are sailed.

An early start time of 1000hrs is scheduled for Saturday. Two races are planned with a final race deadline of 1400hrs after which no further starts can be made.

A thrilling, fitting finale is on the cards and a huge spectator crowd is anticipated. Ranger are only two points behind Hanuman and the 'newcomers' Topaz and Svea are only one and two points respectively off the podium. As Lionheart's Mottl succinctly summarises, it is 'all on'.