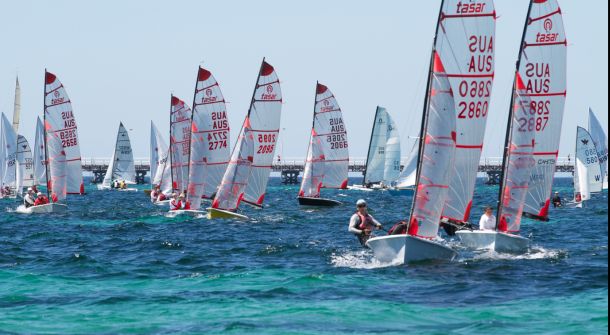 Thursday 8th January of the Tasar 2015 World Championships was scheduled to have two races during the afternoon, but only one race was completed due to a combination of unsuitable weather conditions and a shark sighting in the vicinity of the start line area.

As forecast, offshore southerly winds continued to build throughout the first race, with combinations of lulls and shifty sudden large gusts, similar to the previous afternoon. The skilful sailors were able to master the conditions to form a close group of at least six boats towards the first mark and continued to fight for a place around the course.

There were some great rides on the reaches in the strong winds, and the down wind leg was challenging with the sudden gusty shifts. Once again the strong winds caused lots of capsizes and some damaged boats in the 122 boat fleet.

The combined presentations and a variety of awards of the “Ronstan Half Hour” for Tuesday’s and today’s races was again well received by the enthusiastic big crowd.  The best bruise category had some interesting examples of how to hurt yourself in the confines of the Tasar.

Friday 9 January is scheduled for the remaining races in the ten race series, with final results and presentation of trophies in the evening at Geographe Bay Yacht Club.