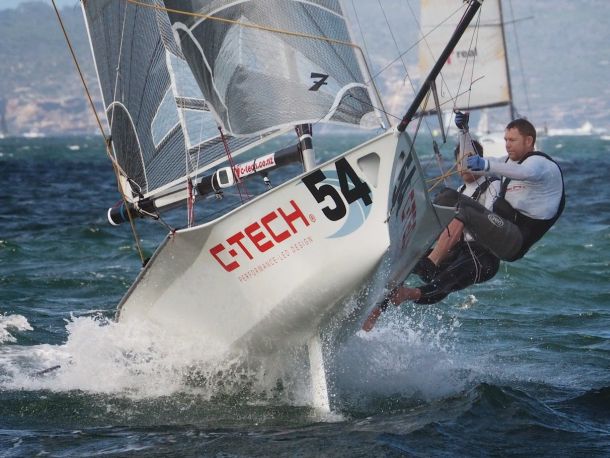 With one race remaining, a bullet and a second place this afternoon have given the Sydney Sailmakers crew of Nick Press/Andrew Stevenson an almost unassailable lead in the 12ft Skiff Interdominion being held on Sydney Harbour.

Despite most skiffs carrying their No. 2 rigs, within a few minutes, three had capsized, including Cunning Stunts (Lachie Paramor/Scott Hobson), which had a broken rudder box. Soon after, defending champion Alex Vailings/Fraser Brown, (C-Tech, NZL) also succumbed. Suffering rig damage, they were forced to return to shore, killing their chances of winning the title back.

Many of the 28 skiffs fell like flies as the breeze pressured up and the Harbour became a little lumpy. At Nielson Park for the first time, Sydney Sailmakers was around first, their white kite set for the run to Shark and Clark Islands. Little Bus and Geotherm were hot on the trail as the trio put distance between them and the rest of the fleet.

By the second run, Geotherm had overtaken Sydney Sailmakers and Little Bus was trailing. However, when Geotherm threw in a couple of gybes, they failed to keep the quick Sydney Sailmakers at bay, the latter taking the win 200 metres from the finish.

“We botched it down the last run. We gybed twice, and didn’t do a good job of it, and they (Sydney Sailmakers) kept straight lining it,” Hobson conceded after the finish.

By Race 9, the breeze had swung further left and freshened to 20 plus knots on a bumpy sea, especially down the Vaucluse end. C-Tech returned to the course with a No. 3 rig, perfect for the conditions. Most, who had chosen their No. 2 rig, were finding their skiffs hard to harness in the stiffer breeze.

The top three started in close proximity again, and the race nearly became the classic ‘Last Man Standing’, as most capsized at least once.  Even the faultless Sydney Sailmakers was not immune, following Little Bus into the water under kite soon after rounding Nielsen Park.

C-Tech alone was revelling in the conditions, leaving the carnage behind. Airborne with every bump, Vailings/Brown stayed cool until around 600 metres from the finish, when they too capsized. With Sydney Sailmakers making up ground, all looked lost for the Kiwis, but Vailings and Brown re-floated quickly and crossed the finish just before the Australians.

“Finally,” said C-Tech’s Fraser Brown. “We finally got the strong conditions we love,” he said with a big smile.

Little Bus finished 10th after a couple of swims, allowing Geotherm back into the picture. One point separates the two, which are second and third placed going into tomorrow’s last race, which will decide their fate.

“It was a little bit hectic,” Nick Press said ashore. “Twenty knots on a bumpy sea; we had heaps on in the bear-aways, but it was great once we got going downhill.”

Dropping second and third races from their scorecard, Press said: “I think we have it stitched up – barring any incidents. The other guys have had challenges which we fortunately didn’t. I thought we might win the last race, but Ging (Vailings) got up. He had his No. 3 rig; the No. 2 was a bit of a handful.”

Brett Hobson agreed that Race 9 was hectic. “But we like it like that,” he said. On the rest of the race and all it entailed: “Everything happened at once. The kite sheet wrapped around the rudder pin, we had land on one side and cruisers on the other – nowhere to go – and then we capsized. We’re a bit disappointed in our day. The goal always is to win.”

Hosted by the 18 Footers League at Double Bay, with assistance from Double Bay Sailing Club, the 12ft skiff Interdominion finishes with one long race tomorrow starting from 3.00pm.

Trash Map: A way to clean our oceans together