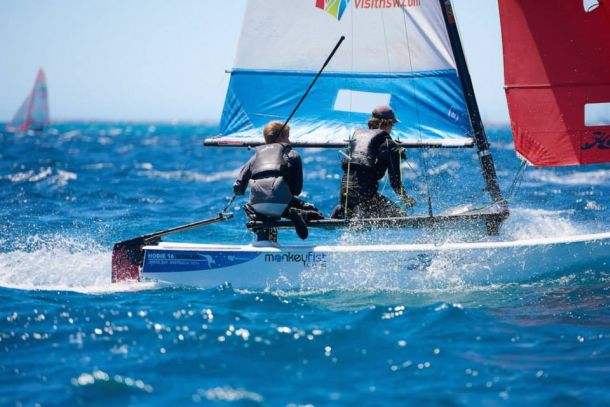 The second day of the Australian Youth Championships saw the completion of three races across the fleets bringing the total numbers of races to five. Another five races are scheduled for the final two days on Friday and Saturday (9-10 January 2015).

The day saw a tricky and unpredictable, light to moderate shore breeze with difficult to read breeze patterns, which kept both athletes and coaches on their toes. The racing was tight and exciting and saw some changes in the leader positions across the fleets.

Queenslanders Kyle O'Connell and Tommy Siganto snatched the lead in the 29er fleet from 2014 World Champion Kurt Hansen and new crew 2014 Australian Sailing Youth Team’s Jim Colley’s (NSW) after winning all three races of the day. The New South Welshmen and recent national champions, who had two bullets yesterday, had an average day posting a seventh (drop), fourth and third, putting them into overall second.

“It was pretty patchy out there with lots of light spots, but we linked it up alright and finished pretty well with our results.” skipper Kyle O’Connell described today’s conditions. While they pair is in the lead at the half way mark of the regatta, he reckons there will still be tight racing ahead:

“It was really close with them (Hansen/Colley) at Nationals and we’ve pulled ahead of them now a little bit, but it’s still pretty close and it will be a tough regatta. We hope to come out on top though and secure this event on our way to hopefully qualify for the Youth Worlds later this year.”

Also the 420 fleet saw some movements on the scoreboard with Alec Brodie and Xavier Winston-Smith (NSW) taking over the lead ahead of Victorians James Grogan and Nicholas Sharman in second.

In overall third are WA’s 2014 Australian Youth Team members and recent 420 National Female champions Nia Jerwood and Lisa Smith. The pair once again outsailed their male competitors in the mixed fleet in the first race of the day, before posting a seventh and ninth (drop) in race four and five. The pair already had a great start to their Youth Nationals campaign yesterday when they also won the first race of the day.

2014 Australian Sailing Youth Team’s Jock Calvert (TAS) is on his way to a third Australian Youth Champion title after winning all five races in the Bic Techno 293 class so far. Queenslander Emma Baillie is the top ranked female windsurfer and ranked second overall ahead of Jock’s brother Angus Calvert (TAS).

Local Zac Littlewood moved into the lead of the Laser 4.7 fleet after the first five races, with national champ Brodie Riley fourth. Between these two are Jordan Makin (NSW) and Caelin Winchcombe. WA’s Zoe Thomson shot straight to the top of the female category yesterday and remains fifth overall after winning today’s first race.

In the Laser Radials the battle between locals Conor Nicholas and national champion and 2014 Australian Sailing Youth Team member Alistair Young continues, with Young taking over the lead from his Fremantle Sailing Club mate Connor Nicholas on day two.

Nicholas, who finished third at the nationals in Mandurah last week, threw down the gauntlet to Young by winning both opening races yesterday and winning today’s first race before posting a 13th (drop) and seventh. Alistair Young finished second, first and fifth (drop) in today’s three races, securing him the overall lead.

In the Hobie 16 2014 Australian Sailing Youth Team member Shaun Connor was able to maintain the lead with crew Sophie Renouf (NSW) and with Lachlan and Ethan White following in second.

Racing is scheduled to resume at 12 p.m. tomorrow, Friday, 9 January 2015 with another three races scheduled for the penultimate day of the regatta.