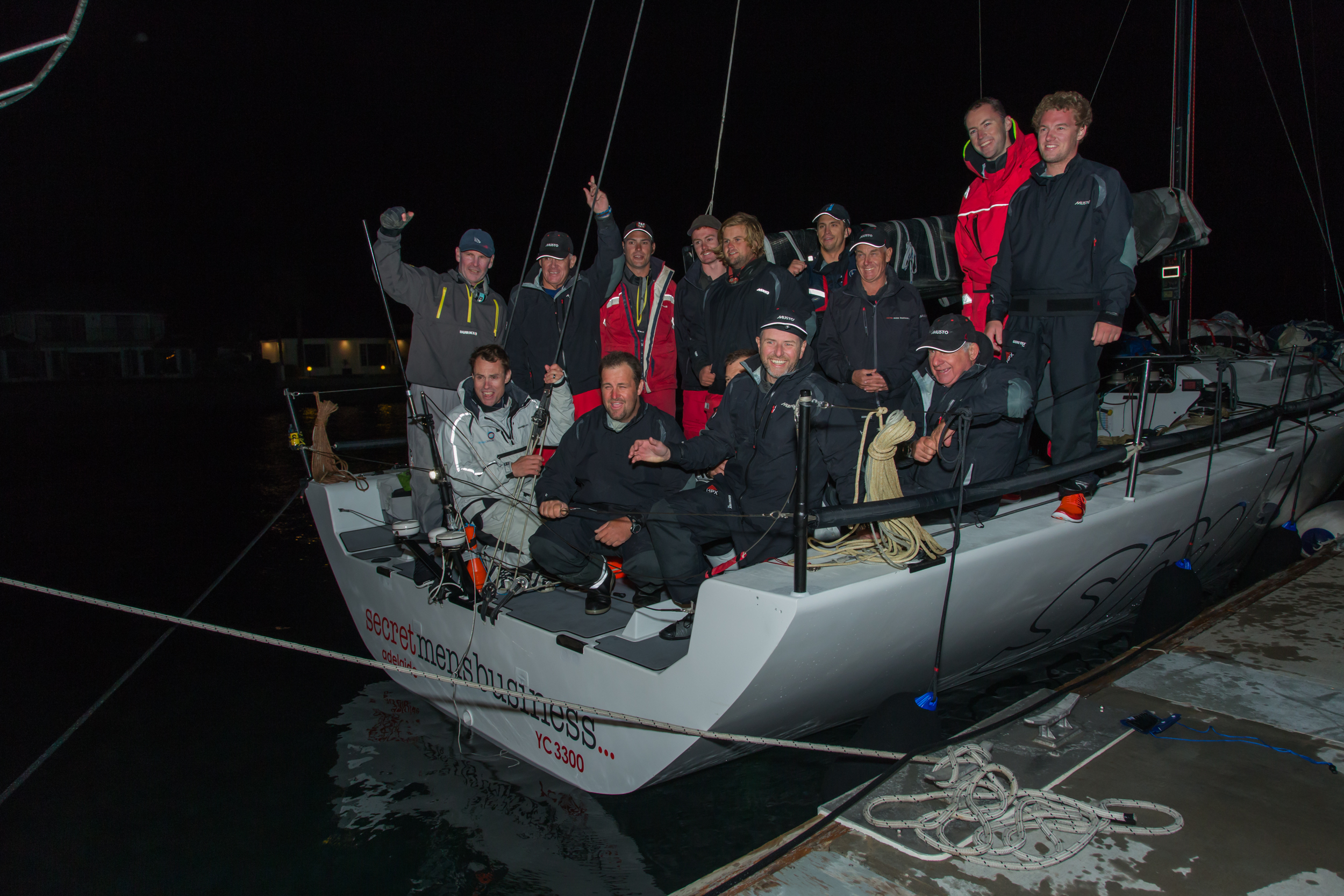 Secret Men's Business at the finish of the Adelaide to Port Lincoln Race. Photo Take 2 Photography.

After more than half a day at sea, Adelaide-based 52-foot yacht Secret Men's Business fell short of a record pace to Port Lincoln by just a matter of minutes.

Starting the Club Marine/Lexus Adelaide to Port Lincoln Yacht Race in strong south to southeasterly breezes, skipper Geoff Boettcher and his team had the record of 12 hours, 3 minutes and 17 seconds, set by Victorian yacht Scarlet Runner in 2011, firmly in sight.

Secret Men's Business navigator Steve Kemp said the wind went further square downwind towards the end of the race, slowing their boat speed and perhaps costing them the few crucial minutes they needed.

“We got down to Cape Spencer and then had a pretty well square run up to Dangerous Reef which slowed the progress down,” Kemp said.

“We had the pedal to the metal and we knew it was only going to be minutes in it but we couldn't quite get there in the end.

“But still, records are made to be broken so next year we'll go again.”

Closely following Secret Men's Business was Jason Ward's 45-foot Concubine, which finished 1 hour and 2 minutes behind, but only about seven minutes behind on corrected IRC time.

Concubine navigator Jason Clark said they were able to hold on to the slightly bigger and faster race leader while the breeze was on the nose off the start line, but as the race turned in to more of a downwind battle, it became harder to keep in touch.

“I think we sailed the boat relatively well but unfortunately the majority of it was downhill and SMB sailed too well for us this race,” Clark said.

“We knew once we got over towards the foot of Yorke Peninsula that SMB were going to be hard to beat because from that point on the race was going to be off the breeze and mostly downwind which is exactly what the boat's quickest conditions are.

“We focused on trying to hang on to them across there and I think we were inside 10 minutes at Marion Reef.”

The race was one of the fastest in recent years with many of the tail enders finishing close together at about lunch time on Saturday.

Secret Men's Business looks likely to clinch the IRC handicap honours as well with official resulted being announced at the race presentation at the Port Lincoln Yacht Club on Sunday afternoon.