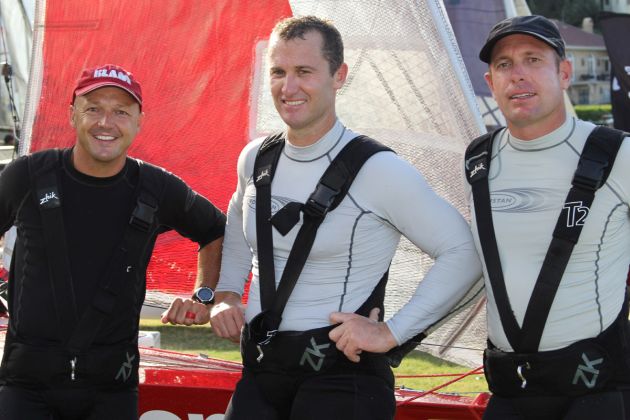 Today’s race began in a 7 knot Easterly breeze with interest centered on the battle between Smeg and appliancesonline.com.au, the only two teams possible of becoming the champions. Appliancesonline is a noted heavy weather team and the day’s conditions were heavily in favour of the Smeg team, which had a handy discard up the sleeve for the tricky wind.

From the outset Yamaha’s boat speed was unmatched by the opposition and the team’s crew work was faultless as it approached the first windward mark in Rose Bay. With a 35s lead over Alcatel One Touch (Stephen Quigley), and a one minute break over third placed Thurlow Fisher Lawyers, Yamaha was in a commanding position as the fleet made its way to the wing mark off Clarke Island. Gotta Love It 7 had been in fourth place at the windward mark but lost all hope when forced to sail up into the lee of Shark Island. Triple M (John Sweeny) and Asko Appliances were next followed by the bulk of the fleet.

In a light, unpredictable wind over the lengthy course, the leading group maintained the advantage with Yamaha taking line honours by 1m21s from Peroni, with Thurlow Fisher Lawyers, just 2s back in third place. Alcatel One Touch finished fourth, with Triple M fifth and Asko Appliances (Marcus Ashley-Jones) in sixth place. Compassmarkets.com (Keagan York) came from well back early to finish seventh.

Next Sunday the Australian 18 Footers League will continue its club racing program when it stages the annual Queen of the Harbour Race.

In this race each skiff carries an additional crew, who must be a female.  It’s always a great race, as well as a lot of fun for the ladies.