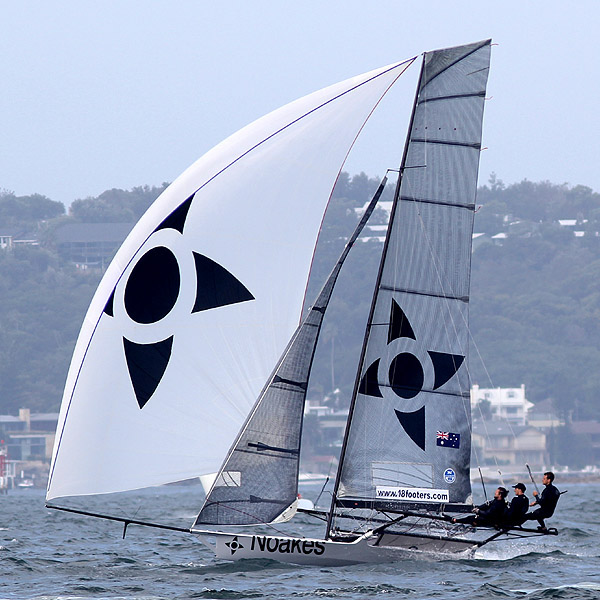 Stephen Quigley and Trevor Barnabas are two JJ Giltinan 18ft Skiff champions who were not only successful on the water, but have been instrumental off the water with various improvements to the ongoing design and technology development of the 18s.

Other ‘off the water’ activities of the pair which are also responsible for the ongoing strength of 18ft Skiff Racing haven’t always been related to the hull or rigging development of the skiffs.

At the present JJ Giltinan Championship on Sydney Harbour, Stephen and Trevor have sons competing in the highly competitive 30-boat international fleet.

Thomas Quigley is teamed with dad Stephen and Sam Ellis on Alcatel One Touch, while Trent Barnabas is teamed with Michael Coxon and Dave O’Connor on Thurlow Fisher Lawyers.

The two young men are both very accomplished sailors in their own right, which is obviously not surprising.

The genes would naturally suggest it is almost automatic that both would follow in their fathers’ footsteps, particularly as they were ‘hooked’ on the 18s from a very early age (see the photos).

As well as Thomas and Trent, the fleet has a number of other sons of former champion 18ft Skiff fathers.

John Winning and Graham Catley are both champion 18 Footer sailors, who are also two leading administrators of the sport in Australia and New Zealand, respectively.

Both are competing in this championship, John on Yandoo and Graham on Maersk Line, and have sons, John Winning Jr. and Nick Catley, teamed together with Seve Jarvin on Gotta Love It 7.

Add young Ash Rooklyn and Daniel Nixon, both on Noakes Youth, and Peter Langman on Noakesailing, to the list, and the future of 18ft Skiff Racing in Australia is assured.

As well as the local father and son combinations, the UK team also has Graham Bridle (father) and Eddie Bridle (son) sailing together on Chameleon Recruitment Software.