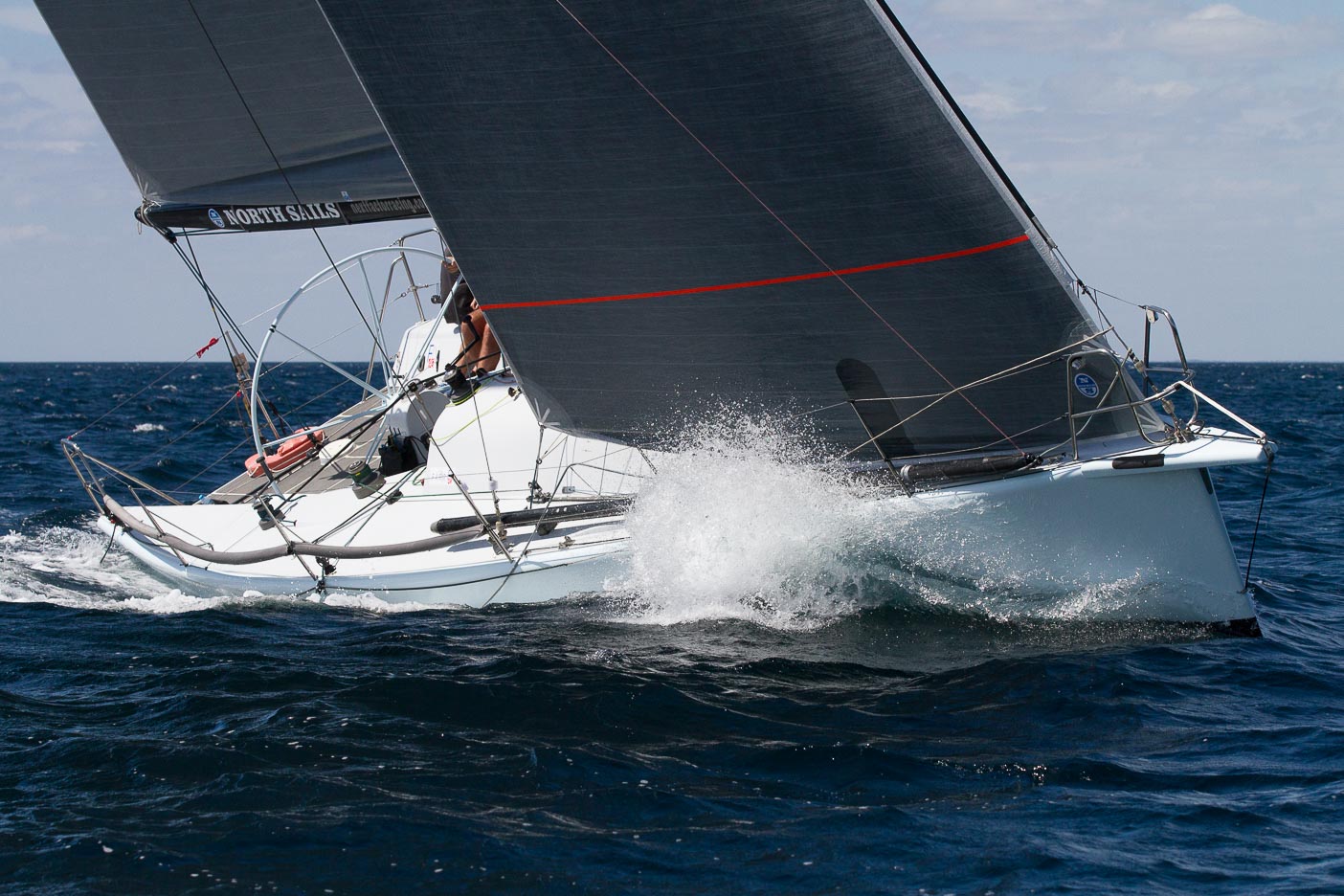 The Next Factor won Division 1 IRC after a strong finish by Black Betty. Photo Bernie Kaaks.

The entry list read like a bride’s wedding wear: something old (Wilson), something new (Napea), something borrowed (Plan B) and something blue (Bird on a Wire). The Club Marine Geographe Bay Race Week included the usual variety of craft in a mix of divisions that ensured good competition all round.

For the second successive year, IRC owners voted with their feet.  Having agitated some years ago for a pure IRC division, it seems now to be too hard and the two IRC divisions yielded a disappointing nine boats between them.  All other divisions were well represented, with most yachts coming not from ocean racing fleets, but from club racing fleets around the State.

The Iberia Race, Royal Perth Yacht Club’s feeder for Race Week, attracted a modest field, but half of them sailed through the finish line in Busselton and straight back to Fremantle. No doubt there will be plenty of soul searching to try to re-jig the formula to get numbers back over the 100 mark, as they were several years ago.

Having said that, the buzz around the Port Geographe Marina, headquarters for Race Week, was all positive, with the vast majority enthusiastically supportive.

Competition was tough.  Even in the five-strong division 2 IRC fleet, boats were so evenly matched that all had their chances at various times and on the penultimate race day, there were two protests. Despite a disqualification on the way, Laurie Flynne’s Dynamic won the series with a score of 13 with another win on the last day. Dynamic finished five points clear of another Beneteau34.7, Peter Burtenshaw’s Mind’s Eye.  This was Burtenshaw’s first attempt at a big boat regatta (he hails from Flying Fifteen territory) and he was on the pace from day one.

David Walling put Peter Ahern on the helm of his Farr40 The Next Factor. The comparison between the duo of Farr40’s and GP42’s in different weather conditions was very interesting, with the smaller boats holding their own in lighter breezes and in the end, The Next Factor won the IRC Division 1 series with a score of 12, two points clear of Garry McNally’s GP42 Black Betty, which loved the stronger conditions on the last two days.

A strong fleet of cruiser/racers contested division 3 and all victors were from regional clubs.  Busselton’s Doug Lawler won the division 3 points score with 16, two points ahead of clubmate Barry Brown in Electric Tram, with the Albany yacht Easy Tiger sailed by Michael Cameron in third place on 20 points. Brown’s finish for the regatta included a tow into the marina by the Busselton Sea Rescue unit following the failure of the yacht’s engine after finishing.

Leonie, in her first full season for new owner Ken Walker, won the Jib and Main division, two points ahead of Gary Griffiths’ Heaven Can Wait.

After yesterday’s fresh breeze a lighter day was expected to finish the regatta but instead, south to south easterlies swept across the Bay at 20 to 25 knots throughout. Royal Perth Yacht Club Commodore Mike Campbell fell foul of the starter and was recalled, while Aiida broke a forestay just before the start and limped back to port.  Her headsail saved the mast.  The all-girl crew on Bird on a Wire also retired before the start when the main halyard parted.

The much vaunted “Spirit of the Regatta” trophy was awarded to Phil Somerville and Dennis Stanley. When Somerville’s S&S34 Huckleberry was damaged in the Iberia Race, he hunted up his mate Dennis Stanley, who owns a Court 750 trailer sailer. They dragged the yacht to Busselton during the first race and competed daily thereafter.  Although totally outclassed, they battled on gamely and were a hugely popular choice. The crew includes blind sailing champion Ryan Honschooten, who ticked another item off his bucket list by sailing in the Sydney to Hobart classic last December.

So the curtain falls on another Geographe Bay Race Week. Wind conditionsearly in the week made it tough for race officers and both PRO Trevor Milton and windward/leeward RO Robin Olsen deserve high praise for their professionalism. And the competitors? Most will head home saying: “We had a ball.”