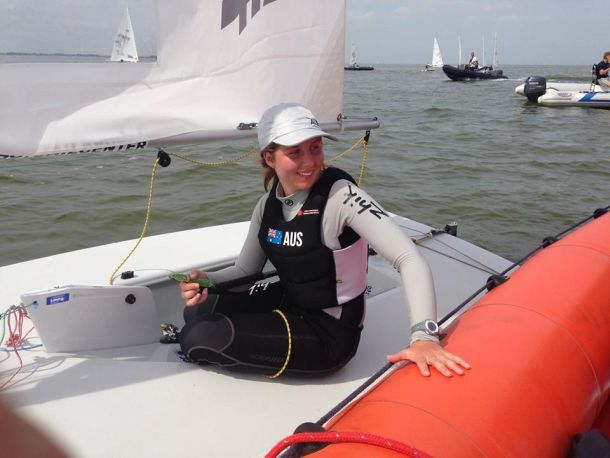 Australian teenage sailor Zoe Thomson has won her second race in the girls’ division of the International Laser 4.7 world youth championships being sailed off Medemblik in The Netherlands and is in eighth overall in standings.

With a 11th place and a win on day four of the regatta, Zoe has lifted from 13th to eighth overall going into Gold fleet racings and, apart from the overall leader from the Ukraine, she is the only girl to have won two races in the seven qualifying races.

Her results were by the best of any of the Australian team with West Australian Caelin Winchcombe slipping from fifth to 16th in the boy’s Gold fleet standings with a 37-44 result overnight.

Also making the Gold fleet of 64 were Zac Littlewood who placed 26-22 on day four to be 27th overall and sixth in the under 16 age group, and Sam King who is 60th after a frustrating day of 39-41 placings. Europeans continue to dominate the overall placings with only five points between the top five boys, comprising two from Spain, two from Turkey and an Italian sailor.

After seven qualifying races in divided fleets for the 260 entrants in the boy’s championship, the fleet has been divided on performances into Gold, Silver, Bronze and Emerald, each with about 65 boats. Ethan McAullay is 25th overall in the Silver fleet while Rosh Ragg had a good day, placing 16th and 5th to be fifth overall in the Emerald fleet.

Hobart yachtsman Roger King and father of Tasmanian champion Sam King, has criticised Yachting Australia for “ignoring” junior and youth sailing as a pathway to future success in international sailing.

“There are many teams here with national coaches that have been team training together for lengthy periods of time and are raising the standard of these events,” Roger King said today.

“These teams are likely to get a jump on Australia that may become unbridgeable until Yachting Australia takes notice of what is happening elsewhere,” he commented.

King, who races an SB20 one-design sportsboat on the Derwent, added: “Tasmania desperately needs a high performance coach to take the talented sailors (and raising the rest with the tide) to their full potential.”

Commenting on the sailing, Roger King admitted that the Australians were up against “some seriously capable” sailors and in the light winds had been outsailed downwind. “Tomorrow is promising strengthening easterly winds off the land and the Tassie boys (Sam King and Josh Ragg) will race as if there were on the Derwent.”