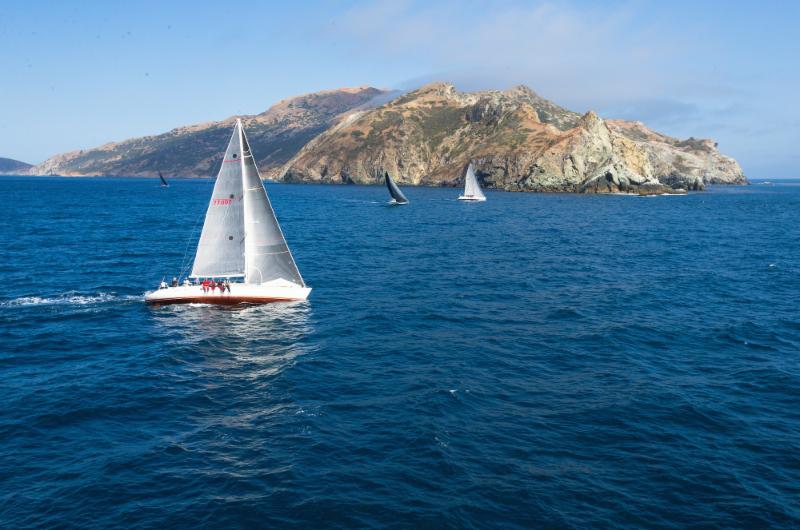 LOS ANGELES, CA – The second wave of three starts to the 49th edition of the 2017 biennial Transpac Race left Pt Fermin today in a pleasant 8-10 knot Southern California seabreeze, en route to a finish line awaiting them 2225 miles away at Diamond Head in Honolulu. The group of 16 boats in Divisions 3 and 4 were today faster and more lively than the cruiser/racers crossing the line on Monday's first start, with plenty of action and even one boat over the start line at the gun.

With a slight pin end favor to the line set perpendicular to the course, John Schulze's SC 50 Horizon timed it perfectly to win the pin with speed and jump out to an early lead. Horizon is one of the perennial favorites among the competitive Fast 50's in this race, having earned herself top prize in this class except for last year when Eric Grey's Allure beat her by less than 3 minutes after nearly a week of racing.

Steve Sellinger's SC 52 Triumph set up early on the line, luffing her headsail to modulate her speed, but got caught when the fleet converged and kept her above the line at the gun. So PRO Tom Trujillo and his team raised the X flag and called her back, a small hiccup for a race lasting several days ahead.

Another early leader in the pack was Naomichi Ando's R/P 45 Lady Kanon VI, powered up, heeled over and going fast even in the light breeze.

The next generation of Transpac racers was well-represented in the fleet this year, with numerous young sailors on board boats headed west.

For example, today Chris Hemans's Rogers 46 Varuna had his daughter Gray Hemans on board, listed as Spinnaker Trimmer on their crew list, and on Monday's start Ross Pearlman's Between the Sheets had Rob Vandervort's son Will Vandervort also on board. Both Gray and Bill are active 14 year olds in the junior sailing scene in Newport Beach.

“We're really fortunate to have strong interest from our members in passing on their love of this race and offshore sailing to young sailors,” says TPYC Commodore Bo Wheeler. “I expect to see a lot of interest this in the next cycle for the 50th anniversary edition in 2019.”

The remaining 22 fast monohulls and multihulls in Divisions 0, 1 and 2 are having their last night ashore tonight before its their turn to start tomorrow, July 6th at 1:00 PM, also at Point Fermin. Among these are potential race record-breaking entries in both the monohull and multihull divisions, so follow them on the Transpac YB tracking page at https://yb.tl/transpac2017#.