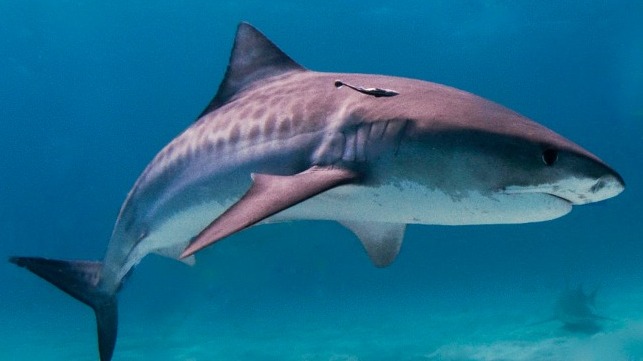 If you have a toddler, or if you encountered one in the last year, you’ve almost certainly experienced the “Baby Shark” song. Somehow, every kid seems to know this song, but scientists actually know very little about where and when sharks give birth. The origins of these famous baby sharks are still largely a mystery.

Many of the large iconic shark species – like great whites, hammerheads, blue sharks and tiger sharks – cross hundreds or thousands of miles of ocean every year. Because they’re so wide-ranging, much of sharks’ lives, including their reproductive habits, remains a secret. Scientists have struggled to figure out precisely where and how often sharks mate, the length of their gestation, and many aspects of the birthing process.

I am a Ph.D. student studying shark ecology and reproduction and am on a team of researchers hoping to answer two important questions: Where and when do sharks give birth?

In need of innovation

Until very recently, the technology to answer these questions did not exist. But marine biologist James Sulikowski, a professor at Arizona State University and my research mentor, changed that. He developed a new satellite tag called the Birth-Tag with the help of the technology company Lotek Wireless. (He has no stake in the company.) Using this new satellite tag, our team is working to uncover where and when tiger sharks give birth and is demonstrating a proof of concept for how scientists can do the same for other large shark species.

The Birth-Tag is a small, egg-shaped device that we insert into the uterus of a pregnant shark where it will remain dormant and hidden among the fetal sharks throughout pregnancy. This kind of tag has never before been used on sharks, but similar implanted tags have been used to figure out the birthing locations of terrestrial mammals, such as deer, for decades with great success. When a tagged mother shark gives birth, the tag will be expelled alongside the babies and float to the sea surface. Once it senses dry air, the tag transmits its location to a passing satellite, which then sends that location and time of transmission back to our lab. As soon as we download this information, we know where and when that shark gave birth.

After years of fine-tuning this new technology, we launched the first phase of the study in December of 2019 and began deploying the tags. Once the study was approved by the Institutional Animal Care and Use Committees at both Arizona State University and the University of Miami, as well as the Bahamian government, we set out to find some tiger sharks. To do this, our team of researchers from the Sulikowski Shark and Fish Conservation Lab and the Shark Research and Conservation Program at the University of Miami led by marine biologist Neil Hammerschlag, traveled to the crystal-clear waters of Tiger Beach off Grand Bahama Island to tag tiger sharks.