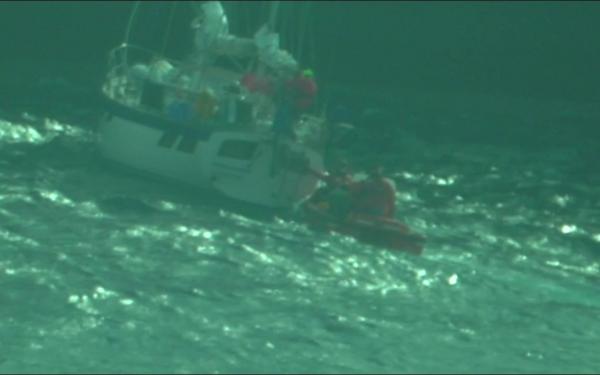 Watchstanders at the Fifth Coast Guard District command center received the initial call from the Rescue Coordination Center United Kingdom on Wednesday at 7:43 a.m., who reported that a 39-foot sailboat had become disabled due to a non-functional steering box with two persons aboard.

The Fifth District command center activated the AMVER System to alert vessels in the area to the emergent situation and request assistance from them. The motor vessel Torm Laura answered the call and diverted to the disabled sailing vessel on Thursday, but was unable to enact a rescue due to the heavy seas, and eventually departed from the scene.

The vessel was left adrift with navigation lights on and the Automatic Identification System activated so the vessel will be able to be tracked for any future recovery operations.

“When a mariner is experiencing an emergency far offshore, it can be unrealistic to get a Coast Guard asset to the scene quickly,” said Lt. Daniel Dunn, command duty officer at the Fifth Coast Guard District command center. “The AMVER System allows us to coordinate a rescue utilizing nearby vessels willing to help.”