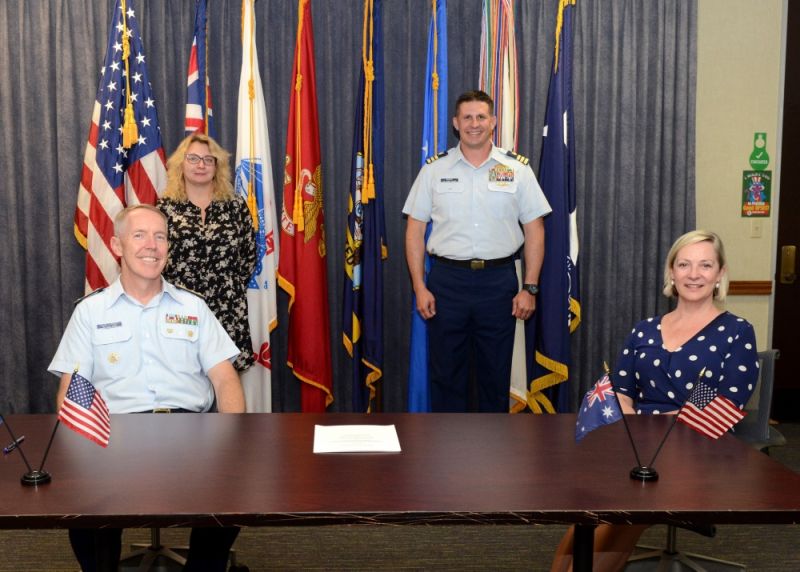 HONOLULU — The United States Coast Guard and the Australian Department of Home Affairs signed a memorandum of agreement for a system of mutual officer exchange from their offices in Hawaii and Canberra, Monday.

“The memorandum of agreement solidifies an already incredible relationship with our Australian partners in the Blue Pacific region,” said Cmdr. Jason Brand, chief of enforcement, Coast Guard 14th District. “The agreement enhances the interoperability between the U.S. Coast Guard and Australian Department of Home Affairs by creating a personnel exchange system designed to share experience, professional knowledge, and doctrine between the partners. This exchange is another tool for our work to promote and further a free and open Indo-Pacific.”

Upon signing the agreement, Rear Adm. Lunday commented, “The U.S. and Australian alliance is built on over a century of mateship. This agreement reflects the importance of our combined operations to maritime governance and security across Oceania, especially as the U.S. Coast Guard is expanding its permanent presence and operations in the Pacific.”

In attendance was Ambassador Jane Hardy, the Australian consul-general in Honolulu, who said of the agreement “this significant bilateral initiative will develop further our mutual efforts to maintain and enhance regional security.  The skill and bravery of our U.S. Coast Guard ‘mates’ and Australian Border Force exemplify the heart of the Australia-US Alliance.”

Australian and Coast Guard personnel often find themselves working alongside one another during joint missions throughout the Pacific from search and rescue cases to the prevention of illegal, unreported, and unregulated fishing (IUU).

Examples of such efforts include the work of Royal Australian navy HMAS Toowoomba (FFH 156) and a Coast Guard Station Honolulu 45-foot Response Boat-Medium crews to respond to a de-masted sailboat off Hawaii in 2018 and joint exercises between the HMAS Choules (L100) and the Coast Guard Cutter Walnut (WLB 205) in the South Pacific during Operation Aiga 2019.

Scheduled later this year, the partners will reach a new milestone when the Coast Guard sends a surface asset for the first time to serve alongside Australia's during P-QUAD's Operation Nasse.

“We plan to send crews aboard Coast Guard Cutter Kimball (WMSL 256) and an Air Station Barbers Point HC-130 Hercules airplane to support the P-QUAD operation for the first time,” said Brand. “The U.S. and Australia have been standing side-by-side for more than 100 years. This is more than a partnership, it is mateship. As we increase operations with our Australian counterparts, this new personnel exchange allows us to take the next step to integrate further for more fruitful outcomes maximizing the value of the experience and resources of our nations.”