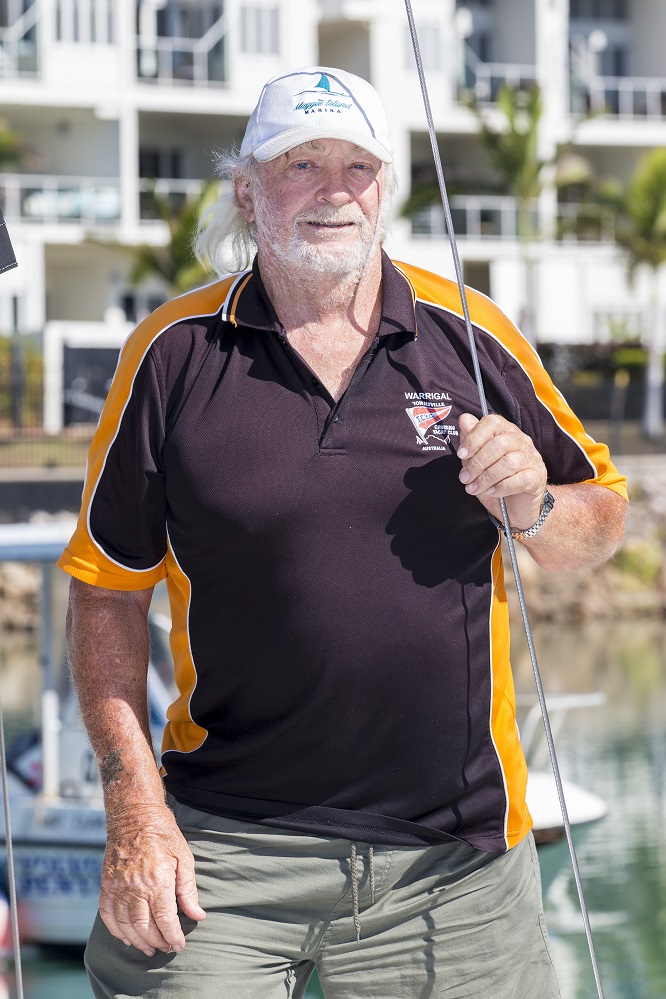 Jim Finch is a Townsville local of some 50 years, arriving in Townsville for a holiday and never returning home – he has also attended all 11 SeaLink Magnetic Island Race Week’s with Warrigal – the Finch 40 he conceived, designed and built.

“I’m still on holiday,” says Finch laughing. “I come from Albury-Wodonga originally and leaned to sail there on the Hume Weir – so I’m very good in light weather and at dodging trees,” he remembers of his time sailing a Corsair there.

But it is his bright orange yacht Warrigal that causes most interest, not in the least because of its colour. When the 73 year-old built it 27 years ago, yachts were predominantly white. “It was like a bomb going off when people saw her,” he says laughing.

“The concept for the boat came from three other boats. I built of her high-tensile steel and called her Warrigal (Dingo) cos she’s a Heinz variety,” says the former owner of JNS Motors, a panel beating and engineering shop in Townsville where the yacht was designed.

“It had to fit in the shed I had, therefore it’s 40 feet,” he recalls. “She’s strong and goes well in light air. I designed her for the Coral Sea Classic, but we never got around to doing it.”

However, Warrigal has raced with distinction locally. She was Townsville Yacht Club champion twice – in the late eighties and nineties.

“I’ve been a member there 50 years, on the Board for four years and was Vice Commodore once,” Finch says of the club which organises hosts SeaLink Magnetic Island Race Week. “I believe I saw the club through some very productive years and helped pre-form it into what it is today.”

Warrigal also won the Ansett Challenge at Hamilton Island a long, long time ago. Here at Magnetic Island where she is racing in PHS Division 2, Warrigal and her crew of Finch, Alan and Michelle Glanville, Peter Minogue and Peter ‘Kiwi’ King, scored their best result on Monday’s light air, finishing sixth in a hot fleet.

When Finch says he’s done all 11 Magnetic Island Race Weeks, he means almost. In 2008 he recalls: “We were in the middle of racing and I couldn’t work out which side of the line I should be on. I knew there was something wrong, I remember it distinctly.

“The chest pains got worse and the manager at Peppers got the medical people here. Once they stabilised me, I went out in style on a helicopter, leaving Magnetic Island behind. I was in the process of having a heart attack.”

In Intensive Care for 10 days, the upbeat Finch also discovered “I was a screaming Type 2 diabetic – probably all the rums I drank after racing!”

As soon as he could, Finch was back sailing.  He is, as usual, here for the 11th Magnetic Island Race Week, enjoying the racing and camaraderie “and grateful to still be here,” he said.

And on other boats, just when you thought Elvis had left the building, he turned up on Michael Phillips’ Poppy this morning, blue suede shoes and all, but refused to sing a note.

That was not the case on Stanley Barnes’ Librian and Donna Dewhurst’s Soul Sister though. Both crews leave the dock singing and return the same way each day. Naturally, the ladies on Soul Sister start with their namesake song.

All these capers happen well after the beautiful sunrises at Magnetic Island each day.