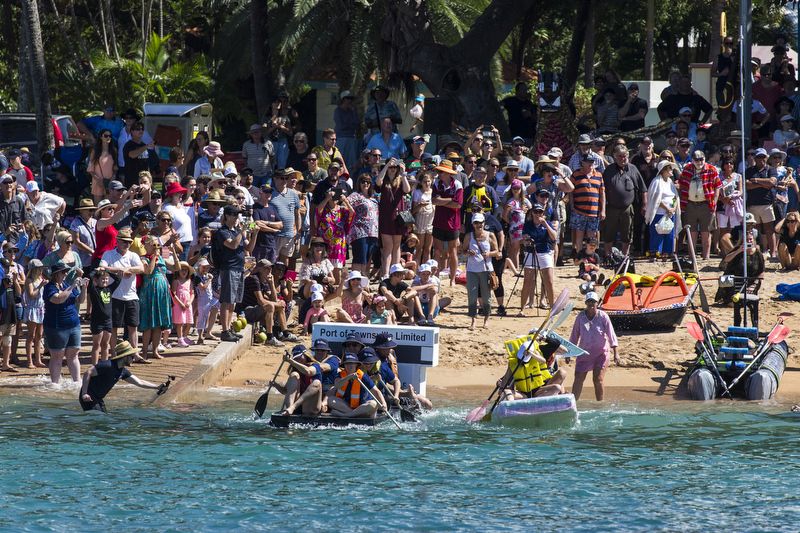 Father’s Day lay day is over and the on-water battles resume today at SeaLink Magnetic Island Race Week (SMIRW) with racing on the bay off Townsville to start from 11am this morning.

Yesterday competitors enjoyed the Rotary Beer Can Regatta, where some of the entries were quite sophisticated, and the mud crab races and other activities, including lunch at the Island’s hot spots to celebrate Father’s Day.

Back to racing, Principal Race Officer Denis Thompson is sending all but Division 1 on a race to White Rock return, while he will set short races for Division 1.

“The wind may be a little lighter than it was the first two days, but we should get away on time and we’re expecting a sea breeze this afternoon,” said Thompson, whose years on the job Australia wide have given him an excellent nose for the weather.

“We planned the races this way so the entire fleet should be heading to the finish under spinnaker,” which means spectators will again enjoy a mass of colour as the fleet heads back to the finish and Magnetic Island on Day 3 of Townsville Yacht Club’s (TYC) unique regatta. “It’s all straightforward and all good sailing,” Thompson ended.

In Division 2, Peter Lowndes’ Wine Dark Sea (NSW) has so far fended off Ian Edwards’ Wings (NSW) and two-time winner here, the wily Sir Robbo Robertson (Qld) and his new Bavaria C45, It’s Time; one point between each. Whether Lowndes can lose the bridesmaid tag this year remains to be seen.

Newcomer to SeaLink Magnetic Island Race Week, John Chipp and his Hot Chipps (Vic) have surprised Division 3 contenders with their early lead. It is rumoured they are being helped by the local seagulls who have been bribed with chips.  The handicapper may have to look into this advantage… John Brand’s Star Ferry (Qld) is five points off the lead, with Eddie Mackevicius Merlion (Vic) a further point in arrears.

The pointscore is tight in the Multihulls. Currently, Ian Johnson’s Salacia leads fellow Townsville YC member, Graeme Etherton and his The Boat and Kevin Lord’s Vivacious (NSW) – just one point between each.