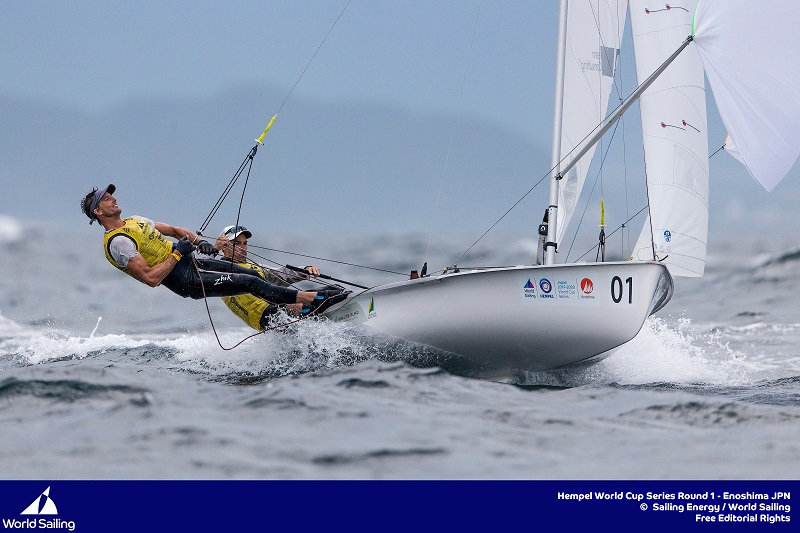 The 49er Gold looked as if it was heading to Germany's Tim Fischer and Fabian Graf but a capsize on the final downwind saw it slip away as James Peters and Fynn Sterritt (GBR) finished second to climb from fifth to first.

Louis Giard (FRA) put a dominant performance together in the Men's RS:X, moving from third to first.

There were no big surprises in the 49erFX and Women's RS:X meanwhile. Annemiek Bekkering and Annette Duetz (NED) and Yunxiu Lu (CHN) Lu had good advantages going into the Medal Race and confirmed their gold medals.

In the Finn, Nicholas Heiner (NED) won Gold with a race to spare and He Chen (CHN) qualified China for the Olympic Games, as the event acted as an Asian Continental qualifier for the class. Pavlos Kontides (CYP) all but confirmed Gold in the Laser. Gold medallists in the three remaining fleets will be decided on Sunday.

Ahead of the Nacra 17 Medal Race, any one of six teams could mathematically take Gold as just eight points separated them.

After a 90 minute delay waiting for the wind to fill in, the Medal Race was full of thrills and spills. The breeze picked up as the race unfolded which resulted in several shifts in momentum.

One constant was Delapierre/Audinet fighting it out with Tita/Banti at the front of the pack. The Italians edged in front during the early part of the race, but the French remained focused and firmly in the hunt.

As their rivals fought in the middle of the pack, it was clear the race for gold was between the French and Italian teams.

The French rounded the final mark just one second ahead of the Italians and it was a straight shootout on the final downwind. The Italians looked to slow the French but with the breeze ranging from 15-20 knots from the south west and a short downwind leg, they simply ran out of time. Delapierre and Audinet crossed the line four seconds ahead and that confirmed their gold medal.

“It was so cool today,” said a vibrant Delapierre, “This is unconventional for us because we've only sailed together for one year. It's a bit strange but a really good feeling.

“This morning we were seven points away from the lead so our focus was on winning the Medal Race and that's what we did. It's a crazy feeling because obviously Rueggero and Caterina were really strong so it was cool.

“Sailing was tough today; lots of waves. It wasn't too windy but it increased. It was hard to push the boat downwind.”

Audinet added, “I'm really happy because we're a new team. It's a nice feeling to win a regatta and good preparation for next year.”

Tita and Banti started the day in fourth and their second place handed them bronze. Overnight leaders Ben Saxton and Nicola Boniface (GBR) finished the Medal Race in fifth which meant they missed out on gold by a single point.

There was also drama in the final downwind in the 49er which ultimately decided the gold medal.

The overnight advantage sat with Fischer and Graf who held a nine point lead. Nestled in the middle of the fleet for most of the race, the Germans were set to win gold but on the final downwind they capsized and dropped to the back of the pack.

Great Britain's Peters and Sterritt focused solely on finishing as high as possible in a bid to claim a medal but their second place quickly became enough for them to move from fifth to first and clinch gold.

“We had a good chance of a medal but gold was completely out of reach in my opinion,” expressed a shocked Peters. “We got an awesome start and kept it upright.

“We were going quick upwind in the wind and waves and all the people that needed to do badly did badly so we went from fifth to first in the Medal Race which is a sick feeling.

“Just the amount of different people that needed to finish in different positions was crazy but it happened. You've just got to believe and keep pushing to the end. In sailing you just never know. We're super happy.”

The British team also claimed gold one year ago in Enoshima and were thrilled to repeat their performance. Sterritt commented, “We really wanted to defend our title from last year.

Going into the Medal Race it didn't look like we were going to do it, even though it was mathematically possible. It takes a lot to pull these kind of things off when there are so many boats involved and stand a chance. The stars aligned and we'll take it.

“Unbelievably happy and this is probably one of the best moments of my sailing career so far.”

Bekkering and Duetz held an eight point lead going into the 49erFX Medal Race and knew a fourth or better would seal the deal. They did what they needed to do and clinched a fourth to win by nine points.

“We were going into the Hempel World Cup Series 49erFX Medal Race with a little bit of a lead,” commented Duetz. “We still needed sail quite well to defend the first place and we managed to do that.

“It will be very nice to have the Olympic Games at this venue. You get a bit of everything. We've really enjoyed it and hope we get a little bit more like this next year.”

Alex Maloney and Molly Meech (NZL) won the Medal Race and overhauled Julie Bossard and Aude Compan (FRA) to pick up silver as the French settled for Bronze.

Giard led from start to finish and as the points were so close, there was not much his rivals could do to stop him and stake their own claim for the regatta victory.

“It was really close with the top four guys,” said Giard, “but I won the Medal Race and won the gold medal. The forecast here can be really windy, like this week. You need to adapt all the time. I like it when it's windy and I really wanted to win this week. This is what I achieved today and I'm happy.

“It's very good for my confidence to win one year before the Olympic Games. It means a lot and now I need to stay on top in the next few months to be here next year.”

Kun Bi remained in silver medal position as he finished second and Le Coq's fifth dropped him to Bronze.

China's Yunxiu Lu has really found her feet on the waters of Sagami Bay in the Women's RS:X. She won Gold at Ready Steady Tokyo, the Olympic Test Event, just over one week ago and was a firm favourite to make it two in a row.

In the Medal Race she fell in the water after misjudging a lay line, which resulted in her dropping to eighth overall. Fortunately she had a enough of a points buffer to claim Gold.

“I am very excited. These last two months I've worked very hard. My team is also working hard as well. I've been fighting and I'm very happy. I thought I would be okay when I fell in the water. I trusted myself and did my best.”

Sunday's action will see Medal Races for the remaining fleets. Gold has been confirmed in the Finn and Laser but there is plenty on the line in the Laser Radial and 470 fleets.

The 470s, Laser, Laser Radial and Finn will conclude racing on Sunday 1 September at 12:00 local time and you can watch at: https://www.youtube.com/watch?v=DwMBD476ybI

For more information and results go to: wcs-enoshima.org