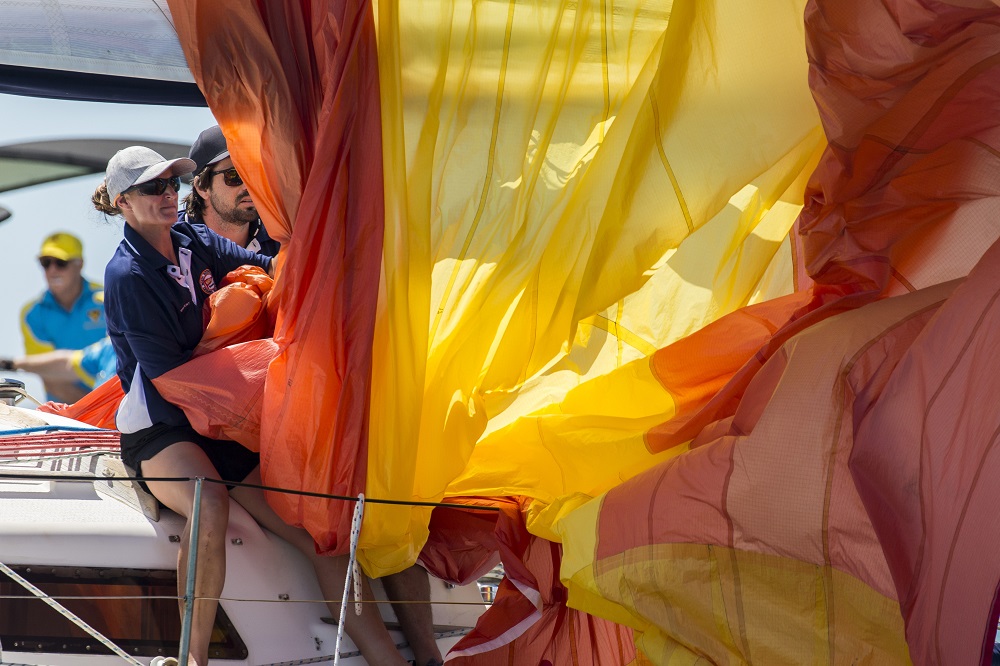 Day 2 started much the same as yesterday, except the light breeze came in on cue; Principal Race Officer, Denis Thompson, able to proceed with racing on time from 11am at SeaLink Magnetic Island Race Week, held off Townsville in Far Northern Queensland.

There was some early argy barby in Division 1, with individual recalls putting manners back in place in Race 2 of Townsville Yacht Club’s (TYC) major annual sailing event. One boat (no names mentioned) was called three times before it finally returned to the start line. Costly.

From there, it was a downwind leg to a mark off the Strand in the Strand race, which took the entire fleet to a mark near the foreshore of Townsville.

Locals and visitors to the region were able to see the boats. Most were carrying spinnakers, making a kaleidoscope of colour. Little zephyrs of breeze filtered through every now and again, but not enough to make any real impact on that leg.

Rounding the mark became a little tricky for those racing together in small packs. Effarrvescent, a North Queensland Farr 11.6 owned by Lyndon Borgas, was caught in a yacht sandwich. She stalled, then started to drift backwards. A quick smooch and a light kiss with one neighbour, and Effarrvescent went merrily on her way again.

Others had close calls. On Brian Yarnall’s Mika (Vic), communication was not up to scratch; her white kite taking a dunking before pairs of hands set to work pulling it in. It’s all in a day’s sailing and gives boaties something to talk about over a drink later. Scotty Hiller and the drone crew catch all the action and show it at the daily prizegivings amid comments and laughter.

A short while after rounding the Strand mark, the breeze filled in nicely as the fleet sailed up the work towards Magnetic Island.

In the hotly contested Division 4, there are competitions within competitions between the 16 entries, for both line and overall honours. Warrigal’s (owned by James Finch – a local) chances were gone when her kite shredded.

It is on every day between the four Farr 1104’s and three are TYC members: Son of a Son (Peter Webster), Vaya Con Dios (Wayne Simonsen) and Akarana (Vicki Hamilton) along with Whitsundays boat, Infarrction (Carol Roberts). Drinks go to the winning Farr each day.

Akarana’s crew as enjoying the spoils today, having beaten the others over the line. ”The drinks are on them,” she said. “Yesterday we did a Steven Bradbury when the others went round the wrong mark.”

This morning, the ladies, plus a token male, dressed in theme as they do each year. This year it was ‘Heaven and Hell’, with fallen angels, goddesses, demons and a devil – complete with black leotard, red horns and a tail. They help make the event what it is.

On It’s Magic, Peter Sarda and his Cavalier 37 crew from Apollo Bay in Victoria are relishing their first SeaLink Magnetic Island Race Week: “Each year we cruise up the east coast and friends said if we were going to do the regatta, this is the one we should do. They were right,” Sarda said. “We’re enjoying ourselves; the friendly people and all the fun. We haven’t been let down so far.”

Sarda said they had “a fantastic day. We had a good sail with a great finish with Unhinged (Vaughn Thompson’s local Hunter Legend design). We chased them down and came within a boat length or so, but just couldn’t quite sail through them. It made our day, though.”

Another local boat in Division 4 is Lynda Sawbridge’s Helena May. Being local, the Bavaria 38 is a regular at this event and it’s one they are happy to support.

“It’s a very good regatta,” Sawbridge commented. “We had just enough breeze (12-14 knots) to get us around the course today. We’ve got a lot of gun boats in our division and the one we like to beat is Celebrity (Wayne McNee’s Swarbrick S111 from RANSA in Sydney).

“They were around half a boat length in front of us at the Cleveland mark today and because we were faster getting our kite up, we beat them home. Yesterday Vaya Con Dios beat us over the line by four seconds. We’re having a great tussle and I’m sure it will continue,” she ended.

Tomorrow is lay day, so racing continues at SeaLink Magnetic Island Race Week on Monday from 11am. The event finishes on 4 September with boats racing across Spinnaker, Non-Spinnaker and Multihull classes.