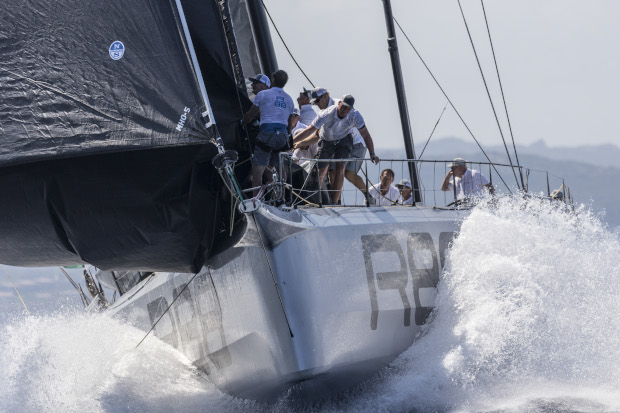 For the 47 competitors, the Maxi Yacht Rolex Cup got off to a superb start today with a northwesterly that built to 20+ knots and a superb beat up the La Maddalena archipelago’s ‘Bomb Alley’. The 30th edition of the most prestigious maxi boat event, organised between the Yacht Club Costa Smeralda and the International Maxi Association, the World Sailing-recognised body that representing maxi boats globally, runs out of Porto Cervo until Saturday 7th September.

There was upset in the Mini Maxi Racer 1 class with neither Sir Peter Ogden’s 77ft Jethou nor Dario Ferrari’s Cannonball nor Hap Fauth’s brand new Bella Mente prevailing, but new kids on the block – Jim Swartz’s Vesper (ex-Momo). A 1-3 in today left Vesper leading, one point ahead of Cannonball with Jethou winning race two.

“We had a very gratifying day,” said a beaming Swartz, who stepped on board for the first time this morning. “It is just a great horse and was set up well today in the conditions. I told the boys before we left that I had zero expectations – ‘go out there, learn the boat and have fun’. Somehow it all came together.”

Tactician Gavin Brady agreed: “It is like when you haven’t played golf for a long time and you have a really good first round, but then the next day reality bites. Today we had two reasonably good, safe conservative starts and then just sailed the boat on its numbers…”

The rest sailed coastal courses, the Wallys and Maxi Racers on the longest at 34.5 miles, up past La Maddalena and around Spargi where they made the most of the sizable swell rolling in through the Strait of Bonifacio. Here George David’s Rambler 88, was surfing down waves at 25+ knot speeds, ultimately winning under IRC despite being highest rated Maxi Racer. “It was nice at the top of the islands with good acceleration,” recounted navigator Jules Salter. “It came down to solid crew work: The sails go up when you need them up. Brad [Butterworth] did a good job of guiding us up Bomb Alley. It was a smooth day.”

Bizarrely, given their breakneck speeds downwind behind the islands, off Capo Ferro, in sight of the finish line, the breeze disappeared, replaced by a light southeasterly. In many classes this transition defined the results.

After the dominance of the smaller boats last year, today it was Sir Lindsay Owen Jones’ Wallycento Magic Carpet Cubed that won the Wally class, from David M Leuschen’s Wallycento Galateia. “We had a nice start, were well prepared because we’d got out there early,” recounted Magic Carpet’s captain, Danny Gallichan. They protected and led up through Bomb Alley but on the return journey Galateia gybed inside only to fall into a light spot whereas Magic Carpet stayed in the breeze, able to lay Monaci. They then slipped through the transition without stopping.

The other classes sailed a similar course, but not rounding Spargi.

The two Js came out on top in the Super Maxi class with Topaz winning from Ronald de Waal’s Velsheda. It was a phenomenal match with the longer, higher rated Topaz doing all she could to fend off her rival. Ultimately Topaz broke her spinnaker end, forcing to her to sail wing-on-wing. This kept them in the game while Velsheda passed, but then Topaz made a better job of the transition. “It was all smart, no luck whatsoever!” quipped Topaz’ helmsman Peter Holmberg. “We have a great stable mate in Velsheda – we love racing them. They are sharp, they’re good, they fast and a great benchmark for us.” Among the Maxi Racer-Cruisers, the Reichel/Pugh 90 All Smoke prevailed over class favourite, Vera.

In the Mini Maxi Racer 2 SuperNikka recovered from a start line touch with Peter Dubens’ Frers 60 Spectre to win the day, despite owner Roberto Lacorte having jetted straight in from the FIA World Endurance Championship in Silverstone. “We sailed well – the boat is fast and the crew work is good,” he said. “It was a perfect Costa Smeralda day with strong wind and flat sea. We touched 21 knots, which is the equivalent of 300km/h at Silverstone!”

One of the star performers was Márton Józsa’s Reichel Pugh 66 Wild Joe which after a few tactical and technical issues up Bomb Alley set off like a scalded cat once her kite was raised. “With the DSS foil and the new A2 spinnaker we were flying downwind,” recounted Wild Joe’s round the world race veteran Stu Bannatyne. “The top speed was 23-24 knots, but the main thing was a very high average. We came right back into the VO65 and ended up getting line honours.”

In the Mini Maxi Racer/Cruiser class Benoît de Froidmont's Wally 60 Wallyño won from Vincenzo Addessi's Mylius 18E35 Fra' Diavolo. De Froidmont, who is President of the International Maxi Association, admitted that their win had come through the transition. “It was a bit of a robbery! We were behind coming into the transition and we could see where to go, so I apologise for winning,” he said, adding: “In our class the level is extremely high. Today was great day with perfect conditions.”

Among the Mini Maxi Cruiser/Racers it was also the lowest rated that won, in this case Tony Ball’s Six Jaguar, a 40-year-old Swan 65 sloop which Ball describes as “having more in common with the J Class than the Swan 651…apart from the running costs.” Victory came despite technical issues such as a jib getting stuck in her headfoil. Bell reckons they won on the penultimate downwind leg: “We were using jibtop and staysail and we were doing 12 knots.”

Tomorrow racing resumes at 1200 with the Mini Maxi Racer Cruiser and Cruiser Racer classes sailing windward-leewards and the rest coastals.