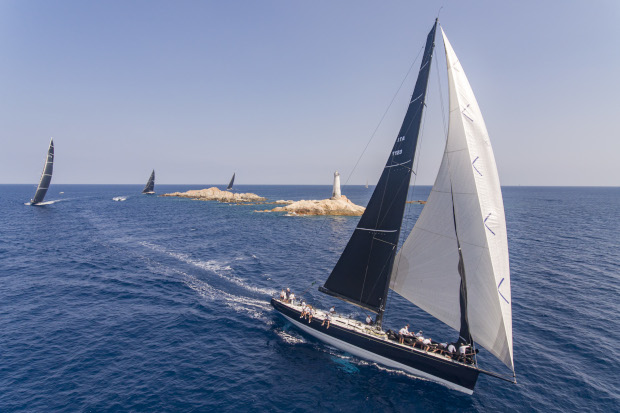 After a brisk Monday, day two of the Maxi Yacht Rolex Cup provided lighter 9-13 knot winds veering from west to north. A coastal course for most ultimately headed south around Isla Mortorio before returning to Porto Cervo.

This year is the 30th edition of the Maxi Yacht Rolex Cup, organised by the Yacht Club Costa Smeralda and the International Maxi Association, the World Sailing-recognised body representing maxi boats globally.

“We are really happy with all the hard work we’ve put in to get here,” said Strasoldo. Their secret weapon is tactician, former America’s Cup helmsman Paolo Cian. “To be honest, we know that the boat itself likes flat water and medium winds,” he said, adding that they started well and it was easier to find lanes on the upwinds, being among the lowest rated.

Cucchiaro acquired his boat (formerly Leonardo Ferragamo’s own Cuordileone) last year and sails with a mainly US crew including navigator Larry Rosenfeld. “It was the quintessential perfect Porto Cervo conditions – a great day,” said Cucchiaro. “We got good starts, sailed clean and it worked out. We didn’t give the competition a chance to pass. Also it was good conditions for the boat – 10-12 knots, which Swan 601s like very much.”

The coastal initially took the boats upwind to Monaci and then into the entrance of Bomb Alley (Golf), before heading south and returning to the finish off Porto Cervo, the Mini Maxi Racers 1, Wally and Maxi Racer classes sailing a marginally longer course.

First away were the Mini Maxi Racers where the eagle-eyed afterguard on Dario Ferrari’s Cannonball were first to spot the sudden strength of the right. “Conditions changed very quickly after our strategy had been to win the left and go left,” explained tactician Ed Baird. Cannonball took transoms to get right where they found favourable shift and extra pressure. “Then it was a question of joining the dots on each leg because there was a significant shifts,” explained Baird. Cannonball now leads Jim Swartz’s Vesper by a point.

Among the Wallys there was a return to form for last year’s winner, Terry Hui’s Wally 78 Lyra. They lost heavily yesterday in the transition which they entered two minutes ahead and exited 50 minutes behind. “It was like a traffic jam!” explained Hui. “Today we had good weather and were lucky the wind picked up a bit.”

Hamish Pepper, Lyra’s tactician, explained today’s victory: “The guys sailed very well and did good peels and drops. Possibly the breeze favoured us and when it went light the others got stuck while we managed to sneak through.” Overall Magic Carpet Cubed still leads the Wally class, tied with the Wally 100 Y3K.

Among the Super Maxis there was another fierce battle between the Js Topaz and Ronald de Waal’s Velsheda, despite Velsheda being OCS. “We pushed hard to start at the pin but two other boats wanted it too and they were more manoeuvrable than us,” explained Velsheda’s tactician Tom Dodson.

Topaz’s helmsman Peter Holmberg gave his take: “It was a great race – three hours of full-on focus on tactics, speed, etc. They were OCS, but we also liked the right and got the right. We got a good lead but then coming into Golf it was patchy and they got one puff and came right into us again. Then we spent the next two hours fighting.” Ultimately Velsheda wasn’t quite able to recover, finishing 33 seconds behind under IRC.

The Maxi Racer class was today won by Irvine Laidlaw's Reichel/Pugh 82 Highland Fling XI, which now leads overall, tied with George David's Rambler 88. “It probably favoured us a little bit being slightly lighter wind in general,” explained tactician Cameron Appleton. “We are a bit lighter while the other boats are wider. We had a great start and a good first leg. Then on the first run, we were able to make a gain, gybing back in as the breeze went right and built. So we held our time in the early part of the race.”

After being beaten by the Southern Wind 90 All Smoke yesterday, today it was the Reichel/Pugh 84 Vera that prevailed. “It was better than yesterday, when we were not as good as we should have been in one or two manoeuvres,” said Argentinean owner Miguel Galuccio. “We did pretty well and it was a nice course and we sailed really well, always very close to All Smoke. We had a good start thanks to Michele [Regolo, Italy’s London 2012 Olympic Laser sailor]. The lighter wind probably favoured us because we have a lighter boat.”

Aside from Topaz, the only other boat still holding a perfect scoreline is Roberto Lacorte’s Vismara 62 RC SuperNikka in the Mini Maxi Racer 2 class which also sailed the coastal. “We had a good start and we managed the racing well in the conditions, which were quite stable today,” said Lacorte. “We were forced to defend our position approaching Mortorio, because Wild Joe is very fast downwind, but we stayed in touch and upwind we are a little faster.”

Racing continues until Saturday 7th September. Tomorrow it is the turn of the Wallys to sail windward-leewards.