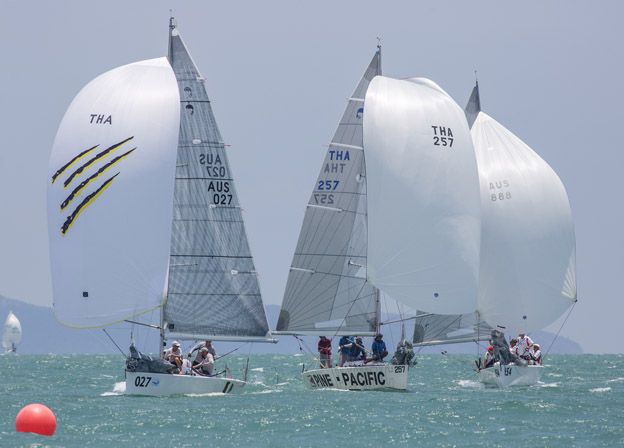 PATTAYA, Thailand – Today is Day 4 of the Top of the Gulf Regatta Presented by Ocean Marina, but only the third day of racing in the keelboat and multihulls' four-day series. All other classes finished their series last night and now full attention turns to the big boat course which enjoyed another “Champagne” day of sailing.

So often you get either wind or blue skies, and sometimes you get neither, but the 2016 Top of the Gulf Regatta has had unlimited supplies of both departments and today it was another 12-15 knots with two races for most, a mix of windward/leewards and passage races.

Ray Roberts' Millenium Racing (AUS) was off the pace in the first race for IRC 1 today but improved in the second tracking Kevin Whitcraft's THA72 (THA) on a passage race, however, it wasn't enough to trouble THA72 whose two race wins today extends his lead at the top.

In IRC 2 the racing is close with only seconds on corrected time separating podium spots. It was two wins for Jessandra II (THA) today but in the second race just 16 seconds separated them from Fujin, while Loco (USA) is on a late charge up the leaderboard and currently sits third overall.

The trainee crew on SailQuest Hi Jinks (USA), despite placing third in both races again today, are enjoying the great sailing and gaining experience while chasing Nautical Wheeler (UK) who slotted into second, twice, leaving Amanda (THA) to clear-up at the top in both races. After 2 hours 22 minutes of racing in Race 2 just 42 seconds separated Nautical Wheeler and SailQuest Hi Jinks – a sign the student crew are improving as the series continues.

The surprise Russian package of Valeriy Dichenko in the Platu Class is making his mark with a 3,5 scoreline today moving him up the standings to sit equal third overall. Today, however, was a day for the Thai teams with Ithinai Yingsiri placing second in Race 2 and Wiwat Poonpat second in Race 1 and with that moving to equal third in the standings.