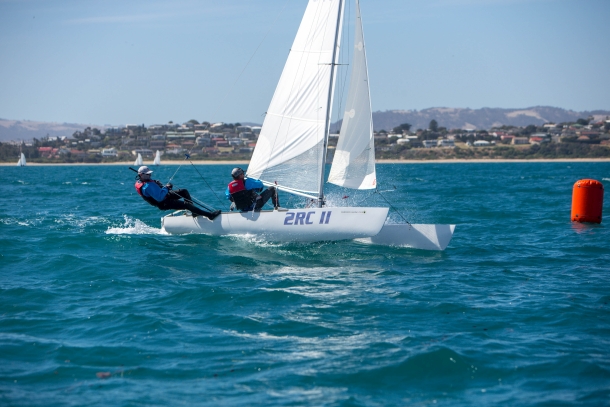 For 2015 The Cobra Catamaran Association took a brave move and decided to stick with Stingray Catamarans and go to South Australia as the third member of the catamarans Arrows opted for sole event Cobras and stingrays joined the Yvonne class at Victor Harbor As the second year of the square head the McVey brothers retained there very successful gear and sails of last year as did most of the other competitors.

Racing at Victor Harbor is almost certain to provide many varied conditions and three races were postponed two for strong winds and one for no wind while the final race was stopped when a strong South Westerly change knocked down most of the fleet providing unsafe conditions.

Thus the whole spectrum of sailing conditions was provided. It quickly became clear Scott and Breck McVey were faster and smoother winning every race they contested. The battle for second was close and the final places could have been different if the last race could have been completed. Victorians Robert Nixon and Joanne Bell-Harper were second with David and L Bandrock taking third. Ric Nixon sailed the series cat rigged without a crew and still took forth place after finishing second in several races. With next years event on the McVey’s home ground of Maroochydore others will have to improve to take the title.

Efforts are being made to get some past champions to rejoin the fleet to add to the excitement.