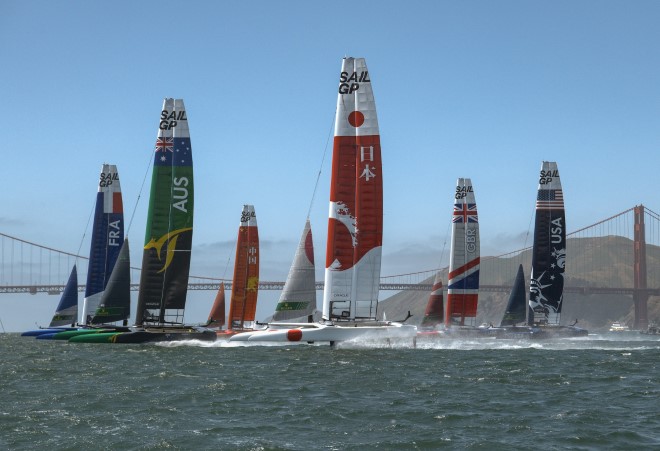 A day before SailGP's official race debut on San Francisco Bay, the atmosphere is building, as the six competing teams in the new global championship have completed their final checklists and concluded their training.

After weeks of anticipation and fine-tuning a fleet of the most technologically advanced boats in the world, SailGP's U.S. debut is just hours away.

Preparations on shore are being completed, with the Race Village on Marina Yacht Club Peninsula taking shape, promising the best views of all the high-speed action. With the grandstand seats sold out on Saturday, San Francisco SailGP is proving to be the hot ticket in town.

Fans got a glimpse of what to expect today, when six of the world’s fastest race boats took to San Francisco Bay for the final practice opportunity before the races start to count.

Each team had a moment of standout performance; at one mark rounding, the spread between all six boats was less than 30 seconds. One slip from a top performer and this weekend's racing could be any team's game.

After a long week of training full of high drama, the final practice races were a chance for each team to get one last look at the Bay's conditions, which are far different from the lighter breeze seen at the inaugural event in Sydney.

Last chance to level-up
The pace was quickly set by the Japan SailGP Team, which dominated the practice day, leading the three races and winning the match race against the British team.

The Japanese nearly broke the elusive 50-knot barrier just before the finish of the final race. A top speed of 49.1 knots surpassed all speeds set by the revolutionary F50s since the season began.

“On that final reach in the match race, we were really flying coming into the finish line and I had a glance at the speed. I saw 47 knots, so I foolishly started counting, 47, 48, 49 and then had a massive nose dive right before the finish, so we will have another go at it tomorrow,” SailGP Team Japan helm Nathan Outteridge said.

“I must have got a bit distracted, so it really shows you how much concentration is needed on these boats,” he said.

At home in California, the United States SailGP Team showed that the hard work had paid off and have made great strides this week to contend with the very top competition. The young team proved it isn’t to be easily written off, fueled by a home win in front of friends and family.

“We're ready, we've had a couple of weeks now training, a lot of good practice and we've made a lot of big improvements, so we're starting to race with the other teams,” grinder Mac Agnese said.

“We're really excited, we are racing right next to the grandstand, its super close, the boats make incredible noises, so it should be super exciting for everyone, action-packed, close quarter racing. We really hope fans will come down and cheer us on.”

The first U.S. SailGP event kicks off tomorrow with the high-adrenaline competition taking place just a few meters from the grandstand.

Details on how to watch the global broadcast can be found at: SailGP.com/watch