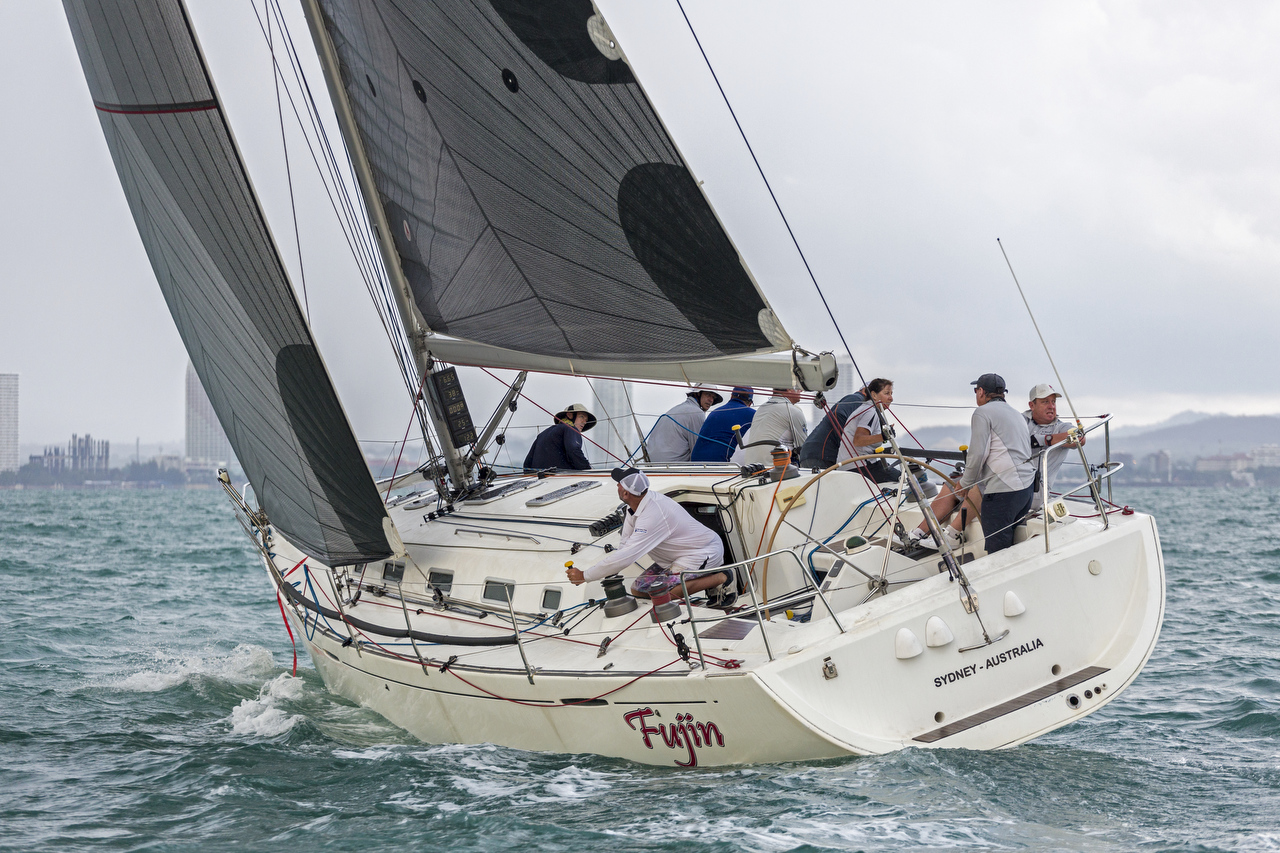 Pattaya, Thailand: When the wind doesn't play ball, it's a tough day on-the-water and today was one of those days. All classes headed out to their respective courses to be greeted by light breeze and come start time, it was even lighter.

A start for IRC Racing 1 was aborted in sequence forcing the Race Officer to AP while the fleet waited, and waited. Come early afternoon, Classes 1-6 were sent back to shore and the AP raised onshore. 13:30 it was down and the fleet headed back out to be greeted by a storm, lots of rain, some thunder, gusts and finally enough breeze to get in some racing.

Keelboats and Multihulls
In Race 6 today, Noppakao Poonpat, skippering THA72, got the best of starts while Team Hollywood ducked behind for fear of being OCS. THA72 lead around the windward/leeward course and rounding the top mark for the second time, ahead.

As both rounded the two TP52s split and Team Hollywood chose the better side of the course to cross the line first and claim the handicap win. An OCS for both on the second race saw a re-start in which THA72 was over again and in the process gifted the win to Team Hollywood.

Two wins for Fujin in IRC Racing 2 today sees them cement their lead at the top, while a nine second advantage on corrected time for Tenacious in today's second race see them finish the day with a 2,2 to keep the pressure on.

The lights winds weren't kind to MoonShadow2 in IRC Racing 3 as they slipped to a 3,2 on the day. Two hard earned first place finishers for the Japanese crew on Team Spray see them with a two point lead at the top with the discard now in play.

There was just a single race today for the Platu class. An OCS for Easy Tiger V saw them playing catch-up throughout. Rounding the top mark second to last, they managed to claw back some places to finish in eighth.

However, in the protest room the Jury decided they were not OCS and offered redress, resulting in them being named winner of the race and they now go into the final day with a comfortable lead ahead of Team ViewPoint in second.

A long race in softening breeze for the Multihulls and it was Bob Garner and crew on Blade Runner IX who sailed smart to add another bullet to their tally and increase their lead to five points over Sonic in second and Edenko in third.

Thailand SV14 Para Sailing Championship
Despite the tricky conditions, the SV14 teams managed to complete three races today and as the wind dropped towards the end, positions were swapped.

The Thai duo of Paisol Pateh/Mahseedi Hadumor continued in their winning ways with two wins in the first races, but had to settle for fourth in the final race of the day. With the discard now in play, the fourth can be dropped and they retain a healthy nine point lead at the top of the standings.

Victory in the final race for Russel Vollmer/ Cherrie Pinpin, and finishing the day with a 3,2,1 scoreline, sees them just three points off fourth placers, Jo Mengel/Anwarmay while Kristo Priks/Peep Krusberg sit in third.

IOM RC Yachts
Top of the Gulf Regatta prides itself on its diversity and 12 International One Metre Radio Controlled Yachts started their series today. After 10 races were completed Narongrit Singhasaenee leads the standings on 19 points ahead of Dean Martin two points further back. Narin Palatikanon sits in third on 24 points.