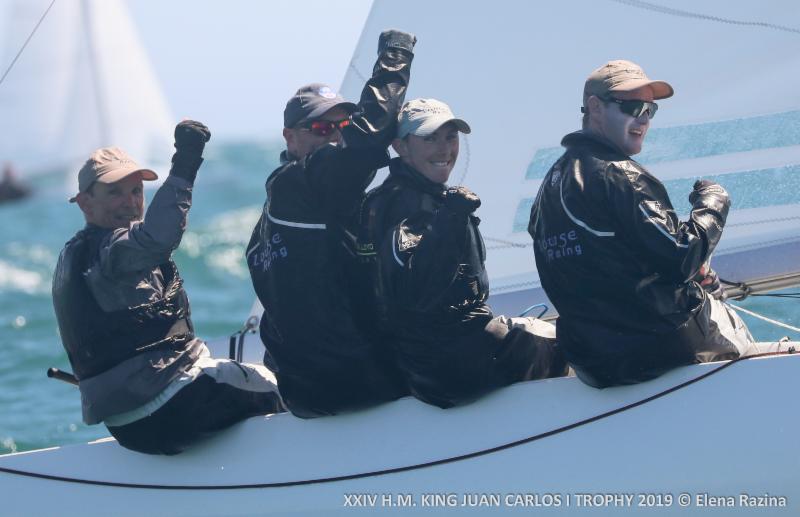 Grant Gordon and crew celebrate their win in the King Juan Carlos Dragons 2019.

Initially the fleet was held ashore awaiting the sea breeze, putting the Race Committee under pressure to achieve two races before the 14.00 last warning signal. Fortunately clear blue skies and hot sun brought the wind in early and at 11.30 the first race was underway in 10 knots and building. For only the second time in the series the fleet got a clean start at the first time of asking and Heerema rapidly put his stamp on the race to win comfortably. Behind him Gordon held off the pack for second place with Stenbeck third, Samokhin fourth and Loginov fifth.

With the time limit approaching the Committee rapidly reset the course and by the time the fleet had returned downwind they were into sequence with the wind continuing to build past 20 knots. With the overall scores recalculated Gordon, Stenbeck and Loginov now held 30 points a piece, Samokhin was on 31 and Heerama and Rathsack both counted 35, so everything would rest on the final race.

Once again some misjudged the current resulting in five boats being over the line and disqualified under the U Flag. As the numbers came over the radio Loginov's was among those called and he was reluctantly forced to turn for home. That left Gordon, Stenbeck, Samokhin, Heerema and Rathsack to battle it out, and battle it out they did, putting on a superb show for the spectators.

Gordon got the upper hand early on and defended his lead to the finish, but behind him the dog fight to end all dog fights was taking place for the remaining podium places. Heerema did everything he possibly could and crossed in second place, but with Stenbeck hard on his heels it wasn't quite enough. Rathsack finished fourth and Samokhin trailed home in seventh, behind Andrade and Otto Pohlmann (GER1205).

The week's top Corinthian performers were Miguel Magalhaes (POR56) and his team of Jorge Pinheiro de Melo and Jose Magalhaes, who gave some of the pros a good run for their money. The fight for second and third place in the Corinthian Division came down to a single point with second place ultimately going to Guy Gelis (BEL88), who narrowly beat Manuel Rocha (POR47).

With two events in the four regatta 2019 Dragon European Cup now completed Grant Gordon takes the overall lead in the series by three points, with Pedro Rebelo de Andrade second and on equal points with Hugo Stenbeck. Dmitry Samokhin is fourth and Pieter Heerema fifth. The European Cup series will continue at the 2019 Dragon German Grand Prix in Kühlungsborn from 3 to 6 July. The final regatta in the series is the Dragon Grand Prix Spain in Palma de Mallorca from 11 to 14 November. This will be immediately followed by the Dragon European Cup Grand Final on 15 and 16 November, for which the top 20 boats, including a quote for Corinthian teams, will qualify.

At the prize giving José Sotto Mayor Matoso, a Former President of Clube Naval de Cascais and himself a top Dragon sailor of many years standing, thanked the competitors for travelling to Cascais. He also paid tribute to the event's sponsors Tourismo Portugal, the Municipality of Cascais, PWC, Vista Alegre and Leitao & Iramo who created the trophies, and the after sailing party sponsors Yanmar and specialist brewer René Brozius for their most generous support.

International Dragon Association President Vasily Senatorov took the opportunity to recognise the extraordinary level of competition at the regatta and to invite the sailors to join him for the remaining events in the Dragon European Cup series, the Dragon Gold Cup in Medemblik in June, for which over 100 boats are already entered, and the very special Dragon 90th Anniversary Gala Regatta in Sanremo in October, for which some 200 boats are expected.

The prizes were presented by another former Dragon sailor, Clube Naval de Cascais Honorary Commodore Patrick Monteiro de Barros, and the sailors honoured their champions. A particularly warm cheer went up as Peter Gilmour came forward to accept the Stavros Prize as the winner of the first race. Having won that race Peter sank his Dragon on the sail home, went on to recover it the next day and then completed the championship, finishing in thirteenth overall despite missing two races – a mark of a truly committed Dragon team!

The ceremony concluded with the presentation of the spectacular HM King Juan Carlos Trophy to Grant Gordon who was fulsome in his praise of the regatta organisers and race committee and of his crew. He also paid tribute to his late father Charles, who lived in Cascais for many years, and to his mother Louise, after whom his boat is named.

Also speaking at the prize giving was 16 year old Jahrvan Knight, one of the pupils from London's Greig City Academy Project Scaramouche, who raced in their first ever Dragon regatta this week. He and his crew of Jessey Opoku-Ware (12), Jayden Owusu (14) and sailing coach Martin Evans did exceptionally well bearing in mind they had never been in a Dragon until five days ago. Their results improved throughout the week, peaking with an eighth place in today's seventh race. Jahrvan spoke movingly of the teams gratitude for the support and encouragement they have received from 8th Dimension Performan Sailing's Pedro Andrade who lent them the boat, from the fleet as a whole and from the various members who loaned them sails and equipment. “Its been a priviledge to sail against you this week,” he concluded to rousing applause.