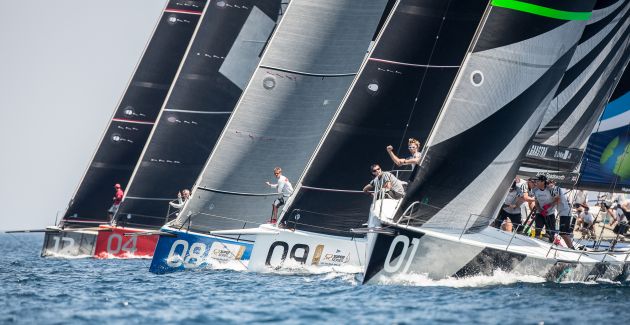 (Wednesday 25th May – Scarlino, Tuscany) – There were few surprises on the long awaited first day of the new 2016 52 SUPER SERIES season. Along the race dock of Tuscan’s showcase Marina di Scarlino the nervous tension bubbled from early morning right through until dockout time. But the two light winds races adhered to the letter the widely expected plot line when Quantum Racing emerged with a small three points lead – smart, patient, percentage sailing being their Day 1 watchwords – and no fewer than four boats all log-jammed into a share of the same 7 points tally between second and sixth in the 11 boat fleet.

Quantum Racing’s tenacious tactician Terry Hutchinson may have expressed his concerns that their team was not quite at the high level of readiness he would have wanted, but the American flagged crew made key crucial gains, going forwards in both windward leeward races to score a first and third and so lie three points ahead of the four boat cluster.

When they lost Alegre on the first run of the first race they fought hard to get back into the lead on the second run, so taking first blood for the season, leaving Andy Soriano’s team to second place. And in the second contest Quantum Racing showed their mettle when they chipped away to convert a fifth at the top of the first beat to a third on the finish line.

“It’s two down 48 to go” smiled Hutchinson ashore after racing. He considers they sailed little different today to how they did in yesterday’s practice race when they made a sixth.

“We had a great session this morning talking about the mistakes we made yesterday, and how we are continuing to do the high percentage things that we think are going to work. Yesterday [practice race], we felt like we did that, but we got absolutely nothing for it. But overall the boat is going quite well. We have quite a good setup.

Just as every team has expressed their pre-season belief that this will be an incredibly close season, the level being almost universally high, so there is an immediate, ringing endorsement with four boats – all you would consider as podium contenders for a regatta or at the end of the season – unerringly finishing Day 1 on the same points. Takashi Okura’s Sled won the second race and matched that to a sixth and are credited with second overall.

Platoon’s fifth in the first race is bolted to an excellent second behind Sled in the second race. Alegre showed great potential but might rue small losses for a 2,5 when it could have been a 1,3 had they converted their best positions in both races. Rán Racing, with Morgan Larson and Adam Beashel combining on tactics and strategy, proved to be one other team along with Quantum Racing which made important successive gains. They transformed an early fifth to a third in Race 1 and then a Mark 1 sixth to a finish line fourth in Race 2. Gains down the last run were a notable aspect of the Rán game.

Of course there is little of real solid substance to be extrapolated from Day 1 of a season which is likely to comprise somewhere around 25 days and perhaps 45 or 50 races which all count. In essence it just sets the ball rolling, buries the first day nerves – which were very evident in the way some teams sailed – and sets the 52 SUPER SERIES down to business in this fifth year of is existence.

The Scarlino race arena – new to this 52 SUPER SERIES circuit – delivered light, shifty breezes which were hard to read. Staying in the best strands of wind pressure and changing gears was vital.

Now with a full year of racing under their belts since the newest generation of boats were launched and prepped hurriedly for the Valencia opener 12months ago, suffice to say that Day 1 may not have yielded any big, toys out the pram upsets, no high octane drama but instead it served only to whet the appetite further for what promises to be a truly mouth watering 52 SUPER SERIES season.

“It’s two down, 48 to go. It was a good day. We had a great session this morning talking about the mistakes we made yesterday, and how we are continuing to do the high percentage things that we think are going to work. Yesterday [practice race], we felt like we did that, but we got absolutely nothing for it. The boat was going quite well. We have quite a good setup. I think there was that and then there being a little bit of better pressure up the leeward left hand side going up the beat made for a good gain up the second beat where we were hanging on and defending.

Yes we were making gains but yesterday we went backwards. That’s the difference, but we didn’t sail any differently today than we did yesterday [practice race]. I think that we’re scratching the surface as a team about how we’re going to evolve. We had a great session on the boat this morning as well, on our way out, about things that we can go better. I’m very optimistic. The other unique feature is that now, we have a great training partner in Platoon, which is making for our ability to get faster through the water. We’re faster, as well, on shore. We debrief every morning and talk to those guys, I mean, they’re a great sailing team so there’s a lot of evolution that’s happening. It’s simply a matter of keeping it all pointing in the right direction.

“We’re reasonably happy. It’s going to be a long season, so to start the first day with two ‘keepers’, we’ve got to be happy with that. It’s more important for us to be consistent overall than to win races, but it’s nice to win a race this early in the regatta. It just shows the work we’ve done over the winter to the boat, the boat’s going well, and the team’s going well. But it is certainly going to be a tight series, and that’s why we’re here sailing TP52s!”