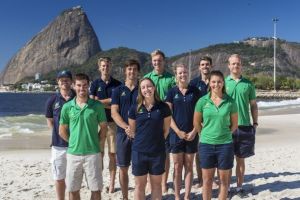 With less than 75 days to go until the opening of the Rio 2016 Olympic Games, World Sailing Chief Executive Officer Andy Hunt and Head of Competitions Alastair Fox this week participated in a final on-site review of preparations for the Olympic Sailing Competition.

Briefings were provided over two days on key operational and service areas for the Olympic Games, including venue construction, competition schedules, broadcasting, media operations, accommodation, transportation and ticketing.  A detailed briefing was also provided on the continuing efforts to improve water quality in and around Guanabara Bay, the venue for Olympic Sailing.

The briefings were led by Rio 2016 Sport Sailing Manager, Walter Boddener, and his operations team.  Hunt and Fox were joined by Darryl Seibel, who will serve as Chief Press Officer for World Sailing during the Rio 2016 Olympic Games.

The World Sailing delegation also met with Rio 2016 security officials to learn more about steps that can be taken to increase safety for athletes and coaches, particularly during pre-Games training periods.  This advice will be shared directly with World Sailing Member National Authorities, according to Hunt.

“We appreciate the work being done by Rio 2016 and its partners to welcome the best sailors from around the world for the 2016 Olympic Games,” said Hunt.  “Since our last visit in March, considerable progress has been made in preparing for the Olympic Sailing Competition.  Construction at the Marina da Gloria is almost complete and the water quality is noticeably better, particularly in the launch areas around the marina.

“During our review, we had an opportunity to meet with officials from the Mayor's Office and leading environmental authorities to review their latest water-quality data,” added Hunt.  “The trend lines are encouraging, but it will be important that not a single day is lost in implementing the remaining measures that are planned, including the installation of a series of new eco barriers.”

“Our primary focus is to make certain the field of play on Guanabara Bay is safe and suitable for all Olympic competitors,” said Fox.  “Working with Rio 2016 and various governmental authorities, I'm confident we have the right plan in place to deliver a field of play that is safe and fair.  Equally, as with every major sailing regatta, we have detailed plans in place to respond and adapt should conditions change.”

The natural beauty of Rio de Janeiro will provide a spectacular backdrop for sailing, which will enjoy a particularly bright spotlight during the upcoming Olympic Games.

“Brazil has enjoyed tremendous success in Olympic sailing and athletes such as Robert Scheidt, Torben Grael and Marcelo Ferreira hold a special place in Brazil's sporting culture,” said Hunt.  “Given this history of success and the profile sailing enjoys in Brazil, it is our hope that the beaches surrounding Guanabara Bay will become one of the truly special places for fans during the Rio Games.”