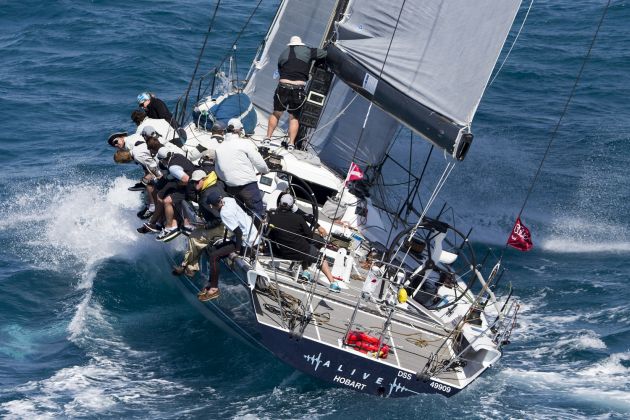 Unprecedented early entries, among them Karl Kwok’s Beau Geste from Hong Kong, and a new major sponsor in Carlton and United Breweries (CUB), have put Airlie Beach Race on course for a record breaking year.

Beau Geste, the champion TP52 owned by Karl Kwok, will no doubt be the star attraction in the IRC Racing Division

Sixty owners have already confirmed for this year’s Festival of Sailing, including Kwok, a devotee of major Australian sailing events. He will come to Airlie Beach with his one-year old boat to ‘fine tune’, as he targets a hat trick in both the IRC Australian and NSW Championships.

Unquestionably the fastest TP52 to ever race in Australian waters, Beau Geste will represent the Royal New Zealand Yacht Squadron. Her crew includes a few Kiwis, such as Gavin Brady, who has been Kwok’s right-hand man for years.

Boat captain, Cameron Ward, says: “Karl wants to come and support another great Australian event and thinks Airlie Beach Race Week is a great event to come and tune-up for the Australian IRC Championship ahead.

“The boat is already in Mackay and we’ve booked the accommodation and marina berth. We’re ready to go.”

Airlie Beach Race Week reigning champion, Matt Allen (Ichi Ban), is unable to defend his title. “It’s with deep regret I will not be there, but this year it clashes with the Olympic Games. Allen, the president of Yachting Australia, will spend the first half of the Games at Rio in Brazil with the Australian Sailing Team.

In March this year, Alive claimed line honours in the Rolex China Sea Race and broke the 16 year-old record held by one of Kwok’s former Beau Gestes.

Entry for Airlie Beach Race Week 2016 closes at 2400 hours on Friday, 5August, 2016. The race committee may accept late entries after this date subject to an additional late fee.

Entry and Notice of Race online at: www.abrw.com.au/sailing/entries