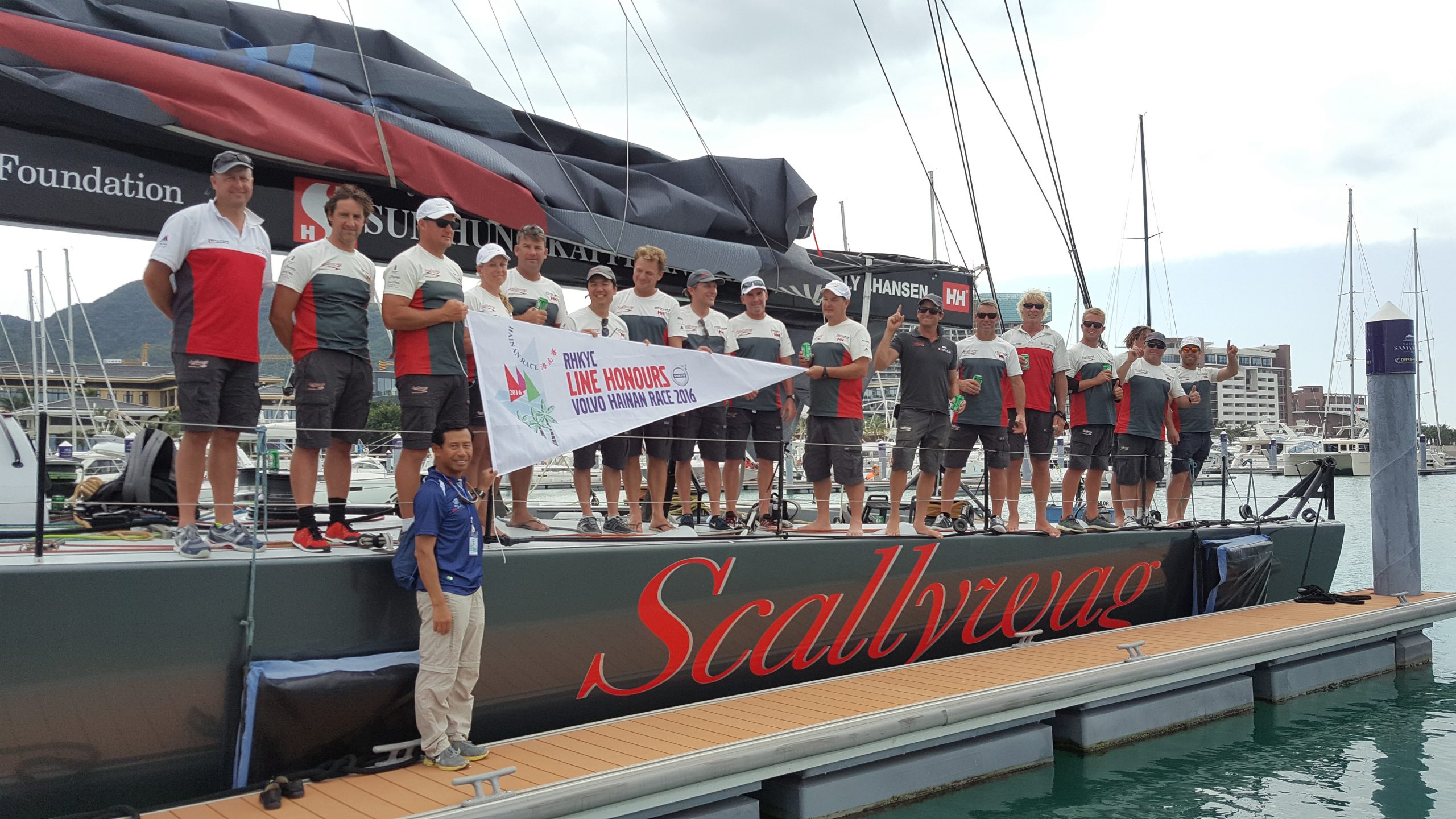 Scallywag at the end of the Hainan Race. Photo RHKYC Iris Yang.

After the arrival of Scallywag at 12:51:52 yesterday and their record breaking sail and Line Honours win of 23h 31m 52s, the next boat to arrive was Sam Chan’s TP52 FreeFire. She sailed across the line at 20:19:54 cementing her position as 1st in IRC Racer 0 and 2nd in IRC Racer Overall.

Owner Sam Chan commented on the race “The race was fast….  well, not as fast as last time but still fast.   We had lighter wind to begin with but very good wind offshore.  We were sailing a VMG around 12 to 13kts and a much bigger boat speed.  We ended up jibing around four or five times.   My top boat speed was 23.2kts but another crew member got 23.8 knots.  I think the top wind speed we saw was close to 3kts.  Yes it was a good race and I enjoyed it!”

After FreeFire and ahead of the other TP52 last night was Anthony Roots’ Ker Custom 42 Black Baza finishing at 23:09:54; giving her the win in IRC Racer Overall and the win her division IRC Racer 1.  Black Baza has added this to her previous wins in IRC overall in the 2016 Rolex China Sea Race and the 2015 Hong Kong to Vietnam Race!

Anthony Root commented on the highs and lows of the race, “I think the lows of the race were easy, we had some troubles with various types of gear on the boat that we had to overcome, there was a point that we couldn’t get our spinnaker down.  The highs; it’s terrific to rush to sail down the waves and be out there in the open water! The biggest high was when we arrived as we had not realized we had won!  Top boat speed was around 23 knots.”

The last boat in the IRC Racer 0 division to arrive was TP52 Standard Insurance Centennial at 00:23:23.  Owner Ernesto ‘Judes’ Echauz said “It was a very good race although we got caught in some fishing nets at 1823hrs on the first evening out.  Getting the nets off was a big challenge as we had to pull the net up on a halyard with people on the grinders and then try to cut it off. There were many fishing nets where we got caught it took us quite a while to find our way out; we had to go north then we had to go west.  It was a good thing we had the Yellow Brick tracker so people knew what we were doing.  Besides the nets it was fantastic sailing; the wind was very strong downwind and consistent and I have never experienced this type of sailing before.”

After the arrival of Standard Insurance Centennial the race management team were able to get a bit of shut eye before the arrival of Fred Kinmonth’s and Nick Burns’ Sydney GTS 42 Mandrake III at 9:14:31 this morning.  Mandrake III went further offshore then any of the other boats in the fleet and was able to stay great breeze right until Luhuitou Jiao point where it turned into a bit of a drifter for about three hours before they finished.

Fred Kinmonth spoke about the race “overall it was great race, really windy and we had a lovely time.  Everything went absolutely fine although we blew up three spinnakers but apart from that we had great ride down absolutely no trouble at all.  There was great rapport amongst the crew; most of us have sailed together for about 14 years.”

With the breeze changing direction Mark Whitehead and Andy Lam’s Mills 40 Straight Up came into Sanya Harbour with the kite up only changing to the headsail right before the finish as the breeze shifted. Straight Up crossed the line at 13:11:43 giving them 3rd in IRC Racer 1.

The final two boats still racing in the Volvo Hong Kong to Hainan Race are Outlaw and Ymir who are estimated to arrive tonight around 1800hrs and 2300hrs.

A location prizegiving will be held at Serenity Marina 1t 1700hrs on Sunday 6 November followed by an official prizegiving back at RHKYC’s Kellett Island Clubhouse at 1900hrs on 23 November.

All boats are carrying Yellowbrick trackers, which update live tracking information at 30 minute intervals throughout the race, this can be viewed at http://www.rhkyc.org.hk/hkhainantracking.aspx

The race is organised by RHKYC in cooperation with the Bureau of Culture, Broadcast & TV, Publication and Sports of the Sanya Municipal Government, with the finish hosted by Serenity Marina in Sanya, Hainan.