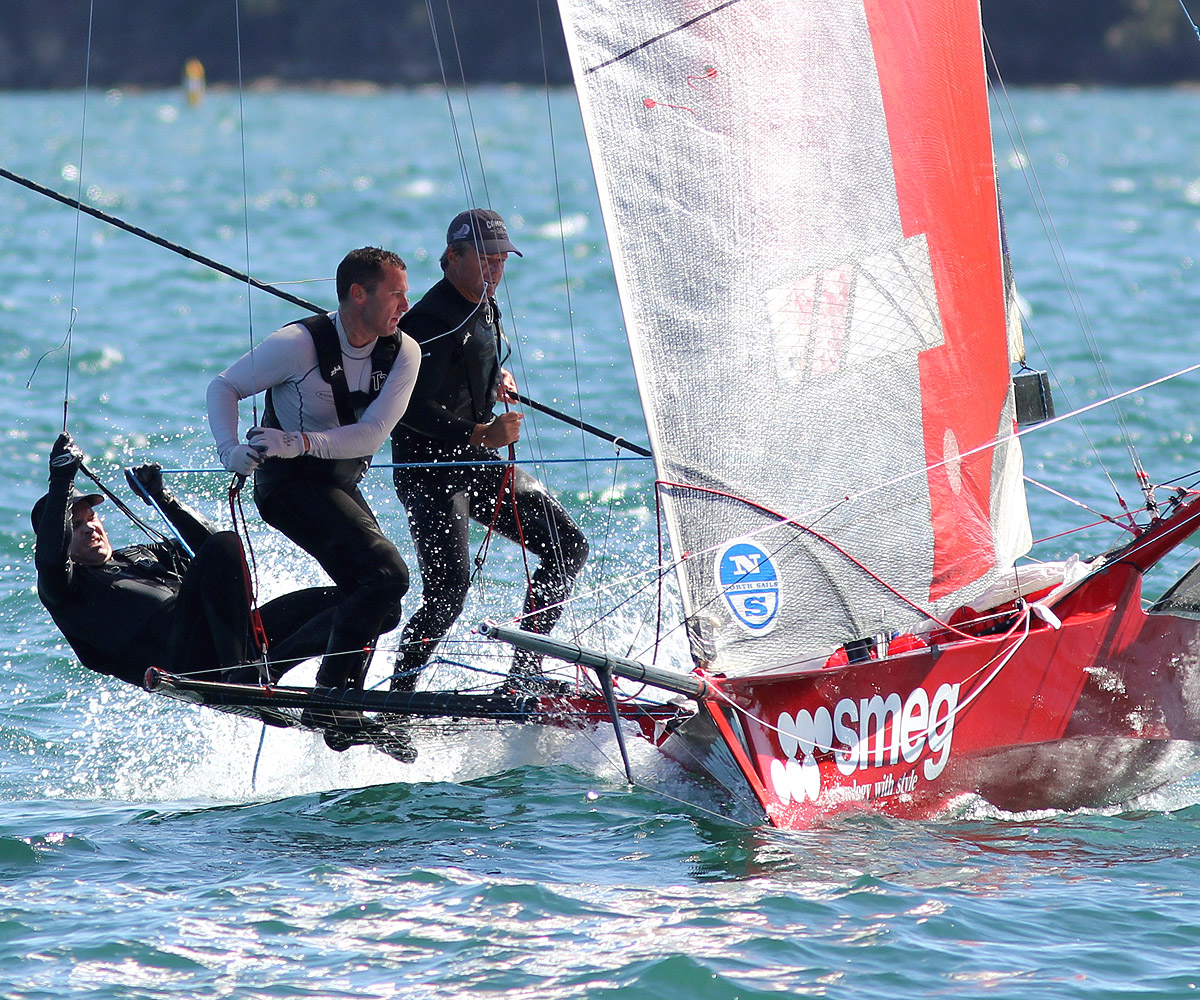 A reunited crew of Chris Nicholson, Ricky Bridge and Mike McKensey scored a convincing win with Smeg in today’s Race 2 of the NSW 18ft Skiff Championship on Sydney Harbour.

When the team’s regular skipper Lee Knapton was unable to sail in the race, former 18ft Skiff champion Chris Nicholson was eager to link up again with his long-time friends and former crew mates of two years ago. In a race of fluctuating fortunes which produced several different leaders throughout the race, the Smeg team showed great speed over the latter part of the long South-East course to win by 2m59s.

Following three weeks of strong winds, which has affected the racing, today’s ESE wind allowed most teams to carry their bigger #1 rigs and produced some very close racing in the leading group.

Smeg led the fleet to the first windward mark but had to be content to follow Coopers 62-Rag & Famish Hotel and Yandoo around the bottom mark, off Robertson Point, after a spinnaker run which saw positions vary wildly through the fleet. Line 7, Noakes Youth and Haier Appliances (Pedro Vozone) were not far behind the three leaders as the group went back across the harbour to the windward mark near Clark Island.

The Rag established a 40s lead at Clark Island, and led the fleet on the following two-sail reach into Chowder Bay. This leg of the course produced a change in the leading group when Smeg capsized. Noakes Youth made a move and reduced Coopers 62-Rag & Famish’s lead to 20s, just ahead of Yandoo.

A quick recovery by the Smeg team allowed them to still hold fourth place at Chowder Bay, ahead of Line 7 and Asko Appliances, which was struggling under a smaller #2 rig.

The whole race was turned on its head on the next spinnaker run, from Rose Bay to Taylor Bay, when Smeg grabbed the lead from Noakes Youth, Yandoo and The Rag.

Over the final three legs of the course there was little change in the leaders positions, although Line 7 stormed home to grab third place from Yandoo by 30s.

The race was another bad day for the defending champion Thurlow Fisher Lawyers team. Following last week’s costly capsize, which robbed them of a win, the team were forced out of the race just a few minutes after the start with gear failure.

Race 3 of the NSW Championship will be sailed next Sunday. The Australian 18 Footers League will have its usual Spectator Ferry available to follow all the action. The Spectator Ferry is also available throughout the entire 2016-2017 Season, leaving Double Bay Wharf, alongside the clubhouse, at 2.15pm.