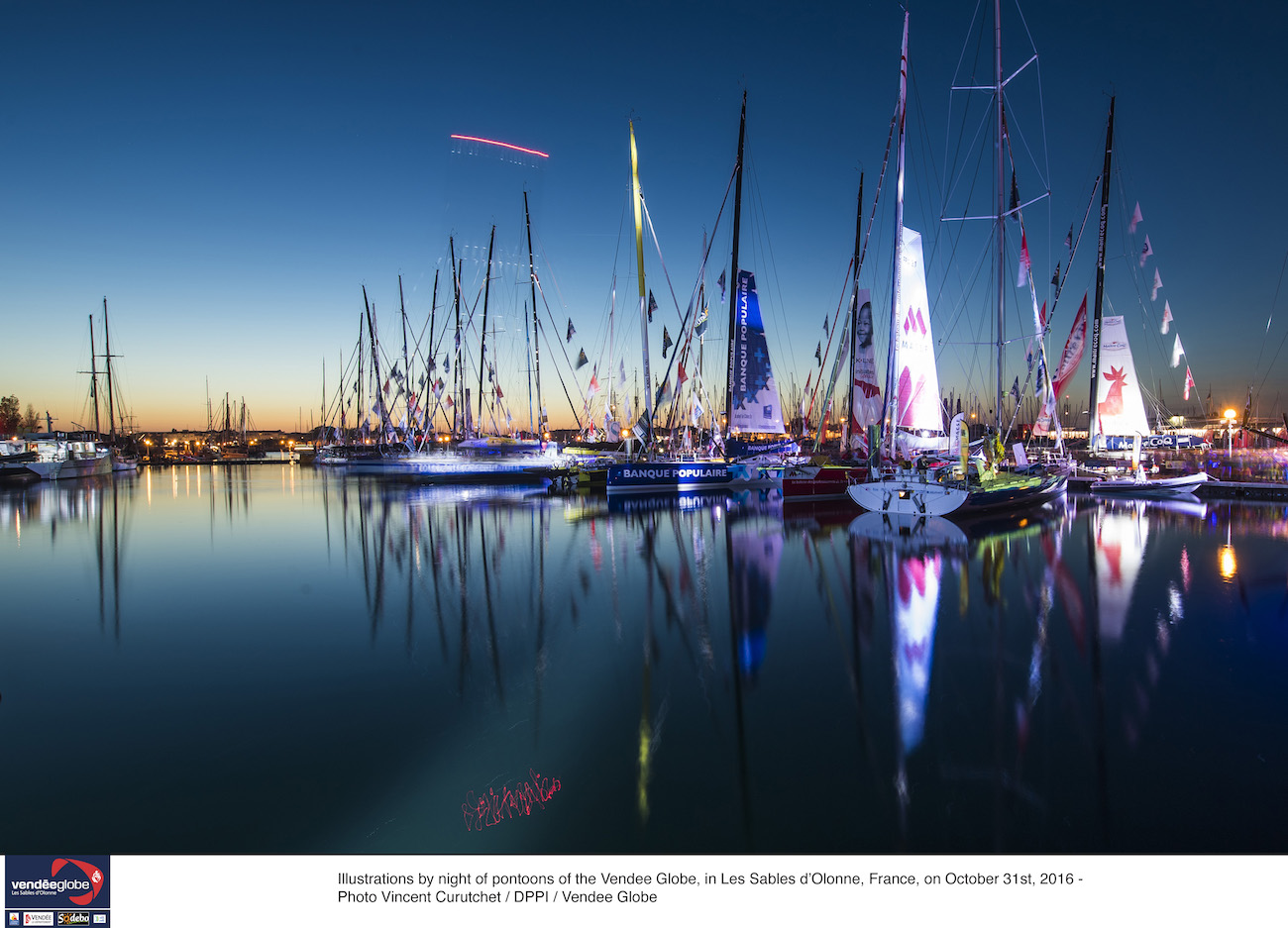 The Vendée Globe fleet in Les Sables d'Olonne ahead of the start. Photo Vincent Curutchet.

The month long spell of unseasonable benevolent, summer-like weather is set to hold through Sunday, giving the 29 solo skippers who will start the Vendée Globe solo non stop race around the world the most favourable starting conditions for many years.

The day before the start is more often marked by dark clouds hanging around the race dock, if not literally then at least figuratively. Typically, Saturday's emotional farewell gatherings are spirited and well meaning but usually in the full knowledge that the Bay of Biscay will deliver a kicking within the first 24-36 hours. But in light of a ‘to order' forecast of downwind conditions off the start line giving way to fast, straight line reaching into the Portuguese trade winds, the mood around Port Olona in Les Sables d'Olonne was positively festive. Bathed in the warm Autumn sunshine which seems to have prevailed for days, the skippers' smiles were wide and genuine – rather than the usual forced grimaces – when they left the final weather briefing this morning. The fast reaching and running conditions are expected to immediately benefit the foiling IMOCAs which should be up and off, literally flying south in a straight line towards Finisterre where winds should lift and build to 25-30kts.

The party mood ashore, tens of thousands passing through the race village, spread to the race dock, which is closed to the public to allow the skippers space and time to share their last day on shore with those close to them, friends, extended family, sponsors and VIPs. Enda O'Coineen seemed to have half of the Irish nation visiting at one point. Jean-Pierre Dick assembled his entire shore team on the deck of St Michel-Virbac for a photocall. Japanese skipper Kojiro Shiraishi showed continued patience and enthusiasm as his legions of friends and supporters from home took endless selfies and videos with the first Asian skipper to start the Vendée Globe. Alex Thomson looked cool and calm as he completed his lunchtime live stand up interviews with British TV media beside his Hugo Boss. Sébastien Josse is bright eyed, relaxed and ready as he quietly went about his final media commitments around the media centre. Sébastien Destremau took time out from his hectic final preparations – his faceOcean was crawling with technical shore team, friends and family early on – before a particularly poignant moment having his 1998 Finot design blessed. Conrad Colman and his team on the now renamed Foresight Natural Energy continued to re-brand his hull, sails and cockpit after finding a last minute sponsor.

As he came out of the last briefing to the skipper, Jacques Caraës, Race Director said:

“The final briefing is always important. It's the last time we get to talk calmly to the skippers. Tomorrow they will look very different. It's very emotional. Alain Gautier helped us give them the final recommendations and we talked about Guo Chuan, (Chinese solo skipper who was trying to set a record across the Pacific from San Francisco to Hawaii) who was lost at sea (last week). That helps put things in perspective, but we mustn't over dramatise it either. They all know that they are setting off around the world and it's not going to be easy. I told them to enjoy themselves and reminded them that the Race Directors are with them 24 hours a day. Conditions will be fine for the start, so there isn't as much to worry about. They will be setting off downwind, but that doesn't stop them from needing to be cautious, as they will probably be sail changes. The leaders will be off Cape Finisterrein around 20 hours.”

Dock talk has been of a potential record to the Equator. Yesterday a time of six to seven days was being suggested but Alex Thomson played that down today. “Six or seven days to the Equator? It is possible but maybe not quite as quick but we will see more on the next weather models. It is looking good for the start, 13-18kts so that is great, beam reaching for the first few hours, going right and so getting wider – lifting. At the weather briefing this morning they were seeing 35-40kts at Finisterre. I don't think we are seeing so much there. Then it is how you deal with the TSS – the traffic separation scheme which you are not allowed to go into. And then from there it is a rich get richer scenario. Everyone is dying to get south of the high pressure before it closes off.”

The scenario for the classically configured, non foiling boats is slightly different, as Foresight Natural Energy's Conrad Colman explained: “In the forecast there is a ridge of high pressure which will extend from the Azores towards Portugal and that has the potential to cut the fleet. And so it is a three month race but it would be a shame to have the positions defined in the first three days. For the floating boats, not the flying boats it will be 24 hours to get to Finisterre and then the first 48 hours can be more important than the first few weeks. There is a lot of pressure from the start. The plan is to rest up now and be ready to come out swinging tomorrow.”

High speeds for the first 24 hours

The 29 solo sailors will be able to sail quickly towards Cape Finisterre, a distance of some 350 miles, which will be the first major obstacle in the 24,400 mile round the world race. In a 15-20 knot northerly, the leaders should reach the coast of Spain on Monday morning, before turning left to head towards the Tropic of Cance. It is the first time since the first Vendée Globe in 1989 that the weather has been so favourable for the sailors, as they exit the Bay of Biscay to pick up the trade winds off the Canaries. The exceptional weather over the past four months on the Atlantic coast is set to last for a few days more, which should allow the skippers to head for warmer climes and even hot weather around the Equator, which they should reach in less than ten days. This would be better than the record time set in 2004 by Jean Le Cam (10 days 11 hours 28 minutes).

This situation has arisen because of the Azores high, which stretches from Iceland to the Azores and which is moving slowly south due to the influence of a former tropical low coming down from Greenland leaving room for the Bermuda high to move towards the SE to merge with the Azores high. Autumn is set to arrive with the end of next week looking nasty in Vendée…

Conrad Colman will start the Vendée Globe solo non stop round the world race Sunday safe in the knowledge that he will be able to share his incredible story with the outside world thanks to a very last minute sponsorship deal. Colman, the 32 year old French based soloist who holds dual New Zealand and American nationality has devoted the last dozen years of his life to his quest to compete in the toughest round the world race there is.

Despite relocating from North America and immersing himself in the French offshore sailing culture, becoming perfectly bilingual, working in the racing industry in Brittany, building himself a credible racing record including two round the world successes Colman could not attract a major sponsor for his 100% Natural Energy project. But his last minute calls made during the final pre-start week appealed to the London-based Foresight Group. The Iindependent infrastructure and private equity investment managers, the renewable energy market plays a significant role in their investment strategy. Foresight started investing in the solar sector in 2008 and is now the second largest solar asset manager in Europe. The company proved able to respond quickly, making their positive decision only on Wednesday. Their branding for Colman's IMOCA was made up in England by Thursday and driven overnight to Les Sables d'Olonne yesterday.

Speaking after the final weather briefing, less than 24 hours before the start of the 24,020 nautical miles race, Conrad Colman said: “It speaks testament to the value of the project we have created and also the power of the Vendée Globe, a spectacle that will reach millions of people around the world and I am delighted that Foresight, a company that comes from outside the world of sailing, can see value for them. Foresight invest in green energy companies and so it is particularly satisfying that I am being supported by company which shares the same values as me at the heart of their business. They have significant investments in solar and recycling and renewable energies. Now we have the means to communicate, to participate fully in this race and to share the adventure with the world. We have a great company behind us that have invested in our story.”

Speaking on board Foresight Natural Energy Ben Thompson, Group Marketing Director of the Foresight Group, explained: “Conrad's story interested us immediately. It came out of the blue, a genuine story of a skipper needing funding to complete the course with full communications in order to tell the story. We are a global company, increasingly global, with a focus on renewable energy and infrastructure. The alignment with Conrad's attempt to go around the globe without a diesel engine, relying on solar and hydro power, with an energy storage system which is a part of energy infrastructure that we are pursuing, all ticked so many boxes. We made our decision late on Wednesday, commission the boat branding Thursday, drive through the night to apply it yesterday and today. We as a company are expanding globally. The global nature of the Vendée Globe fits with our ambitions as a company.”