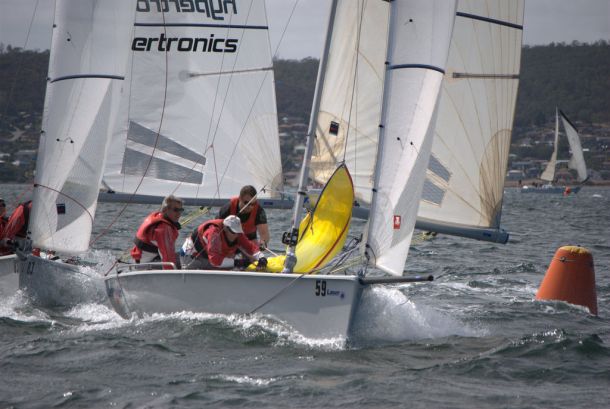 Close mark rounding in the SB20 class will feature their one design racing. Photo Peter Campbell.

Hobart’s leading SB20 sports boat skippers and their crews will sail a virtual dress rehearsal of their upcoming state and national championships when they contest this weekend’s Crown Series Bellerive Regatta on the River Derwent.

The big regatta began this evening with a spinnaker twilight race for other keelboat classes and tomorrow and one Sunday nearly 80 keelboats, including the SB20 sports boats, plus more than 60 off-the-beach boats, will contest back-to-back races each day.

Bellerive Yacht Club, organiser of the Banjos Shoreline Crown Series Bellerive Regatta, has agreed to run a special course for the SB20s, the largest one-design yacht class in Hobart and the largest fleet in Australia.

“We will attempt to simulate the courses for the upcoming championships, being run by the Derwent Sailing Squadron from 4-9 March, providing windward/leeward courses with a gate and a ‘hitch mark’ at the windward mark,” BYS sailing manager Tony Garrett said yesterday.

“Most of the Hobart boats expected to do well in the championships will be competing, so we can expect some spectacular one-design racing today and tomorrow with up to eight races scheduled,” he added.

The fleet of 14 SB20s entered for the Crown Series includes past and present Tasmanian champions Nick Rogers, sailing Karabos, and Scott Brain with his boat Brainwave having had its name changed to Ronald Young Builder.

Other prominent yachtsman racing SB20s this weekend include Hughie Lewis, a longtime supporter of the Crown Series with his former yacht, a Farr 40, along with David Graney in Wedgewood, Stephen Catchpool sailing Hypertronics, and Brett Cooper with a new boat named Cunic Homes.

Matt Bugg returns to his home waters in the International 2.4mR class, while a late surge in entries has seen more than 60 off-the-beach boats enter the regatta, with strong support for the International Cadets, Lasers and Optimists.

The Cadets fleet includes Angus Price and Archer Ibbott who, along with Sam Abel and Laura Cooper, from Sandy Bay Sailing Club have been chosen in the Australian team to contest the International Cadet world championships on Lake Garda, Italy, in late July, early August this year.

Heading the Laser 4.7 fleet is Tasmanian champion Sam King who finished second youth sailor at the Australian titles in WA in January.