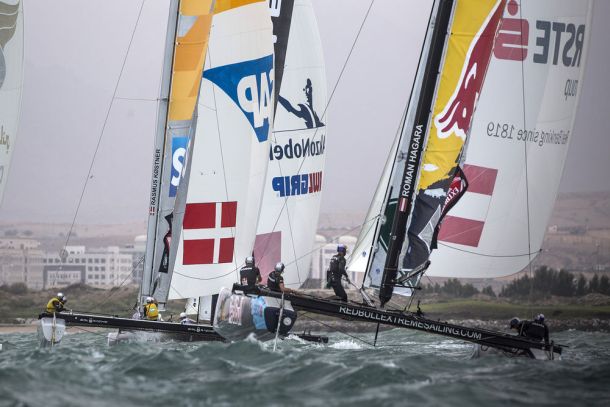 SAP Extreme Sailing Team showcased a winning formula on day two at the Extreme Sailing Series in Muscat, Oman, taking four bullets out of eight races in the shifty 15 knot north-easterly breeze and lumpy two-metre swell, that put a premium on boat handling.

Co-skippered by Jes Gram-Hansen and Rasmus Køstner, the Danish team displayed a quiet confidence on the water and clearly had a plan: hitting the committee boat end of the start line with precision, avoiding any engagement with the seven other Extreme 40’s and trusting the decisions of tactician, Køstner to secure the team’s position as overnight leaders with 113 points ahead of the penultimate day tomorrow.

“We had a fantastic day,” explained tactician Køstner. “Jes (Gram-Hansen) was starting really well, we had good acceleration off the line, we were able to put ourselves in a situation where we could choose the layline, and could sail fast around the track. Four out of eight race wins is a really great result. We are going to stick to the same game plan tomorrow and see if can keep improving. I know the other guys in the fleet will come back and make a few changes, but there are also things we can do better.”

SAP Extreme Sailing Team took an average of 8.38 points per race from a possible 10, and were the average fastest around the track – find out more about their winning formula with the SAP Sailing Analytics here.

A team that struggled with consistency today was two-time Series winner The Wave, Muscat – a nerve-racking position for the home team, after beginning the day in the lead. Tactician Sarah Ayton gave her account of a tricky day on the water, “It was actually quite shifty, the pressure was up and down so you had to treat each leg differently. A great start was key, especially in the big sea state – by getting a good start you could create space to sail the angle you wanted, and that led to race wins. SAP were impressive, so we need to sort it out for tomorrow.”

Rounding off the overnight podium, Oman Air stuck with their ‘bigger picture’ formula, chipping away in mid fleet and keeping out of trouble on the racecourse to finish the day just 10 points off leaders SAP Extreme Sailing Team.

The choppy conditions took their toll on the boats today as the swell from last nights storm caused a series of gear issues as the fleet ploughed through the troughs and peaks of the two-metre waves.

First to suffer was Gazprom Team Russia, who were forced to retire from racing after completing only half of the days races, as helm Phil Robertson explained: “Not a lot was going right for us and our speed was just gradually decreasing. We were fighting pretty hard to find out what was going on, then we realised our front beam was collapsing a little under the mast. When we finally figured it out we had to call it a day and get the boat out of the water to minismise any more damage. It is going to be a hard fix, there is a quite a lot of laminating to do on the beam, and then we have to see if we have the spare parts to get it back together.” The team from Russia will have a night in the pitlane as the fight to get back on the water tomorrow.

It wasn’t all smooth sailing for Red Bull Extreme Sailing Team either, who were battling issues with their mainsail halyard for most of the day. Coming into the final race, the problem almost put paid to the teams day on the water, but a quick fix by bowman Shaun Mason at the top of mast got the job done in a race against the clock, and after a sprint to get to the startline, the team posted a third place putting them in fourth overall.

Finishing off the overnight leader board GAC Pindar, Lino Sonego Team Italia and Team Turx powered by Kaya Ropes all achieved podium positions throughout the day but like The Wave, Muscat struggled with consistency in the tricky conditions.

Tomorrow the forecast is for the wind and swell to subside as Oman once again throws a new set of conditions and challenges at the world class sailors of the Extreme Sailing Series Act 2 Muscat.

Tune in and watch the racing live from 1530 local time (GMT+4) www.extremesailingseries.com/live.