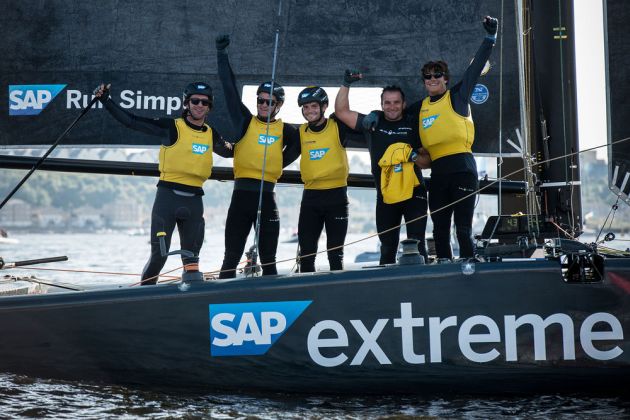 It went down to the wire between SAP Extreme Sailing Team and Alinghi in the finale of Extreme Sailing Series Act 6, Cardiff, but the Danes pipped the Swiss to the post in the final throes of battle. The Danish squad claimed its third win of the season to go top of the overall leaderboard.

Oman Air was forced to settle for third and hand over the 2017 lead to SAP Extreme Sailing Team, after Phil Robertson and his men struggled to find their form of the previous two Acts.

Over 90,000 spectators turned out over the Bank Holiday weekend to watch the international fleet in action on Cardiff Bay, and were rewarded for their efforts today with six nail-biting races and plenty of sunshine.

For a moment, the cracks began to show for SAP Extreme Sailing Team, allowing Alinghi to claw back vital points and enter the final double-points race neck-and-neck with its main rival. But, a disastrous start dashed any hopes of victory for the Swiss team.

“It feels really good,” said the winning helm, Adam Minoprio. “We went out there and started strong. The wheels fell off for a bit in the middle, and then we put the pressure on for the final race.

“That start, with Alinghi locked behind the committee boat and Oman Air over the line early, couldn't have gone any better. We are stoked that we could keep our composure and take the win in the last race comfortably, and we're really happy to take the lead as we head to America,” added a delighted Minoprio, whose team also included Rasmus Køstner, Pierluigi de Felice, Mads Emil Stephensen, Richard Mason and coach and co-skipper Jes Gram-Hansen.

Although he doesn't get to take home the prize, co-skipper Arnaud Psarofaghis was pleased with his team's progress after a sub-par performance in the previous Act: “It was a really good day and a good regatta for us. The team sailed very well and this was great for us after Hamburg. I'm disappointed to have had a bad start in that final race, but that's the game. Overall, we're really happy.

“It's all to play for and we can still win the season, that's the goal. We're just going to have to work harder next time,” added Psarofaghis, whose team won the Series in 2016 and currently sits third in the overall standings.

“It's been a very difficult event for us,” said Oman Air skipper Phil Robertson. “But, we're standing on the podium so all in all it's still a great place to be. We're the only team that has podiumed at every event so far.”

“We're pretty fired up now and the guys have got a lot of passion going forward into San Diego,” added Robertson.

Red Bull Sailing Team, skippered by double Olympic gold medallist Roman Hagara, found its feet as the day came to a close, posting its first bullet of the Act in the penultimate race. But, by that time, the damage was done and a podium finish was out of reach. The Austrian team finished fourth for the Act and remains fourth for the season.

NZ Extreme Sailing Team, helmed by America's Cup champion Josh Junior, follow the Austrian crew in fifth but take the Zhik Speed Machine Trophy, with insights from SAP, for the top speed of the Act at 23.2 knots. They finish ahead of the two British-flagged entries Land Rover BAR Academy and Team Extreme Wales.

The 2017 Flying Phantom Series drew to a close today and it was total domination for Red Bull Sailing Team. The Austrian squad has claimed victories in all four of the European Acts, in the first year the Series has been partnered with the Extreme Sailing Series. Culture Foil finish the season in second followed by Solidaires en Peloton in third. View the full results here.

“It's been amazing,” said winning helm Thomas Zajac, who sailed this Act alongside Will Ryan. “I have watched the Extreme Sailing Series for many years on TV, so it's great to be here and to sail in amongst it. It's always nice as a sailor having so many people coming out to watch you and getting to show off your sport.

“The racing was very tricky here in Cardiff but we managed to sail smart, tried not to put too much risk into it, and just did our thing. In the end it paid off,” commented Zajac on his victory.

Act 6, Cardiff marks the end of the European leg of the 2017 season, following events in Madeira Islands, Barcelona and Hamburg. The Series now heads to two brand new venues in the Americas for the final two Acts. Act 7 takes place in San Diego, from the 19 – 22 October.