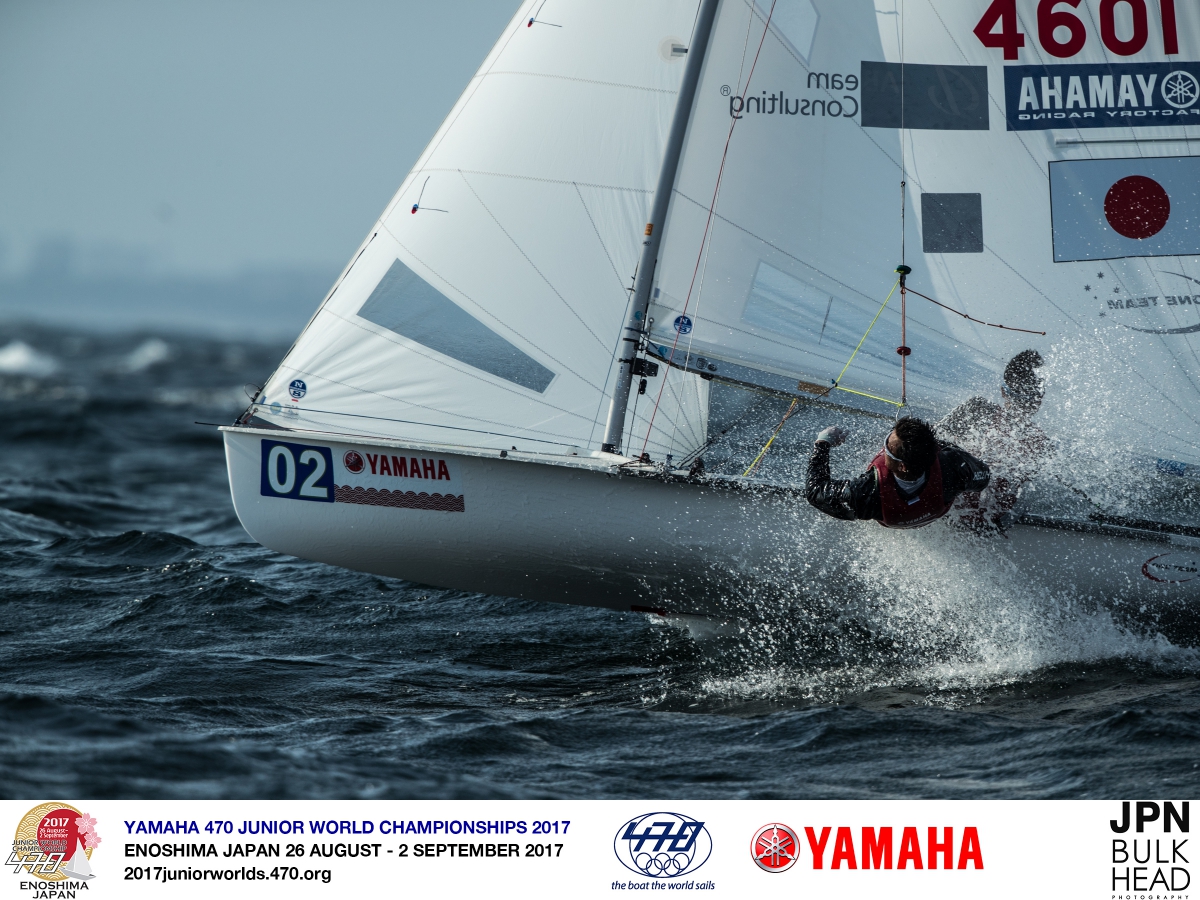 Race day 2 at the 2017 470 Junior Worlds in Enoshima was forecast to be breezy and Sagima Bay kept to its promise delivering between 15-25 knots of breeze and waves.

Neck and neck racing in three back to back races saw an escalation in performance as the 470 fleet powered around in strong wind, big wave conditions, which showcased the boat at it's best. Surfing the waves was as thrilling as bouncing upwind – with intensity, aggression and toughness all showing out on the race track.

470 MEN
Hippolyte Machetti/Sidoine Dantes (FRA) geared up in the breezy conditions to stake their claim at the top of the leaderboard, as results of 2,1, pushed them into the lead. But their glory was shortlived as Guillaume Pirouelle/Valentin Sipan (FRA) fought back to add a second win to their 3 race scorecard and reclaim the leader bibs they started the day with. Third to Daichi Takayama/Naoya Kimura (JPN).

Holding firm on the leaderboard are the USA’s Wiley Roger/Jack Parkin, who are racing their first ever 470 junior event, although have racked up plenty of senior fleet experience. This has all been part of their strategy, as Parkin explained, “This is definitely our big event of the year. From the start we really wanted to focus on doing well at this one. Racing in the senior fleets has been a huge experience that has allowed us to perform well in the junior fleet. We just came from the Japanese Nationals, so knowing the conditions and racing against a high fleet with Olympic and World Champions has really helped us coming into the Junior Worlds.”

The pair won the Youth Sailing World Championships in the 420 Class last year, and are now focused on their 470 campaign as part of the US Sailing Team squad.

“It’s great being here. The site is really cool and Tokyo 2020 is so real here, you can feel it,” added Wiley. “Even though it is 2 and a half years away, it feels like it is right around the corner. It’s really inspiring and keeps us in goal and why we do this sport.”

The Olympic magic rubbed off on them today as they racked up three more top ten finishes to end the day in 6th overall.

470 WOMEN
Benedetta di Salle/Alessandra Dubbini (ITA) took out the first race win, before defending Champions Silvia Mas/Paula Barcelo leapt up to the lead, sitting 1 point ahead of di Salle/Dubbini after race 4. By the end of the day, all change as di Salle/Dubbini reclaimed the lead on tieabreak over Illara Paternoster/Bianca Carusso (ITA).

“It was really exciting and very hard to sail today,” commented a dishevelled Barcelo back ashore. “It has been a long day with three races and the Italians sailed faster than us, but I think our decisions were a bit better. They are first overall and we will see tomorrow what happens.

“It was very strong and the waves were so big, like mountains! We would close our eyes and say ‘let’s see if the other is in the boat after the wave’,” laughed Barcelo. “It was funny!

Australia’s Nia Jerwood/Monique De Vries blasted around the track, claiming the only win not owned by di Salle/Dubbini, and shifted up to 5th overall from scores of 5,1,7.