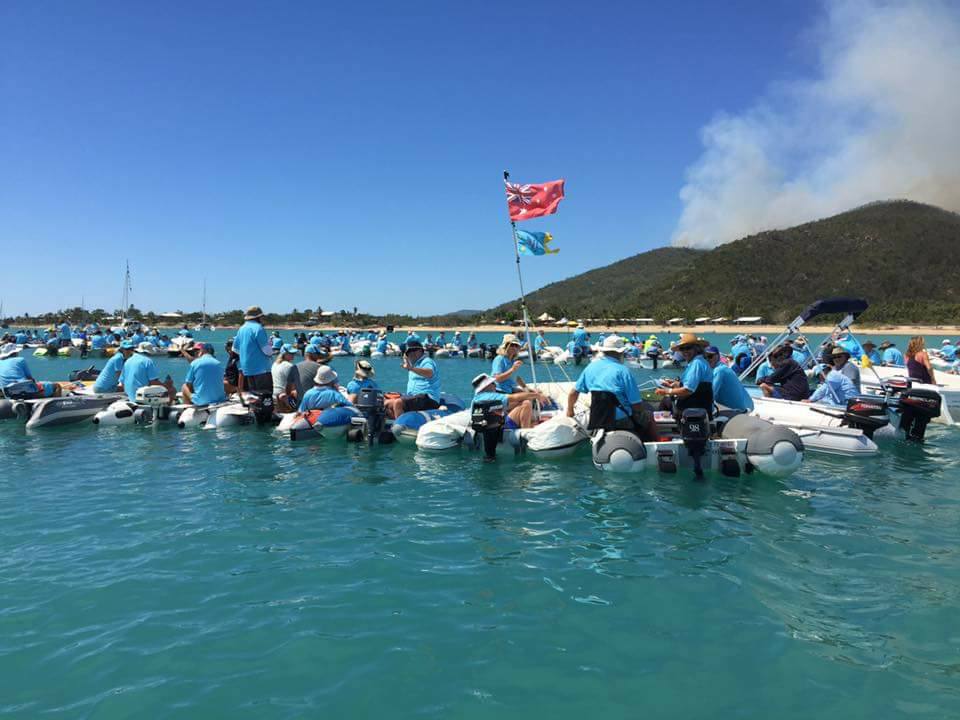 This weekend the Shag Islet Cruising Yacht Club will host their annual rendezvous in Gloucester Passage, Whitsundays, Queensland. With over 1000 boaties, all Vice Commodores of their own special part of the world, joined together for a weekend of festivities and to raise money for the Prostate Cancer Foundation of Australia.

Founded in 2009, the Shag Islet Cruising Yacht Club now has 5739 members from over 17 countries around the world. This not-for-profit organisation is the brain child of Ken & Rhonda Thackerey and was born with the intention of creating a social network for cruising yachties. Due to its popularity and rapid member expansion, this group of boaties then expanded their purpose to raise much-needed funds for prostate cancer research. In the last eight years, they have raised over $500,000 for the PCFA, with records figures of over $100,000 being predicted for this year’s event.

A significant activity at the 2017 SICYC Rendezvous is “HANDS ACROSS THE BLUE” for Prostate Cancer. This stunning spectacle took place in the shallows off the beach of Cape Gloucester Eco Resort on Saturday 26 August at 11am.

During this event attending yachties from 205 vessels gather in their dinghies on the water holding “hands across the Blue” in the shape of the Prostate Cancer Foundation of Australia (PCFA) logo.  The intention of this event is to create awareness of Prostate Cancer, and to establish this as an activity which may take place in boating, fishing, skiing and surfing communities each year on the last Saturday of August.

The rendezvous is made possible every year with the generous contributions of sponsors, major sponsors include Abell Point Marina, Oceanic Marine Risks, Quantam Sails, Charter Yachts Australia, Hogs Breath Café, Gold Coast City Marina and Fish D’vine. The special guest at the event this year was Hon Peter Dutton the Minister for Immigration and Border Protection. In addition to Peter Dutton, PCFA’s representative was distinguished professor Judith Clements AC. In 2015, Judith was awarded Companion of the Order of Australia on the Queen’s Birthday honours list, being recognised for her outstanding contribution to the field of biomedical research, particularly prostate cancer. Judith will be supported at the event by her colleague professor Adrian Herington. Other VIP guests, who enjoyed the ‘hands across the blue’ from the deck of the vessel MV Norseman were Mayor Andrew Wilcox, Jason Costigan MP, Paul Darrouzet (owner Abell Point Marina) and Ken & Rhonda Thackerey (SICYC Founders).

With 205 vessels in attendance this year, this four-day event was once again deemed a resounding success by members of the SICYC, some of which have travelled from overseas to participate in the event. The festivities included a ‘meet and greet’ featuring the Supreme Dreams, the Shag Islet island party, ‘What were you wearing when the boat went down’ themed party on the Saturday night with a superb fireworks display, as well as ‘pirate treasure’ – auctions/ raffles being distributed throughout the weekend, with the festivities wrapping up with a Pirate Party farewell lunch on Sunday.

Bringing like-minded boaties together in the paradise of the Whitsunday Islands, this popular event kept up to its promise of a vibrant, colorful four days of frivolity and fun for a great cause.