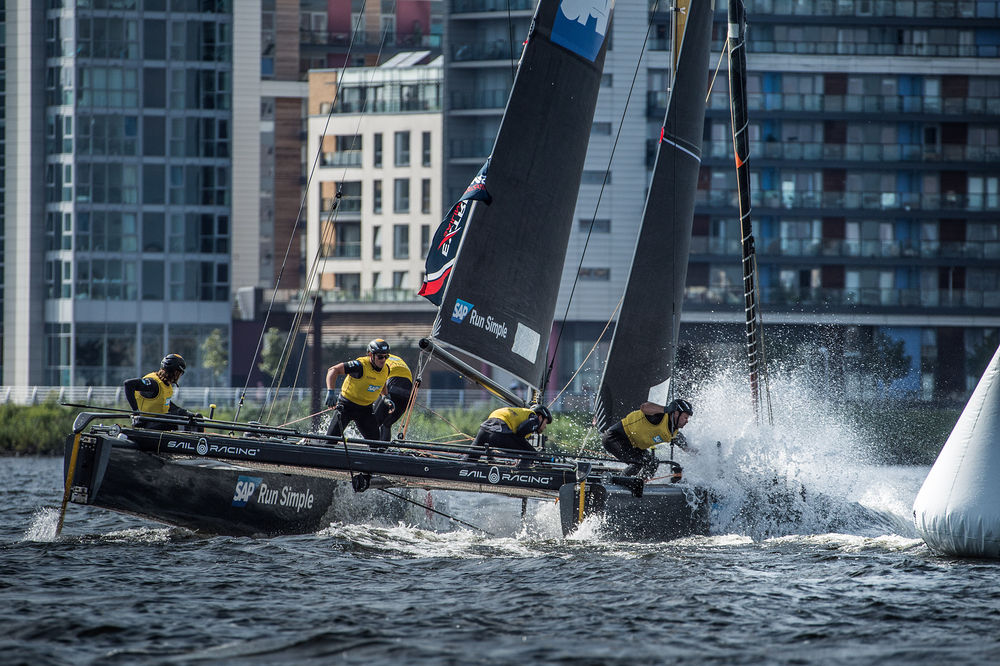 Four podium finishes, including two bullets, were enough for SAP Extreme Sailing Team to take the overnight lead on day two of the Extreme Sailing Series™ in Cardiff, but Alinghi is in hot pursuit.

The crowds packing the shores of Cardiff Bay were treated to sun and a spectacular foiling display from the international fleet of GC32s, as an unexpected breeze filled in just in time for the Stadium Racing in the Welsh capital.

“We're happy with the day. It's very difficult not to have a couple of races that are challenging but we only had one or two, so we're pretty happy with that,” said co-skipper and mainsail trimmer Rasmus Køstner.

“We have worked a lot on our starts and we came off the line really well today, and that makes a big difference,” added Køstner, whose Danish-flagged squad is tied on points with leader Oman Air on the season scoreboard.

“Today was great for us,” said Psarofaghis, who helmed his team to two wins but also suffered one last place blot on his scorecard. “We made a few mistakes that cost us a lot of points, but overall the day was really good for us and we're really happy with the way we sailed.

“Nothing has changed since the last Act in Hamburg, it just wasn't our regatta,” added Psarofaghis, whose team has had two bad results in the past two Acts, leaving it under pressure to perform in Cardiff.

Oman Air had a mixed bag, with only three podium finishes from the six races, including one win and one sixth place.

“Today was a bit of a horrid day for us, we didn't really gel and we didn't get the boat going in the right places,” said skipper Phil Robertson, whose team enters the second half of Act 6 in third, but with a troubling nine-point deficit on the leader.

“We sneaked a few good results in but when we weren't on the podium we were doing a lot of damage and that's not what you want to do, you want to keep it consistent,” he added.

Land Rover BAR Academy, who sits in sixth, celebrated its first win of the Act in race six, as it crossed the line to the sound of cheers from the crowds and with a mammoth lead on the rest of the pack.

“It came together nicely for us. To look back as you come across the finish line with that much of a lead is pretty epic,” said a delighted skipper, Rob Bunce, whose team welcomed Welsh rugby star and Land Rover UK Ambassador Leigh Halfpenny on board as a Guest Sailor in the opening race.

After 10 races in the Flying Phantom Series ZEPHYR by Idreva, crewed by Charles Hainneville and Antoine Rucard, still tops the standings but Red Bull Sailing Team is fighting back. Olympians Thomas Zajac and Will Ryan sailed the Austrian-flagged boat to three consecutive wins, moving from sixth to second out of the fleet of 13. Culture Foil drops from second to third.