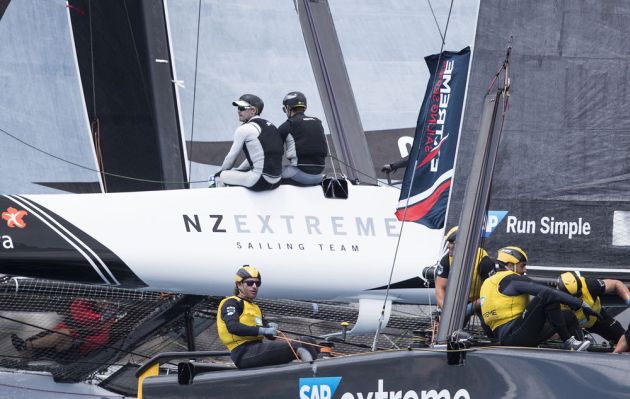 SAP Extreme Sailing Team took an early lead on the opening day of Extreme Sailing Series Act 3, as the international fleet of seven GC32s raced against the stunning backdrop of the Madeira Islands capital, Funchal, in front of a packed Race Village.

The day began with the official press conference, which saw a great turn out from both national and international media.

Following six races in shifty conditions, it was the Danish team that was able to narrowly secure the victory, but with NZ Extreme Sailing Team hot on its heels. The Kiwi syndicate had sat at the top of the leader board for most of the day, before being pipped to the post in the final race. SAP Extreme Sailing Team head into day two with a narrow two-point buffer.

“It felt like a really good day out on the water overall,” said SAP Extreme Sailing Team's helm Adam Minoprio, whose team pulled off a convincing comeback after a painful mistake in race one. “The first race we messed up massively as we misheard the course on the radio, and thought that we had two laps, but there was only one. We gave away a win in that race and had to take fourth, which is really frustrating as it's three points that could come back to hurt us on the last day.

“The rest of the day went really well for us. I'm really happy we were able to jump in, in those extremely tricky conditions, and be consistently at the top,” he added.

It was the Kiwi team's consistency that secured its second-place finish, with co-skipper and helm Chris Steele steering his team to five podium finishes, including one bullet, out of six races.

“We're pretty stoked with our first day. We had no real disasters, so we're happy,” said Steele. “It was pretty hectic as the breeze was really up and down and shifty. The starts were important and we had some good ones and some not so good ones, but there were plenty of passing lanes out there and the guys did a really good job of getting the boat round the track and picking the right sides of the course.”

Alinghi, who won the Act in the Portuguese venue last season, finish the day in third, a further eight points behind NZ Extreme Sailing Team.

“Today was not so good for us but we have three days to go and at times today we sailed really well,” said Arnaud Psarofaghis, co-skipper and helm of the Swiss team. “Everything is still on the table so we will see what happens tomorrow.”

Phil Robertson's Oman Air had a mixed bag of results, including two wins, and just missed out on the podium due to a disqualification from the final race. Red Bull Sailing Team finish the day in fifth, 12 points off leader SAP Extreme Sailing Team.

Despite a strong start for Land Rover BAR Academy, which opened with a second and a third consecutively, the British squad was unable to maintain its form. It followed up with three fifths and a seventh to finish in sixth overall.

The Brits finished ten points ahead of last-placed Team Extreme, the local wildcard entry. Despite the results, Portuguese skipper Mariana Lobato remains positive: “The team is pretty young and we are still trying to adapt to each other. I think we actually improved a lot today. It's great to see how we can learn from each other”

The day also marked the start of the 2017 Flying Phantom Series. The 12-strong fleet of international crews took to the water ahead of the GC32 Stadium Racing to kick off the festival of foiling in Madeira.

The action resumes tomorrow, with the Flying Phantom Series scheduled for a 10:00 UTC+1 start, followed by GC32 Stadium Racing from 14:00 – 17:00 UTC+1. Keep an eye on the official social media channels for regular updates and follow the racing via the live blog.