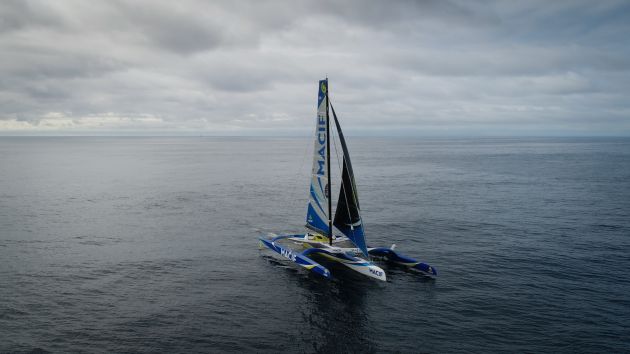 On the third day at sea, the MACIF trimaran is leading The Bridge fleet, followed by IDEC Sport, who clocked in just twenty miles behind. There is still a long way to go for François Gabart and his crew. They are expecting a close-hauled crossing littered with the traps of small transitions. The atmosphere on board is as good as ever, as the skipper explained this Wednesday morning.

How did the start of The Bridge go in St. Nazaire?

François Gabart: “It was difficult to sail out of the channel because there was very little breeze. On top of that it was not in the usual direction, as it was coming in. So, we had to tack with our J1, our largest flat sail, which is very good for manoeuvring. The sailing wasn’t up to scratch as we left the channel, but it didn’t really matter, because the line start went well and as soon as we got out, we got our bearings and began some very nice manoeuvring. Anyway, I’m sure it was quite a show, what with the Queen Mary 2 and the A380. We’ll have to wait until we’re back on shore to see the wonderful photos and videos taken, since we were focussed on sailing.”

How did the first day go in calm seas? Considering your distance from Sodebo and Actual, was it strategically significant leave in the lead?

FG: “It didn’t really cross our minds that there would be gaps from the start, but we were motivated to keep hard at it. We left close-hauled in very light air and we successfully wove our way along the Breton coast grazing the rocks on the first night. We succeeded in widening the gap as we approached the first small ridge of high pressure. These gaps quickly turned into larger ones.”

You’ve just completed a long starboard tack on a reach. Do you think this will be the fastest tack on this crossing, considering what’s ahead of you?

FG: “Yes, we did make quick progress on a starboard tack during the night, but our top speeds were when we sailed towards the low-pressure area off the coast of Ireland on a port tack. When we go looking for wind changes, we’re happy to work a little harder at the helm, since it means we accelerate. Most of the time has been reaching and close-hauled with a wind direction that is rarely beyond 90 degrees. But it’s quite surprising, because our boats are fast at these speeds. They have made good progress in terms of performance. We use the foils on MACIF as soon as the wind rises above 20-22 knots, and we manage to maintain averages of over 30 knots, even when we’re hauling upwind.”

You are currently leading The Bridge with IDEC Sport hot on your heels. How are you handling this close battle?

FG: “We are making headway, but we are keeping an eye on them. Guillaume (Combescure) is looking at the ranking as I speak. There are plenty of transitions to handle between now and New York. The first will be near midday and another tougher one tomorrow morning. The weather models we have for these areas are imprecise. In fact, that was the case yesterday morning when we wanted to sail round a windless bubble. IDEC Sport went straight through! It’s difficult to have reliable forecasts, but, since we’re in the lead, we’re going to try not limit the gap to the side of IDEC Sport and to keep to the same areas, ideally within sight of each other, as we were on the first day in the high-pressure ridge, so that we don’t lose out stupidly, in relation to them, in these areas of transition.

Yann Riou said yesterday that he had to bring out the balaclava, boots and all-weather gear. What’s the weather like right now?

FG: “We installed ventilators in the cockpit at the start because of the heat wave in France. I have to say, we haven’t used them much! This might be because we chose the northern route, as you have noticed. I put my boots on for the first time this morning. We are now all wearing boots, all-weather gear and hats! It’s not very warm and it’s not going to get better, as we will be sailing a short distance from the ice, just short of 50 -100 miles from the icebergs. We’ll only take out the t-shirts again when we arrive in the region of New York.

How’s life on board the MACIF trimaran with six of you?

FG: “Great!” It took us a while to get our bearings, get used to the sensations, and to set the watches in motion. The crew is now working together really well. I love the atmosphere on board, it’s enjoyable and it gets results. I’m delighted with the crew.”

What do you plan next? Apparently, you’ll sail close-hauled?

FG: “Yes, we’ve a small slack transition, which we’re going to have to deal with today. Then we’re going to have to work with a succession of transitions, the largest being tomorrow morning. We’re going to be close-hauled right up until New York, between transitions and gales. The only small downwind area, and therefore the gennaker (largest foresail), we had was between the Scilly islands and Ireland. It looks like a cold transatlantic beating upwind. It’s not really what we like the most, but as I said, the boat behaves very well at these speeds.”