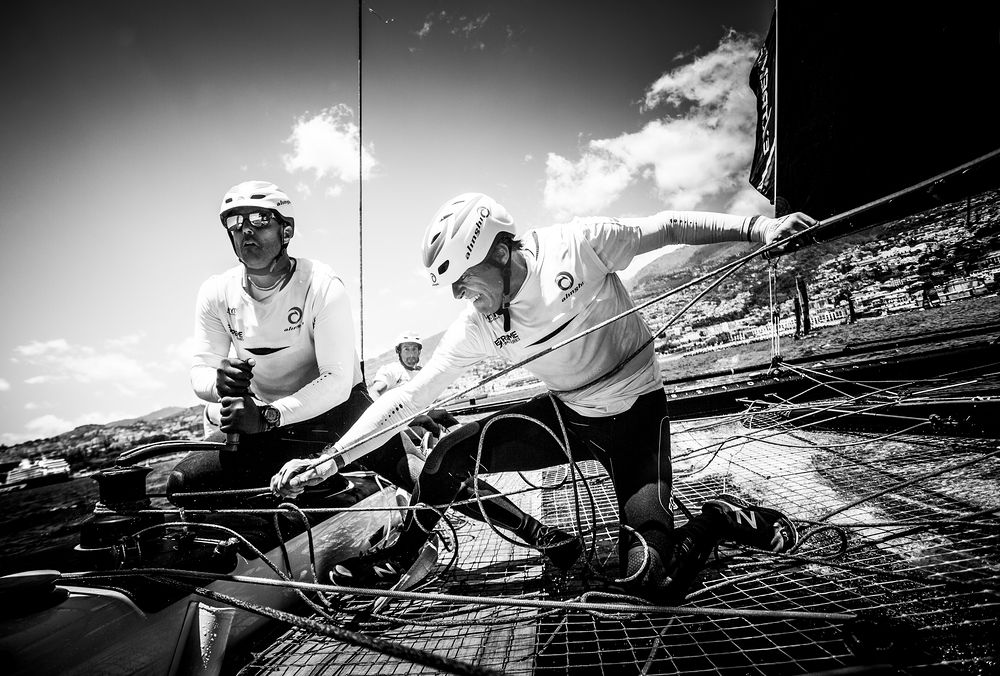 SAP Extreme Sailing Team continued its impressive podium-finishing form on the second day of Stadium Racing in Madeira, further extending its lead in the third Act of the 2017 Extreme Sailing Series™.

Just behind them in the overall standings but sailing equally impressively was Phil Robertson's Oman Air, which really hit its stride in perfect foiling conditions off Funchal, finishing first or second in each of the last six races.

With Adam Minoprio doing the driving, SAP Extreme Sailing Team had to produce dynamite of their own to stay in front, with the Danish-flagged GC32 streaking away with six podiums altogether, including three race wins.

“It's tricky out there but I think we definitely had some good races. Then it's about trying to fight your way back in the ones where you miss the start or find yourselves a little bit lower in the fleet,” said co-skipper and tactician, Rasmus Køstner.

A fifth in the final race was the only blot on the scorecard for SAP Extreme Sailing Team, and Køstner is keen to figure out where it went wrong: “I think we started the day pretty well, but we're not too happy with how we finished.

“We're going to go away and take a good look at the SAP Sailing Analytics and see how we can get the later part of the day right.”

After a slow start, Robertson and the boys on Oman Air had one of those dream days when everything they tried came off just as they wanted. The Omani syndicate matched SAP Extreme Sailing Team's tally of wins and podiums but, with a big points gap going into the day, they still have work to do to catch the leaders.

“We had a really good afternoon, managing to pull it together towards the end,” said a thrilled Robertson. “We managed to put a string of good races together and we got some more points, and that's what's important at this stage of the regatta.”

In the points ranking, Oman Air spent the day fighting with the Swiss team, Alinghi, for second place and the two crews went into the final race just one point apart. A win for the Omani team meant the Swiss had to settle for third.

“The racing was good and the conditions were perfect and we could foil, which is great,” said co-skipper and helm Arnaud Psarofaghis.

“The overall picture of the results is good but we are not happy with the way that we were starting. We were catching up really nicely, but we didn't start well at all today, so we need to improve that for tomorrow.”

Despite a strong start, NZ Extreme Sailing Team's form went from bad to worse as it lost its mainsail in race nine, and struggled to recover.

“We had a couple of podiums early on, then we had a gear failure on the main halyard. We were going around the bottom mark and the main just fell from the sky,” explained co-skipper and helm, Chris Steele.

“That kind of set the tone, and in the next race we lost a gennaker block, which meant we couldn't really gybe – it was a bit of a snowball effect from then on. We didn't bounce back that well but we'll be back tomorrow,” added Steele, whose team drop from second to fourth.

Austrian-flagged Red Bull Sailing Team had another mixed bag, and finished tied with the Kiwis in fifth place, while British-flagged Land Rover BAR Academy struggled once again to find its form, never finishing higher than fifth in any race.

Local wildcard entry Team Extreme bagged its best result of the regatta so far in the final race, coming in second, to the delight of the crowds in the Race Village in Funchal.

The Flying Phantom Series once again opened proceedings, ahead of the GC32 Stadium Racing, with four races in a steady breeze. Austrian-flagged Red Bull remains in the top spot with a healthy lead, while ZEPHIR by Idrewa climbs one place to second. Culture Foil leapfrogs Cup Legend to take third.