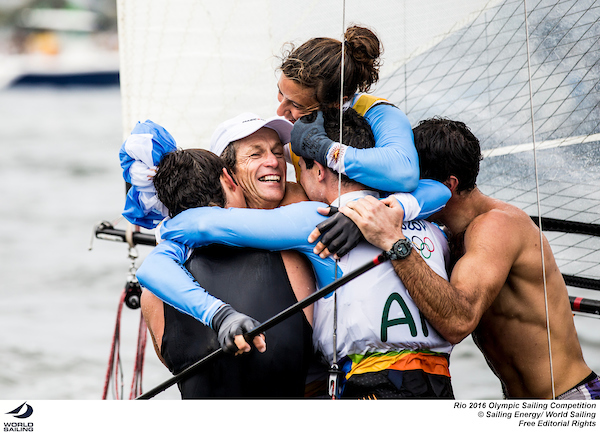 Sante Lange is mobbed by his family

In our excitement at the amazing performance of Jason Waterhouse and Lisa Darmanin to bounce back from an awful final day of qualifying in the Nacra 17 at Rio 2017, to win Silver after starting in fourth place, we probably didn't give enough credit to Santiago Lange, the 54-year-old helm of the Argentine multihull.

Andy Rice from World Sailing wrote this about the great man:

The Argentineans made hard work of the Medal Race, picking up a penalty early on to round the first mark at the back. But, they fought back to third by the top of the final lap, only to incur another penalty for sailing too close to the Austrians. After dropping the gennaker and taking their 360 penalty turn, Lange and Saroli rallied to cross the finish in sixth place, just seven seconds ahead of the Italian team.

It was a crucial seven seconds that gave gold to Argentina by a single point from Australia. The young Aussies crossed the finish behind the New Zealand team of Gemma Jones and Jason Saunders (NZL), but more importantly finished ten seconds ahead of the Austrians who crossed for third place. Australia and Austria were tied on points, but silver goes to Waterhouse and Darmanin for their superior finish in the Medal Race.

Looking back at that extraordinary race, Lange commented, “We started the Medal Race with an unfair penalty because the British didn't give us room to dodge the Australians. It was hard but we have sailed here many times since November when we came to live here. The wind was unstable, I saw it and I was quite sure how to do things, others were wrong. We sailed an incredible race.”

It has been an extraordinary Games for Lange, at 54 the oldest competitor in the sailing competition at Rio 2016. He has had the pleasure of watching his sons, Yago and Klaus, represent the nation in the 49er skiff, and he has survived cancer in the past year.

Lange says the rigours of his sport helped to save his life and return to competition after he lost half a lung to cancer just a year ago. His hectic schedule led to diagnosis of the disease, he said, while the experience of five Olympic campaigns, winning two medals along the way, was key in keeping him positive through his ordeal and returning for a sixth challenge.

Lange, with crewmate Carlos Espinola, won bronzes for Argentina at Athens 2004 and Beijing 2008 in the now discontinued two-person Tornado class event before combining with Cecilie Saroli in 2014 in the Nacra 17 mixed class, a new addition to the Olympic sailing schedule at the Rio 2016 Olympic Games.

Plans were suddenly placed on hold in 2015 when Lange was diagnosed with cancer and eventually he had half his left lung removed. “The six months I was dealing with that, I was so positive,” Lange said. “Now when I look back it was a good experience, difficult, but I learned a lot. I was operated on in Barcelona and after five days I was cycling, in a month I was back sailing.”

Lange was reluctant to dwell too much on his cancer episode. “This may help to give strength to many people who are going through what I've been through. But I prefer to focus on what we did athletically. The disease has nothing to do with it, it was a stone in the road. I became obsessed with getting to Rio very well prepared and we did.”

He was also reluctant to focus on his age. “I am a firm believer that you carry your age in your heart and in the desire to do things, not in the numbers. I do not look at the number of your age, only the desire I have for my goals and to achieve them.”

In the media interview after the event, Lange spoke about the moment when they realised the Gold medal was in doubt.

“Cecilia said to me, 'Come on old man, find some magic' and we did, we found the magic.”