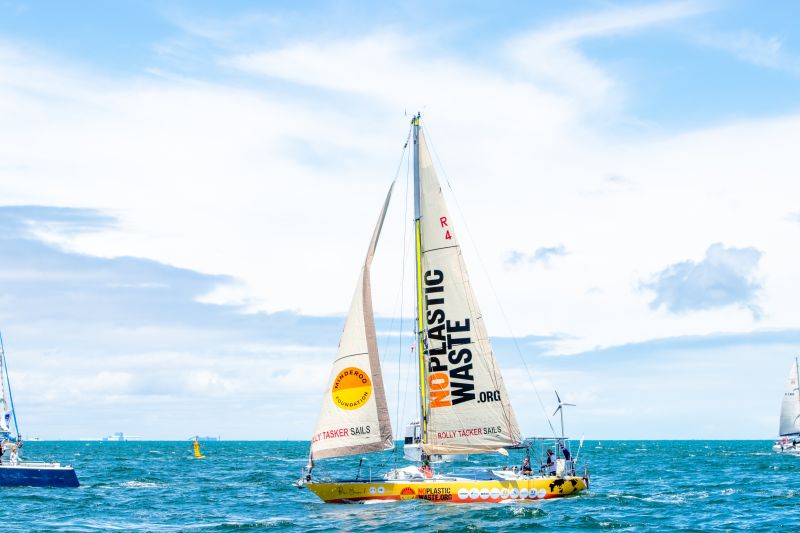 During his 14 month voyage, Jon experienced some of the worst ocean conditions in decades, which knocked out his communications on two of the legs. But before leaving Fremantle in November 2019 Jon’s team linked his on board satellite tracker with the Nebo boat logging app, providing a position update every five minutes even in the most remote stretches of ocean.

Sanders Team Manager Dr Stephen Davis said the Nebo system had been an invaluable aid for Jon’s support crew, enabling them to know the 81-year-old sailor’s position every step of the way on his historic 11th circumnavigation of the world. “We lost all voice communication with Jon during his first major storm off the coast of South Africa when winds exceeded 120km/hr,” Dr Davis said.

“Through the night we followed Jon on Nebo watching his every change of direction, which told us his tactics in facing the extreme conditions. This was to be repeated twice between Tahiti and Australia when severe weather conditions saw Jon circling to keep the bow into the storm.”

The ferocity of the storms forced Sanders to sail with a bare mast, dragging a tyre as a sea-anchor, in an attempt to keep the boat facing into the wind and waves. “Nebo showed us exactly what was happening and we knew precisely where Jon was located,” he said.

“We were able to match sea and wind conditions with that location to understand Jon’s situation and act accordingly.”

Dr Davis said Nebo had also allowed people all over the world to follow Jon’s progress 24 hours a day and become part of his voyage to raise awareness of plastic pollution – one of the greatest health and environmental threats facing our planet.

Nebo was created by Perth geologist Stephen Winter, who spent many years developing geospatial software and cloud-based information systems. After selling his business in 2012 Mr Winter swapped mining for time on the water aboard Saratoga, his classic timber motor cruiser.

“Like many boaters, I wanted to keep an accurate log of our voyages, but the dog-eared notebook was doomed to fail,” Mr Winter, Nebo’s Managing Director, said. “I knew it would be possible to collect all of the data required for an effective log completely automatically, and that’s how Nebo came about.”

Key to Nebo, but hidden from users, is a database of maritime geofences (or virtual perimeters) defining locations such as bays, marinas, rivers and ports. In a mammoth effort, the Nebo team has digitised many tens of thousands of geofences around the world. When a vessel crosses a (virtual) geofence boundary, the event is registered by Nebo and used to compile the automated log.

Launched in 2017, Nebo now has around 22,000 registered users, most of whom are recreational boaters based in the United States of America. They’re aiming to reach 500,000 users within the coming years, and for Nebo to become part of every boater’s standard kit.

Mr Winter said early versions of Nebo were extensively tested by the world’s leading sailing holiday company Sunsail on its charter fleet in Croatia. “We learnt many lessons on the Adriatic, in particular that mobile phones aren’t 100 per cent foolproof or reliable, and that users would often forget to start and stop logging their voyages.

“Now our users can get the optional Nebo Tracker, a cellular GPS device that logs every movement of the boat. That’s also great for safety, which is on every boater’s mind, and most definitely on the minds of their loved-ones at home.”

While not replacing an EPIRB (emergency locator beacon) or other safety systems, the Nebo Tracker provides a feed of highly detailed spatial information that helps locate a boat requiring assistance. Even if the EPIRB isn’t activated, Nebo has the vessel’s track available if required.

“Enhanced safety for solo circumnavigators and weekend boaties is a clear benefit of the system, but we recognised early on that Nebo is also great for keeping in touch and building communities on the water,” Mr Winter said.

“Users can share their voyage log with family and friends, members of their club or with the broader community via social media.

The app is free to download. Users can also purchase a Nebo Tracker and monthly subscription which enables fully automated voyage logging, notifications whenever a boat moves on water or on land, and the ability to connect with other boat users across the globe.