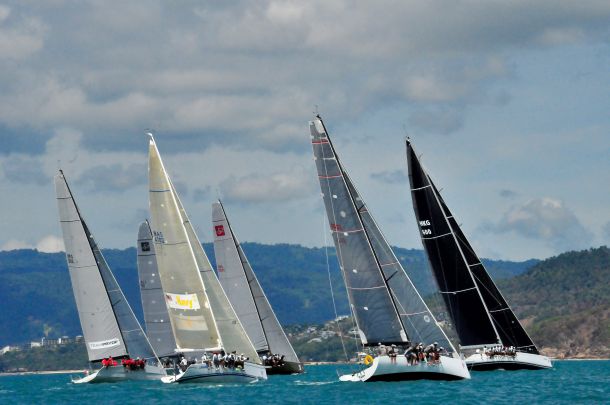 SAMUI, Thailand – Asia's top yachts have come together at the Thai tropical island of Samui to battle it out for the 14th Samui Regatta honours – the curtain-closing event of the 2014/15 Asian Yachting Grand Prix championship. Held 23rd to 30th May off Chaweng Beach, Samui Regatta comprises five days of racing in the tropics with six nights of beachside parties.

The high calibre fleet includes many of Asia's best. Some tight racing is expected in IRC 0 with Jelik (HKG), FreeFire (HKG), Oi! (AUS) and the former HiFi, Windsikher 2 (SIN), battling it out whilst the Regatta welcomes back a Premier Class after a few years hiatus with El Coyote (AUS), Lawana (THA), Uranus (MAS) and the all-new Spirit 65 (GBR) named Chloe Giselle headlining the class.

New to the Asian circuit, Chloe Giselle was the first Spirit 65 out of the UK shipyard and shipped to Asia to compete in the regional circuit. Designed as a performance orientated sailing sloop that combines classic lines with the use of modern materials and construction technology, the Spirit 65’ will be one to watch.

“The fleet is looking to be competitive and we are aware of some more boats that have not yet entered but will sail in for registration this weekend and join in the fun,” said Mr. Simon James, Race Director, Samui Regatta.

“Depending on final entries, we are considering dual scoring the IRC 2 class and possibly also the Premier Class with IRC and a performance-based handicap. This should prove interesting for the sailors and will keep them on their toes through some fair and competitive racing.”

The action onshore is expected to be equally frantic and fun.

Organisers have brought back the mid-week party which will be Hawaiian-themed and at KC Beach Club on Wednesday 27th May, allowing the sailors to let off some steam and relax the following day, which is the Reserve Day. On-the-beach prize-presentations take place each day after racing while the official Opening Party is at Zico's Brazilian Restaurant & Bar on Sunday 24th May and the final party, prize-presentations and Gala Dinner is hosted by Centara Grand Beach Resort Samui on the resort's lawns under the stars on Saturday 30th May.

The full event schedule can be viewed at http://www.samuiregatta.com/new-to-samui/schedule.

“For some, the onshore part of the Regatta is almost as important as what happens on-the-water and this year the local support from Samui businesses has been overwhelming. A number of new resorts have offered their support, we welcome back many long-term supporters and are excited to be working with Nikki Beach again. The Regatta has really become a true community event. Making the sailors stay refreshed, we will be serving Mount Gay Rum, Finca de Malpica wine and Asahi beer, and for the first time there will be Samui Regatta Signature Cocktails at the parties.”

For those who wish to get a taste of the action, Serenity Yachting are offering a spectator experience, where their catamaran will be positioned at the startline to watch the start action every day. Tickets are available at 800THB per person and pick-up and drop-offs are on Chaweng Beach in front of Centara Grand Beach Resort Samui. Food and drinks can be bought onboard. Contact Anna Figaro on t: 0 99 196 3889 to book.

The Samui Regatta will take place 23rd to 30th May 2015, headquartered at Centara Grand Beach Resort Samui, and is organised by Regattas Asia in conjunction with the Samui Yacht Club Regatta, under the auspices of the Yacht Racing Association of Thailand, the Municipal of Koh Samui and the Sports Authority of Thailand.