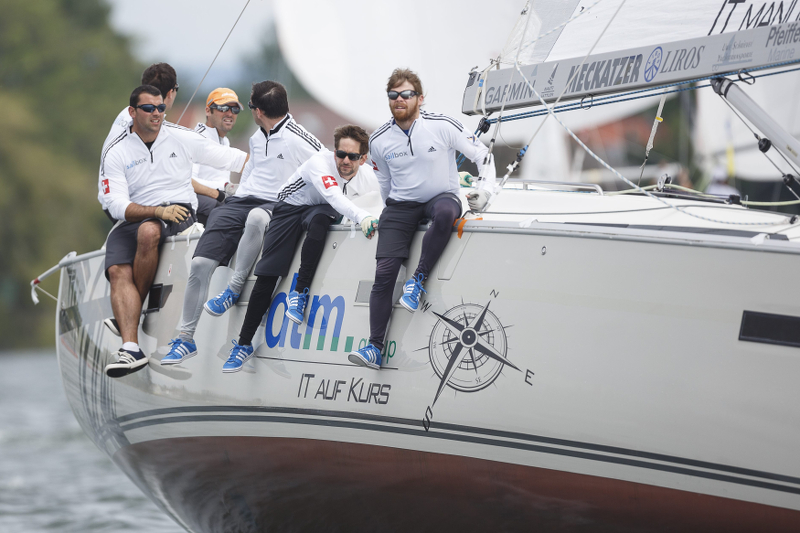 Monnin, an experienced lake racer and Tour Card skipper for the 2015/16 season, posted a swift 3-0 score-line over fellow Tour Card Skipper Joachim Aschenbrenner from Denmark. The disappointed Dane, keen to put early points on the World Championship leader board from this event, was unable to shake off Monnin and his experienced Team SailBox who earlier today also posted a straight 3-0 score-line in the Quarter Finals against Mark Lees, GBR;

“The day went well for us,” said Monnin arriving back on the dock. “The matches were a lot closer than they looked at the finish, we also had an unfortunate contact situation with Aschenbrenner, something we really try to avoid in these boats. He made a mistake (at least that’s how we judged it) and after he received a one-point penalty for causing damage, we were feeling a bit on edge. In any event, a good result for us today, tomorrow will be more important.”

In the second semi-finals, 22yr old Matt Jerwood from Australia, competing in his first World Match Racing Tour event, won his first two races against event favourite Basic. Jerwood needed just one more race to secure their place in the finals. But Basic was not going quietly levelling the score at 2-2, with a ‘winner take all’ race for the final.

Following a boat pair swap requested by Jerwood, both teams built good pace off the startline with Basic to windward as they headed towards the harbour pier. Basic waited until the last moment to tack just metres from the pier, forcing Jerwood to tack second and trail Basic to the top mark. As Basic pulled away downwind, Jerwood was unable to close the gap and Basic led to the finish securing his place against Monnin in the Final.

“Although we lost the first two races, we were also learning from our mistakes,” added Basic. “So when we started the third race, we felt in a better position. We are very pleased with our result at the end of the day and we look forward to the Final.”

Monnin and Basic will meet in the Finals of the 18th edition of Match Race Germany starting tomorrow with light wind conditions forecast.