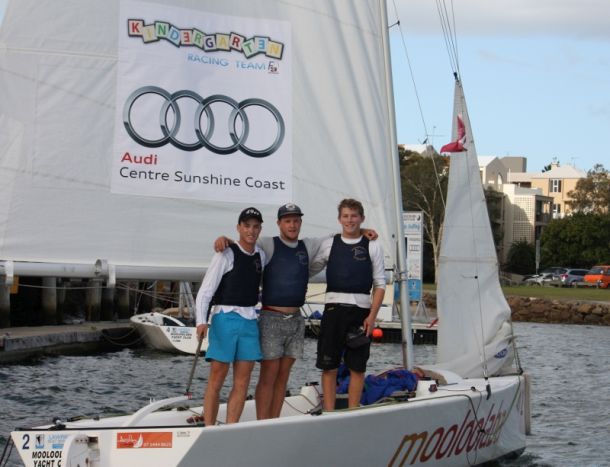 The final battle of the Australian Youth Match Racing Championship being conducted by Mooloolaba Yacht Club, came down to state versus state. In the blue corner was Cruising Yacht Club of Australia’s Harry Price, Murray Jones and Ben Robinson. In the maroon corner was Royal Queensland Yacht Squadron’s Charlie Wyatt, Alex Gough and Klaus Lorenz.

While one of Australia’s highest profile football matches is still half a week away, the New South Wales and Queensland youth sailing teams did their best to set the scene for that Rugby League match. Price and his NSW blue team came out on top taking out the 2015 title.

Price’s team found themselves in the Final up against Wyatt’s team after beating Sandringham Yacht Club’s James Sly, Tom Dwyer and Ed James in the Semi Final, where they lost the first match, but then went on to win the next two.

By the time the Final match has started the wind had softened and gone left. The short course on the river at Mooloolaba soon become very challenging for both teams who had just spent the previous two competition days racing in strong to very strong conditions.

Price came out of the two Round Robins with a confident top place. He then found himself up against a cunning competitor in Wyatt who had slowly found his form through his steady progression into the Final series.

The first race of the Final went to Wyatt who picked a shift near the top mark late in the race to slip ahead of Price and lead across the finish line.

“It wasn’t about how good a team was, it was just whether you could capitalise off the start by punishing the other team beforehand,” Price said at the end of the regatta. “And then just continuing to do as much as you could to get around the course as fast as possible because it was that shifty, up and down pressure, and it was tricky.

“The course was short; three laps with nine minute races. I was okay with it but I am sure the boys were a bit puffed out by the end of it. It was interesting. It was nice and close and very intense,” the elated winner added.

Price and his team stepped up the pace in the next three matches to win each one cleanly, securing their first Australian Youth Match Racing title.

In the Petite Final the combined Noosa Yacht & Rowing Club / Mooloolaba Yacht Club team of James Hodgson and his crew of Hayden Johnson and Ben Vercoe won both their matches against Sly to finish in third place overall.

For the full results of the 2015 Australian Youth Match Racing Championship, go http://www.sailmooloolaba.com/match-racing1.html.