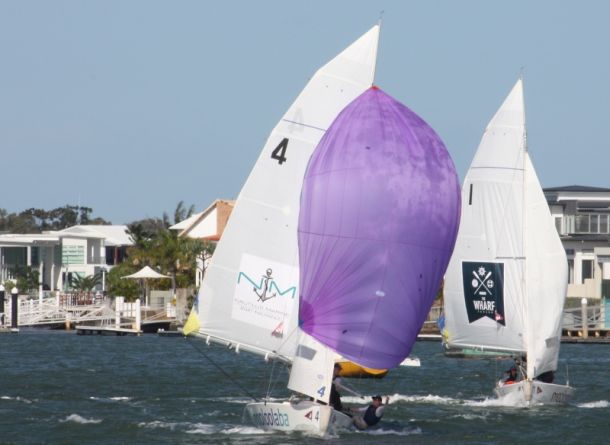 It was hard day on the water for the sailors competing in day two of the Australian Youth Match Racing Championship being conducted by Mooloolaba Yacht Club.

After stopping short of completing Round Robin 2 yesterday due to the fading light and with a high wind forecast for day two, the six youth teams and the volunteer race management committee approached today with caution. Catching the start of the building breeze PRO Warren Myles sent the teams out to ensure the Round Robin 2 was finished. The 16 to 18 knots gusting to mid-20s south-wester pumped in and the sailors were kept on their toes throughout the three-lap matches.

The second match was between Sandringham Yacht Club’s James Sly, Tom Dwyer and Ed James up against Royal Queensland Yacht Squadron’s Charlie Wyatt, Alex Gough and Klaus Lorenz. Both teams were assured of a top four place so the game was about who could psych who out first. Wyatt stepped up to handle the wind and race pressure to take out the match win.

With the pressure on its way up and the PRO forced to move the course to achieve a fairer downwind leg, the final match of the day was guaranteed to be a fiery battle between the two Cruising Yacht Club of Australia teams; series leader Harry Price with Murray Jones and Ben Robinson up against Caitlin Tames with crew Angus Williams and Vardon Robinson. Tames was determined to use the hard lessons from day one to help her improve her overall placing, but she struggled in the heavy conditions. Price pushed his crew and the Elliott 6 to the limit to cleanly lead the match and take out the win.

Myles then called a halt to the racing while he assessed the building conditions. “We had to delay the start of the final match as the gusts were up in the 30s. Once it got back down to the 18s again we completed that race. Race management then decide to postpone the racing as the conditions weren’t safe enough for the competitors to complete racing and the risk was quite high for damage to boats and crews,” Myles said.

The racing was then postponed for the day as the conditions are expected to be better tomorrow for the final day of the event. The tired and relieved youth sailors happily headed off for an afternoon of rest while the race management team went to work on dealing with the day's gear damage.

At the end of Round Robin 2, the overall placings were Price with nine wins, Hodgson with seven, Wyatt and Sly with six, Tames with two and Vercoe with no wins.

The draw for the Semi Finals is for Price to race Sly while Hodgson will race Wyatt in the best of two from three matches. The two winning skippers from the Semi Finals will go into the five match Final.

Racing starts at about 9.30am tomorrow morning. The forecast is for a south, to south-easterly 15 to 18 knots which will provide perfect racing conditions on the river at Mooloolaba for the final matches of the Australian Youth Match Racing Championship.