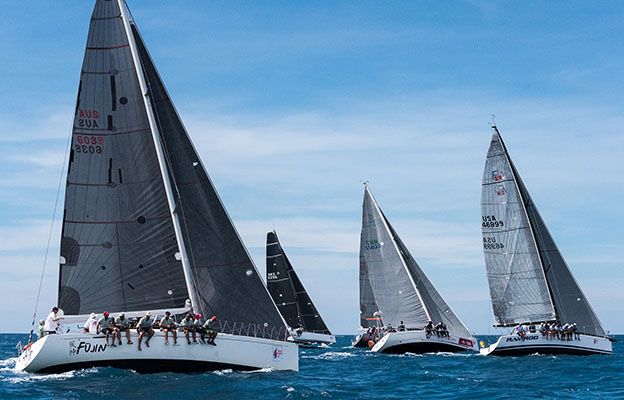 SAMUI, Thailand – Samui laid out the red carpet for sailors at the 2017 Samui Regatta today who, after a lively opening party last night at Zico's Brazilian Grill & Bar, complete with Brazilian dancers, were welcomed with a fresh 12 knots and sunny skies on Day 1 off Chaweng Beach.

With the breeze holding steady all day, three windward/leewards were the order of play and Race Officer Ross Chisholm had all under starters orders and off on schedule. First up, IRC Zero.

The two TP52s Freefire and THA72 are up against the Custom Dibley 76-foot Jelik and the Ker 46 Zannekin in IRC Zero – a small, but competitive class – and at the end of Race 1 three minutes separated all on corrected time. Looking to defend their title, Kevin Whitcraft's THA72 got off to the perfect start with a win in the first race ahead of Sam Chan's Freefire who claimed second place just 32 seconds ahead of the fast finishing Zannekin skippered by Marcel Liedts. While Frank Pong's Jelik were first across the line they could not convert it to a podium finish and had to settle for fourth in the first race of the series.

Winning margins were narrowed in Race 2 as Zannekin leap-frogged Freefire and finished less than a minute behind THA72 on corrected time who's impressive boat speed saw them push Jelik on-the-water.

Positions stayed the same in Race 3 with THA72 going one better and claiming line honours also, and comfortably lead the standings at the end of Day 1.

It's set to be a close week of racing for the seven “fast forties” on the IRC One startline, including 2015/16 and 2016/17 AsianYachting Grand Prix yacht of the year, Black Baza. First blood, however, went to the well campaigned Beneteau 44.7 Fujin, now in the hands of Gary Baguley, and with less than two minutes separating the top six on corrected time it was the Singapore-based Loco skippered by David Dimmock that secured second, 12 seconds ahead of Anthony Root's Black Baza in Race 1.

The big mover in Race 2 was the Ketelby/ Sorenson/ Brown/ Douglas Farr 40 Ramrod who, with Steve McConaghy onboard, raced into third ahead of the rapidly improving all Chinese crew on the Beneteau First 40.7, Ocean Knight. At the top of the standings, Fujin claimed a second bullet and Loco again placed second.

Mandrake III hit the pace in the final race and converted a second across the line into their first handicap win of the series. Black Baza held onto second, just five seconds ahead of Loco and Loco leads the standings at the end of Day 1.

Chris Mitchell's Naut 40 Lady Bubbly has shaken the Asian sailing scene this season, at one point challenging for the AsianYachting Grand Prix title. While looking like they will place third at worst, at Samui Regatta they got off to a flying start today with three bullets ahead of with Tim McMahon's SailQuest Hi Jinks who had to settle for a trio of second places.

After a few years hiatus, the multihulls have returned this year with two Corsair Pulse 600s battling it out over the five day series – Pixalux, skippered by Mick Tilden, and Multihull Solutions H30, skippered by Nut Khawmuang – and it was the Thai crew on Multihull Solutions H30 who took an early series lead with three bullets on the opening day.