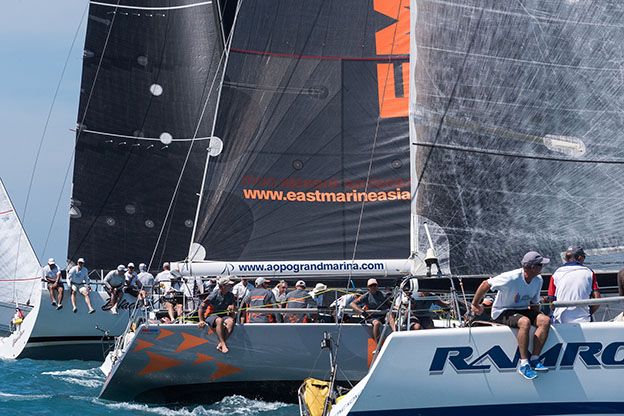 The racing in IRC One is extremely close. Day 2

SAMUI, Thailand – With the winds off Chaweng Beach looking a little light this morning the Race Officer laid the startline off the northeastern tip of Samui Island and set racing in the channel between the north shore and neighbouring Pha Ngan Island. With a solid 12 knots arriving on cue, sailors doubled down for an exciting Day 2.

The Cruising class stretched their legs over a 26nm passage race, while the IRC and Multihull classes completed a windward/leeward first before being sent chasing the cruisers through the northern channel, and with come classes completing five races by the end of the day, the drop race came into play. On Day 2!

Showing their superior boat speed whatever the course, Kevin and Tom Whitcraft's THA72 added two more wins to their tally today and with it stamp their dominance on the IRC Zero class. While they're running clear of the field with an undefeated scorecard to date, there's still plenty to play for between the others in the class as the finish times remain close.

Sam Chan's Freefire sprung back to form today with two convincing second places and with that overtake Zannekin, skippered by Marcel Liedts, in the standings to sit second overall.

Just seconds off the podium in the first race, Frank Pong and his crew on Jelik revelled in the longer second race, taking advantage of their superior waterline length and going on to record their first podium of the series, a third on handicap and a clear line honours by more than six minutes.

Looking to improve on his second place in yesterday's final race, Anthony Root and crew on Black Baza put their first bullet on the board today with a win in Race 1. Edging out Fujin by just 11 seconds, one minute separated the top six, underscoring how close the racing in IRC One is – a hallmark of Samui Regatta.

Shaking up things in Race 2 was David Dimmock's Club Swan 42 who claimed their first bullet of the series. With the discard now in play, a third place for Fujin was enough to move them to the top of the standings, one point clear of Loco, and following a retirement from Black Baza in the second race they sit fourth overall, two points behind Nick Burns/Fred Kinmonth's Sydney GTS 43 Mandrake III in third.

The Thai crew on Multihull Solutions H3O, skippered by Nut Thongtoam, has so far been unbeatable and was again today – two more wins gives them a clean sheet so far and a five point lead over Mick Tilden's Pixalux.

Hosted by Centara Grand Beach Resort Samui for the 16th consecutive year, the regatta is organised by Regattas Asia in conjunction with the Samui Yacht Club Regatta, under the auspices of the Yacht Racing Association of Thailand, the Municipal of Koh Samui and the Sports Authority of Thailand. Racing continues tomorrow off Chaweng Beach.