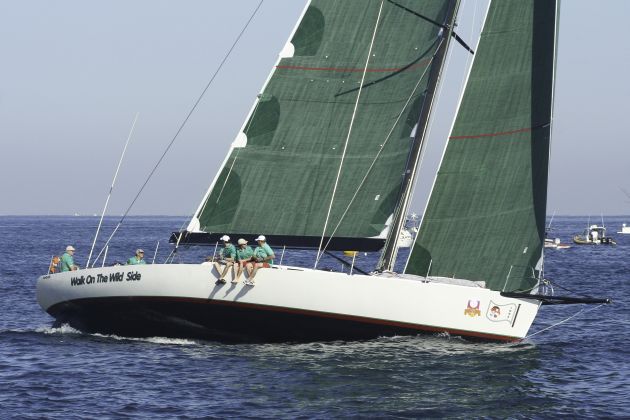 Walk on the Wild Side at the start. Photo Reimi Newman..

At a glittering but low key presentation last night, Garth Curran’s 58 foot Inglis-designed flyer Walk on the Wild Side took all three major prizes in the Racing Division – Line honours, first place IRC and first place YAH. In the process, Wild Side posted the third fastest time in the history of the event, a remarkable achievement for this 30-year-old grand lady of the West Coast and a tribute to her dedicated crew, which once again was bolstered by the addition of New Zealand sail maker Rod Keenan.

Minor places on IRC went to the double-handed entry Kraken, a Jeanneau Sunfast 3600 sailed by Todd Giraudo and David “Dubbo” White and Mike Giles’ Endorfin, a Sydney 47 which returned to the water very recently after an extensive refit.

On YAH the placings went to Max Palleschi’s Farr40IOR, Prime Factor, with Bill Henson’s Circa in third place.

Rally line honours were taken by Craig and Janette Hansen’s Buizen52 Napea, which took advantage of her superior diesel power to keep pace with the leading race boats, except for Wild Side.

In a surprise result, the Rally points score trophy was won by the 58 foot Bowman ketch Toroa IV, sailed by Paul Schapper. Using just 3.5 hours of motoring time, the big yacht was still able to maintain her predicted ETA’s at various points along the route to score heavily. Runner up Kondili, a colourful Hanse495 sailed by Josh Hearse with parents Phil and Robbie in the crew, scored well in several categories, but was unable to overcome Toroa’s motoring allowance. Third was Napea, which like Kondili, also submitted some creative video covering their adventures.

The navigator’s trophy was won by Joe Czeschka of Sadiqi Ra, the boat which also won the endurance award for the most time spent at sea.

This year’s race and rally was run by Fremantle Sailing club without a major sponsor, yet was one of the most enjoyable on record. The camaraderie among crews after arrival in Bali was superb. The presentation function, supported by the Department of Tourism of the Republic of Indonesia was informal and relaxed, and the announcement of the next race in May 2020 was made at the conclusion of the evening.

With a three year lead time, East Coast yachtsmen should be able to confidently plan an itinerary which takes them to the West during the summer months, perhaps taking in a week to enjoy Busselton’s Geographe Bay Race Week in February, leaving time for final preparations for the 1440 mile voyage to Bali and the opportunity to cruise the fantastic Indonesian Archipelago afterwards.