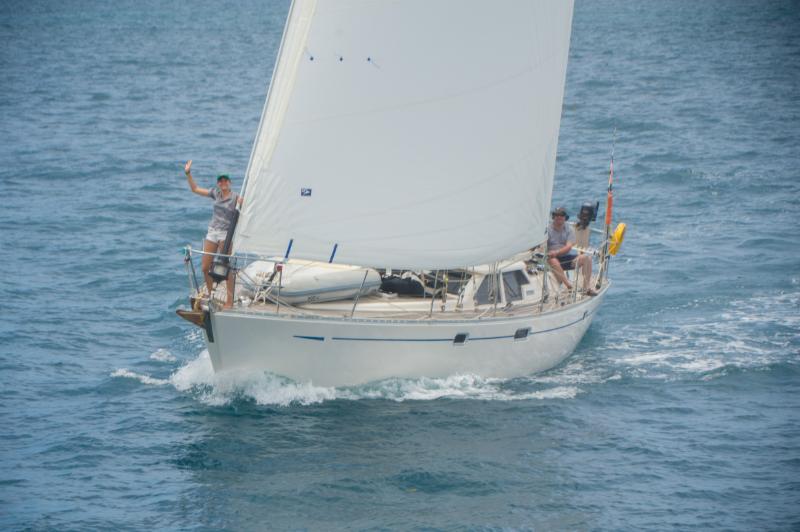 Hamilton, Bermuda: All teams racing in the Antigua Bermuda Race have now arrived in time for tonight's prize giving to be held at the Royal Bermuda Yacht Club.

Tim Wilson's Australian classic ketch El Oro, led the group of Corinthian teams that have refused to start their engines, showing tremendous tenacity in sticking to sail power only for over a 1,000 miles of light airs sailing.

El Oro crossed the finish line at St. David's Light shortly before 21:30 local time on Friday May 19th and in doing so claimed second place in CSA Classics and third in IRC.

Once owned by Baron Marcel Bich of America's Cup and BIC pen fame, El Oro and owner Tim Wilson painted a picture of their frustrating lack of wind in their last blog: Lost in the vortex!

“We’ve managed to point El Oro northwards 3 miles – cumulative in the last two watches. Pointed that is, not quite sailed. There is no wind. Read that as NO wind. Or maybe just enough to roll from side to side; about a metre forward for each roll.

“Our skipper tells us that at this rate another 10 watches will be required to complete our remaining 34.2 nautical miles to the finishing line. He has the numbers wrong. We are finally moving, about 1.5 knots in the right direction, 32.9 miles to go. Hold on. Brace yourself, 2.5 knots…

“It’s noon – land sighted. A good sighting, but six hours later we still have10 miles to go. Fridge is nearly empty of food. Now 2.5nm to go and a certain excitement. Two kites up, now Mizzen and main spinnakers. We can see the lights on the line. There are 14 people on deck. Bermuda La Fin! How good is this! No more miles, all smiles,” Wilson exclaims.

At around midnight last night, Jason and Judy Payne-James' Dufour 45, Heartbeat IV crossed the finish line in Bermuda. Their ship's log showed that the team of family and friends from the East Coast of England, had clocked up 1,007 nautical miles.

Co-skippered by President of the Royal Burnham Yacht Club, Judy Payne-James, Heartbeat IV has now competed in every well-known offshore race in the Northern Hemisphere. She has a berth at the Royal Bermuda Yacht Club for the duration of the America's Cup.

“They will be proudly waving the Union Jack and cheering on Ben Ainslie's Land Rover BAR team,” she said.

The final yacht to finish the Antigua Bermuda Race, entirely by sail-power alone, is Andrew Eddy's British Oyster 485, Gaia whose crew includes wife Sabrina and 19 year old niece, Phoebe Cochran. This is the first time Gaia and the Eddy's have been to Bermuda and they have raced here to watch the 35th America's Cup.

The Antigua Bermuda Race will honour the winners at tonight's Prize Giving Ceremony. However, the ethos of this race is not just about winning, it is about taking part, and throughout the race the stories told from Gaia's blog have been testament to that. Here is Gaia's final report:

“It has been a busy few days on board Gaia having been hit by a thunderstorm at 4am on Tuesday morning while flying our spinnaker: this resulted in some slick crew work, leading to a goose-winging opportunity for the next few hours.

“We've been visited by a plethora of blue-ocean bird life, including long-tailed Tropicbirds, Pomarine Jaegers and South Polar Skuas.

“The crew have been busy practicing their knot-work, with many turksheads and monkeys fists appearing round the boat. However their discipline has been slipping as poor laundry etiquette has been punished by unmentionables flying from the right spreader!”