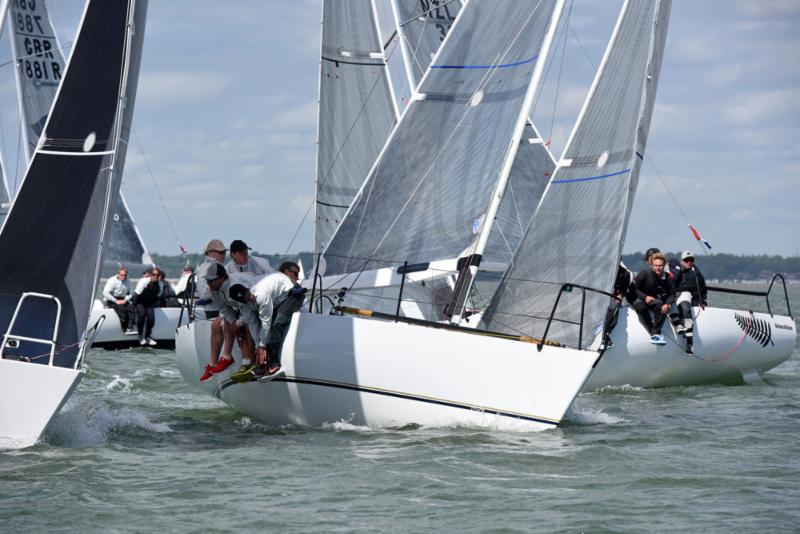 The Vice Admiral's Cup concluded today on the central Solent in lighter 10-13 knot winds, but this time blowing from the east. The leaderboard was so tight across the seven classes of one designs and level rating boats that in many, discards decided the outcome.

In the J/109s, the final day brought about a change of leader with Robert Stiles on Diamond Jem edging out David Richards' Jumping Jellyfish by a point, in turn one point ahead of Simon Perry's Jiraffe. “It has been very, very close racing,” admitted Stiles. “We won it on the last tack going into the windward mark. We are delighted to have won it two years in succession.”

Jumping Jellyfish had managed to get the overlap on Diamond Jem at the final mark of the first race to finish ahead but in today's second race Diamond Jem turned the tables.

Racing in the J/111 class also came down to the last race with Tony Mack's McFly managing to pull off the win to beat Martin Dent's World Champions on Jelvis by a point. “It has been an amazing three days,” said Dent. “There was a fantastic variety of racing – we have had all conditions.”

Today Jelvis claimed the first race after winning the pin. Prior to the second race, Jelvis and McFly were involved in a match racing style dial-up and Jelvis then sailing their opponent away from the start area only then to get held up at the start by another boat that was OCS. McFly was able to get away, also ultimately winning by just one point.

In the Quarter Tonners, Sam Laidlaw and his crew on Aguila hung on to claim the win, adding the Vice Admiral's Cup to an unbeaten run this season. This was despite the best endeavours of Louise Morton's all-female team on Bullit, which won both of today's races leaving them second, again by just a point.

“We went out to defend our second place,” said Morton. “Our hoists and drops went well and we won the committee boat at both starts. We beat Aguila in both races but there weren't enough boats in between us. We had a very strong crew: Helena [Lucas – Paralympic 2.4mR gold medallist] was on board for the last two days and was amazing on tactics.”

Bullit came out ahead on the second beat in today's first race but was leading at the first weather mark rounding in the second.

In the Diam 24od trimaran class there was an unexpected winner in Italian Riccardo Pavoncelli's Gaetana 3 after being awarded redress for a collision on Friday. They won today's first race and the Vice Admiral's Cup overall by 1.5 points from Paul Wakelin's Fluid Boat Services, Buzz. Gaetana 3 crewman Andy Greenwood said: “Today was perfect – there was less breeze than the first two days and the racing was closer because of that. And as it was day three, people were a bit more confident and there were more lead changes.”

“I am chuffed to have put in a good result in, early doors, in such a tight fleet as well,” said Mills. “Right down to the last race it was neck and neck at the top.”

The left, mainland side of the race course paid today for the FAST 40+ class and according to Invictus' tactician Robert Greenhalgh, this made the starts difficult with everyone fighting for the pin. “Then you had to sail in high modes upwind to try and peel off guys to windward of you, hopefully before you got to layline.”

Richard Powell's Marvel scored her fifth consecutive bullet in the SB20s ultimately winning by eight points from Jerry Hill's Sportsboatworld.com. However Hill fought back to claim today's final race. “It was not quite enough,” Hill admitted. “Today it was quite nip and tuck in the first race, but they got ahead and tacked on us on the first beat which meant we had to clear our air and overstood. In the second race they got nabbed on the start line and had to go the wrong way up to clear. We were just ahead at the first mark and then we managed to extend.”

Marvel was not the only boat to score nothing but 2s and 1s at the Vice Admiral's Cup. So too did Ben Meakins and the crew of Polly in the Impala 28 class, rounding off the event with two more wins. “We've had a great time – a good range of conditions,” said Meakins. “We got pushed quite hard by Two Frank yesterday. Today it was a nice wind direction and not too shifty and it was about getting your starts right. We'll definitely come back next year if we're invited. We'd hope to get double figures [entries] then.”

The Vice Admiral's Cup concluded this afternoon with a prizegiving at the RORC Cowes clubhouse.